Should Churches Have To Pay Taxes?

In Montreal, Canada, churches are becoming concerned about hosting community groups after being handed bills for municipal taxes.

Joel Coppetiers, the Minister at the Cote des Neiges Presbyterian Church, was shocked when his institution received a municipal tax bill in early 2015.

“It was the first indication that something had changed,” said Coppetiers. Many churches are reporting being saddled with tax bills that could jeopardize their ability to host community groups and leave their heritage properties vulnerable to real estate developers.

Provincial law exempts churches from paying municipal taxes, but a legal loophole is being enforced by the city in order to extract tax revenue.

“The indication is there’s not an exemption for the church as a whole,” Coppetiers said, “There’s only an exemption for those areas used for public worship and things directly related to it.” Essentially, if a space is vacant for several months or used for other purposes- personal, meetings, etc.- then it’s taxable. As a result, many of these churches that host community groups, such as food banks, Girl Guides or Boy Scouts, are facing some upcoming high taxes.

Additionally, should worship services be suspended for any reason, the parish can swiftly be taxed. When Trinity Memorial Church closed earlier this year, the city started enacting taxes immediately following the last service. As a result, the church felt pressured to sell quickly, accepting one of the first offers it received from the Stanford Properties Group within two months of closing. It’s a departure from the past, when the property would retain its tax-exempt status until a new congregation or community-oriented organization purchased it. Most of the time, this process would take years given the slower pace of decision-making on the part of organizations typically governed by a board of volunteers.

“One of the ironies here,” Coppieters told reporters, “is that while all of these great architectural gems are being lost, I know of at least 15 to 20 congregations who are actively looking for worship space...but they can’t get in there quickly enough to beat the developers.”

This issue of places of worship owing taxes and fighting the city’s exemptions office came as a surprise to city politicians, including Councilor Peter McQueen.

“Already our churches are in danger,” McQueen said. “They’re having a number of financial problems and this is a further low blow.” The councilor said his party would study the exemption issue, but said Montreal’s Executive Committee needs to step up. Montreal City Council has not yet commented on the issue, but its website says the following:

“Montreal’s City Council levies a variable rate tax on all properties situated within the city. Rates depend on property category.”

There are 1,341 buildings in Montreal that have tax-exempt status because of their religious associations, but over the last 3 years, 40 institutions lost their status because they were renting out spaces for other purposes.

“If we don’t do something you’re going to see churches closed, churches possibly torn down, heaven forbid, certainly converted away from community use,” McQueen warned. However, the move has pleased some citizens.

“Bottom line: Montreal is getting it right,” one local blog wrote. “Taxpayers should not be in the business of subsidizing religious superstition. It’s time to tax the church.”

Although I’ve been hard-pressed to find reliable numbers for Montreal itself, it doesn’t take a leap of faith to imagine the amount of tax money the city is missing out on from its churches. A recent report from the Secular Policy Institute shows that tax-exempt churches cost US taxpayers at least $71 billion every year. Religious groups receive $35.3 billion in federal income tax subsidies and $26.2 billion property tax subsidies. They also enjoy approximately $6.1 billion in state income tax subsidies, along with $1.2 billion of parsonage, and $2.2 billion in the faith-based initiatives subsidy.

Many Americans believe that churches enjoy their tax exempt status because they perform charitable works in the community. However, a report from the University of Tampa study points out that “even if churches were merely held to the standards of other non-profit agencies, this could generate $16.75 billion in tax revenue per year.” If the standard is the charitable work, why shouldn’t they be held to the same standard as other charities?

But in that strain of argument, let’s hold churches accountable for the charitable work they do. Hint: that would require drastic changes. For example, the Mormon Church spends about 0.7% of its annual income on charity. A grand total of 0.7%, while the American Red Cross uses 92.1% of revenues for physical assistance. The report goes on to discuss how Wal-mart gives around $1.75 billion in food aid charities each year- 28 times more than what the United Methodist Church gave to charity and double what the Church of Latter-day Saints gave in the last 25 years.

That isn’t to say the churches perform zero charity work. They do, but not to the same capacity or standard as true non-profits. Most religious organizations do not function like these charities though; instead, they operate more like businesses providing a service to their patrons. And that’s a key point for me: churches and other religious institutions provide services to their patrons. Not for everyone, but for their patrons. We have a huge population asking why they need to pay higher insurance premiums to ensure medical health care coverage, but these same people often don’t see the problem with churches not paying taxes despite not helping everyone? Why should the non-religious subsidize religious superstitions?

Given, church employees do pay taxes on their salaries, but clergy get a number of write-offs that most people, including entrepreneurs, do not, like their physical living expenses. The pastor at my childhood church even had the cost of his car and gas covered because he sometimes used it to visit church members. Those tax exemptions never made much sense to me; if you’re receiving a salary and these tax write-offs, then things like praying for divine intervention in healing sick children is not charity- it’s your job. That’s what they are getting paid to do. And we haven’t even started tackling missionary trips yet. 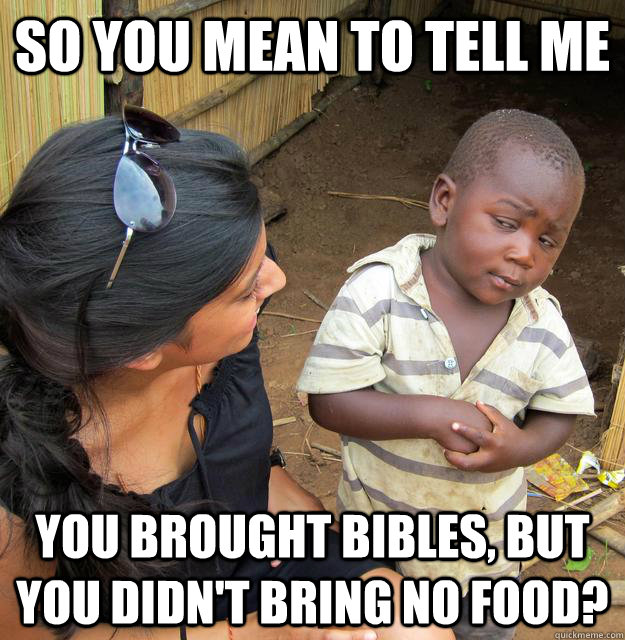 There’s a difference in providing physical assistance, and spiritual assistance, and frankly, I’m tired of the two being equated to the same degree of charitable work. Prayers may make those praying feel good about themselves for momentarily thinking about others, but what do they do in helping to eradicate poverty or feed the hungry? I’m not sure why we continue to use the two interchangeably, because they’re not the same.

Look, I’m not delusional enough to believe that $71 billion a year would wipe out our current debt total of $16.369 trillion. But it might be a start. It would force church leaders to be held accountable for what they claim they do. Of course, one of the main arguments over why churches don’t pay taxes runs along the lines of how, if we want to separate the church and state, the government has no right to collect money from the church. In exchange, the churches cannot use their clout to influence politics. But it’s impossible to believe that none of the 335,000 congregations in the US are using their resources for political purposes, especially when the Kansas governor called for a ‘Day of Salvation’ in his state and President Trump promised to destroy the Johnson Amendment that separates politics and religion.

I’m well aware that this may be the most times the term “church” has been written in one article, and for that, I apologize. Please understand that when saying “church,” I’m really referring to all religious institutions- synagogues, mosques, etc. I think in general, religious tax exemptions may have made sense at one point. During the 20th century, faith groups were instrumental in providing a variety of social services. These institutions were the hubs of most communities, offering not just food and clothing for the poor, but also counseling, values-based programs for young people, crisis intervention, and a meeting place for people of all sorts. However, all of this was done with the unspoken acceptance of religious beliefs at the core of all activities. They were places of teaching and learning to be polite, caring members of society. The majority of volunteers in hospitals, schools, senior homes, and everywhere else were members of the local church or synagogue. In those days, tax-free status could ethically be defended, because to replace the space required by groups that met in the local worship place, and to replace the volunteer hours put in by its members would have cost governments more money than writing off taxes.

Nowadays, religious institutions seem to be focused on four activities: ministering to their members, defining the boundaries of the faith, renting the facilities for profit, or repairing/renovating their buildings. Having grown up in a strict religious household, I can count on my fingers the number of times activities were organized that were focused on the community and giving; instead, it always seemed to be roundabout ways to promote the church and line the coffers. At one point, youth were speaking to the congregation about raising $50,000, so one individual could spend a year on a missionary trip. I work a full-time job, and I still don’t make $50,000 a year, but this 19-year-old wanted to travel Asia “preaching the word of God,” apparently with a lot of disposal income. Seriously? And I haven’t even delved into the fights between religion and homosexuality, sexuality, or other ‘secular sins.' It’s just too much to tackle in one article here.

Religious leaders have every right to express their opinions to their congregation, and to ask for donations to build up their church. Hopefully, some of that money will go to help the community as well. As of late though, too many have been expressing their opinions to craft legislation while influencing public sentiment. But these leaders and institutions don’t play by the same rules as everyone else. If they wanted to help the communities without an agenda, they should be willing to cough up the same amount of money in taxes as the rest of the population, because guess what? That tax money is what’s used to run social programs, build and repair roads (that the church members inevitably use) and actually help support the population.

If churches want to help everyone, they should be willing to end this tax-exemption status and start contributing financially like everyone else has to.