Secret Police and the Death of Free Speech

All good news today! But seriously, what did someone once say? Every generation needs to fight for their rights, or they'll be taken away. That's never been more true than these days.

Trump haters and Trump lovers both need to realize that a government, any government, can be used to deprive us of our fundamental human rights. It's one of the reasons I consider my faith in God tantamount to everything I do, because I believe He granted all of us unalienable rights that no human institution can deprive us of.

Even the most perfect government needs to be kept in check. This is especially true when leaders we like are voted into office. Supporters of a person must be even more skeptical and circumspect, because that loyalty can be used to mask serious breaches of power.

Loved Obama? Then you should have been aware of the many times he undermined your Constitutional freedoms. Love Trump? Then despite your hatred for the media, you should be concerned if and when he refuses to grant them access to his White House.

Absolute power corrupts absolutely. Anyone granted power over people- be they the president, legislators, or judges- can easily let the power go to their heads. Even when the motives seem good, like to protect against terrorism or provide health care for people in need, we have checks in the system for a reason. People with power must be held accountable by the people who put them in office. Otherwise scary things can happen.

Take for instance a recent bizarre process in Arkansas. The governor has opted not to sign a bill, which by their laws, allows it to go into effect regardless of his influence. The bill in question? Oh, it just allows police in the capital to operate in veritable secrecy.

The agency that protects Arkansas' state Capitol and grounds now has the authority to operate in secret after the governor let a Freedom of Information exemption become law without his signature...

As the bill is written, it would prevent disclosure of any information about the force: its size, its racial or gender makeup or any officer's salary. A similar bill extending privacy to police forces at state-funded colleges and universities received final passage in the Senate on Tuesday. (via Townhall)

What does this mean for people living in Little Rock (and college students)? It means that vital details about their police force are being kept from them. Police will be granted a certain level of anonymity, which gives them power they didn't otherwise have. As often happens with legalese, this law can be bent to grant cops the ability to operate outside of the public's knowledge, a veritable secret police force.

Supporters of such a law might claim how dangerous it is for cops in this day and age. With people on Twitter calling for cops' deaths and the regular dangers they daily face, anything that gives them an advantage to do their jobs is a good thing, right? Not if it gives police power that shields them from basic accountability.  Most citizens aren't criminals, and they have the right to feel safe from police who want to abuse their power. And they should have the right to pursue charges against cops who break the law.

The campus police bill now on its way to the governor came up after the University of Arkansas searched for ways to reject an information request from a sports photographer who wanted to know whether a police officer she had accused of rape would be working on a freelance basis at a Razorbacks football game. The school denied her request using the water-system exemption — citing a general need for public security. (via Townhall)

Yikes. The school abused the system to protect a cop accused of rape. That's not good, my friends. What other terrible things could occur if more police are granted anonymity and are shielded from the public eye?

The real problem is why Governor Hutchinson was too cowardly to sign the law or veto it. Clearly, it was an attempt to stay out of the sticky situation, for fear of losing support. Thus politics jeopardize the basic rights of Americans.

But if you're thinking to yourself, "Hey, I don't live in Little Rock. Who cares!"  Then you need to wake up a bit more, my babies. State, local, and federal legislative bodies are always looking for ways to extend their power and deprive citizens of their basic rights. Whether it's Senator Hillary Clinton's bogus anti-flag burning law from 2005 or more recent measures, legislators are more concerned with themselves than with the Bill of Rights.It looks like New York State has its own fascist dictators in the making.

In a bill aimed at securing a "right to be forgotten," introduced by Assemblyman David I. Weprin and (as Senate Bill 4561 by state Sen. Tony Avella), liberal New York politicians would require people to remove ‘inaccurate,’ ‘irrelevant,’ ‘inadequate’ or ‘excessive’ statements about others...

As The Washington Post's Eugene Volokh rages, under this bill, newspapers, scholarly works, copies of books on Google Books and Amazon, online encyclopedias (Wikipedia and others) — all would have to be censored whenever a judge and jury found (or the author expected them to find) that the speech was “no longer material to current public debate or discourse.” (via Zero Hedge)

Basically they want the courts and government to regulate what is considered acceptable speech. Anyone with half a brain can see how this piece of legislation is a gross violation of the First Amendment, not to mention that it creates a laborious and complicated process of red tape in validating books, websites, and works of journalism.

The bizarre concept of the "right to be forgotten," has no bearing on a free society. This bill is a strange attempt at erasing facts from our history, perhaps to protect disgraced, former New York politicians? But the bottom line is it's an attempt to rewrite our history. 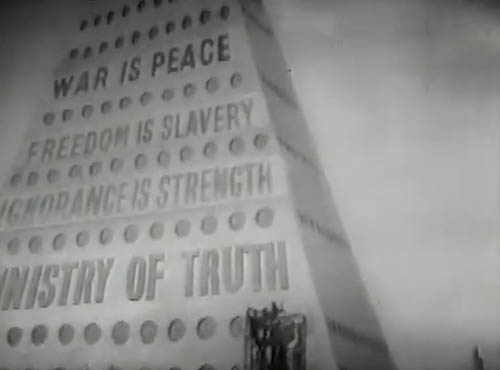 Of course, you can see how such a law will be used to abuse free speech.  If such a thing is passed, it will give license to every child molester, charlatan, criminal, or convicted con-man to fight long, dragged out court proceedings in the hopes that articles and papers that expose their past deeds are destroyed. It would also give the government the power to interfere with the media on a whole new level, not to mention attack bloggers and users on social media for their opinions.

Most likely this bill will die before ever getting far. Worst case it will be overturned by the courts. But it's not the first time unscrupulous lawmakers tried to circumvent our Constitutional rights, and it won't be the last.

What's our recourse, then? Because it has to be more than voting for someone we like come election time. Even the "best" candidates are susceptible to abuses, and do things that are shocking and unacceptable.

We need to exercise our rights on a regular basis.  We need to stay alert to the attempts at undermining our freedoms, be they of speech, religion, press, or any other. We need to hold our leaders accountable, if not through the courts, then in our regular discussions online.

The worst thing we can do is stay silent.