Schumer And Trump Are Playing A Dumb Game On DACA

Senate Minority Leader Chuck Schumer (D-NY), amid government shutdown fallout and DACA-Border Wall negotiations, must surely be losing his fair share of sleep. Outside of his private home in New York City’s Prospect Park on Wednesday, mobs of furious DACA supporters, also known as “dreamers,” descended demanding the Senator give a clear answer on his immigration stance.

“If Chuck won’t let us dream,” they chanted, “we won’t let him sleep!”

According to the staunchly conservative Daily Wire, activists created a Facebook page called “Our Lives Are On The Line, Chuck”  to spread awareness about the protests and encouraged people to rally around Schumer’s residence, demanding a clean DACA bill that provides full amnesty and legal citizenship for illegal immigrants brought into the country by their parents when they were under the legal age.

The Washington Post reports that a staggering 70% of the American public supports the DACA program and measures towards a path to citizenship, while at the same time 65% agree on a compromise that ensures more border security to prevent further illegal immigration issues. The only negatives seem to stem from the wall, gaining only a 35% approval in the same poll.

Heading into the government shutdown over DACA-border negotiations, Schumer could have used this support as momentum for a clear vision on Democratic immigration reform… and yet nothing of the sort came about. Partly because Schumer holds stranges, ever-evolving positions on these issues that can’t exactly be pinned down. 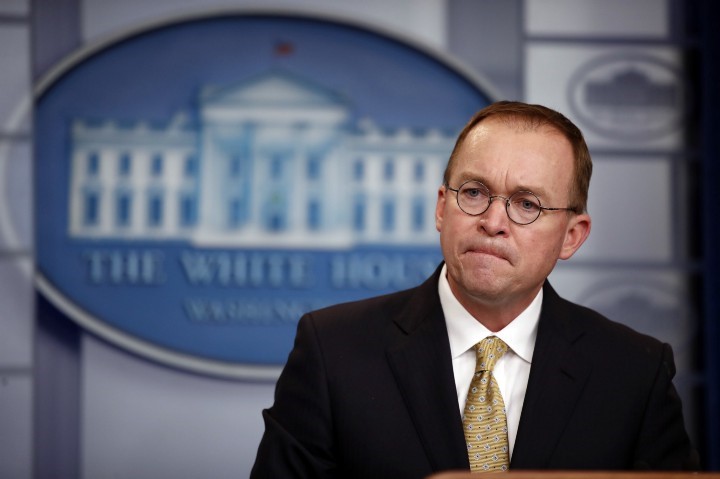 “We want our priorities funded and one of the biggest priorities during the campaign was border security,” Mulvaney said, “keeping Americans safe, and part of that was a border wall.”

What Mulvaney is citing is The Secure Fence Act of 2006, a bipartisan border security policy that was signed during the George W. Bush administration, which allowed for a 700 mile fence along the border of the United States and its neighbouring country Mexico, as well as extra security measures such as more vehicle barriers, checkpoint areas, more lighting to curb illegal immigration, as well as satellite technology to scan the area.

It is true that former Sen. Barack Obama (D-IL), former Sen. Hillary Clinton (D-NY) and her fellow New York colleague Chuck Schumer voted for the legislation, joining 23 other Democratic senators once it passed the Senate by a majority vote of 80 to 19. What isn’t true is its equivalency to the currently proposed wall.

As Politifact cited, Trump was critical of the 2006 legislation for being too ineffective and small. “Now we got lucky because it was such a little wall,” then-candidate Trump said, “it was such a nothing wall, no, they couldn’t get their environmental — probably a snake was in the way or a toad.”

By Trump’s own account, either America already has a fully constructed “wall,” in which case why does he need to secure funding for a second wall Democrats have supposedly already voted for, or in fact Democrats did not vote for a wall back in 2006 – they voted for a fence.

Regardless of this history, recent actions have brought Schumer’s moderate stance into question. Originally, Schumer proposed a $2B funding package to pay for Trump’s wall and extra security in exchange for DACA reform, the exact compromise that has a majority support sparing the inclusion of the wall.

Wait two days and, suddenly, this offer is rescinded by the Senate minority leader who is now demanding for a clean DACA bill, suddenly saying it was the president who “couldn’t take ‘yes’ for an answer”.

Cryin’ Chuck Schumer fully understands, especially after his humiliating defeat, that if there is no Wall, there is no DACA. We must have safety and security, together with a strong Military, for our great people!

Neither side is consistent about the government shutdown.

Whereas the right-wing spread the cute #SchumerShutdown hashtag, it was in 2013 when Donald Trump pinned shutdowns not just on then-President Obama, but on the president in general:

#TBT to when Trump lectured President Obama about how to negotiate a deal to prevent a government shutdown, saying “the president has to lead.” “You have to get everybody in a room” to get a deal because it’s “good for the country.” pic.twitter.com/sdtcWRrWzz

He stated the cause of the 2013 shutdown was the president failing to “lead,” to “get everyone in a room,” and to “make a deal.”

Senator Schumer, on the other hand, also showed deep discontent with government shutdowns in 2013, describing using immigration as leverage as quote “governmental chaos”:

“The basic line is: No matter how strongly one feels about an issue, you shouldn’t hold millions of people hostage,” he told ABC News’ anchor and last name tongue-twister George Stephanopoulos. “That’s what the other side is doing. That’s wrong and we can’t give in to that.”

But they have, taking their turns pointing the chaotic government finger at one another. With new reports from Politico suggesting that Democrats will give into a temporary three week budget without a DACA deal attached, citing “high anxiety” as the reason behind dropping support, and leaving dreamers relying on Senator Schumer in the same shocked state.