Richard Spencer, the alt-right’s seemingly charismatic leader, has now been accused of being “physically, emotionally, verbally and financially abusive” towards his wife Nina Kouprianova during their eight years of marriage, according to recent divorce filings reported on by Buzzfeed News.

As a notorious internet troll and an icon for white identitarians, Spencer has often framed himself as a so-called harmless champion for the far-right’s cause of American ethno-nationalism, though his wife privately described the man as quite a sinister character reportedly prone to violence against the mother of his two young, hu-white children.

Kouprianova, who married Spencer back in 2010, made allegations of “being hit, grabbed, dragged around by her hair, held down in a manner causing bruising, and being prevented from calling for help,” in the context of court documents their lawyers attempted to keep sealed over three times. These motions were all denied by their judge. 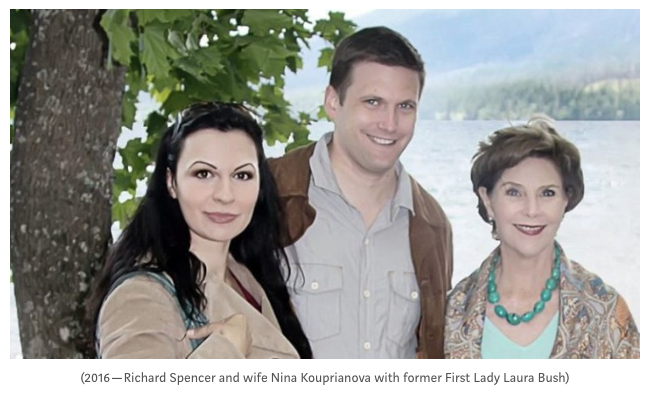 Kouprianova alleges that for years she was “reluctant to call police or seek an order of protection for fear of further reprisal by her husband,” her lawyers argued on her behalf. “Much of the abuse has occurred in the presence of the parties’ children and during her pregnancy,” the affidavit continues, claiming that Spencer once told her: “The only language women understand is violence. I’m famous, and you are not! I’m important, and you are not!” She later argued that it was his “alcohol consumption” that contributed to “this aggressive and erratic behavior and reduces his impulse control.”

The documents suggest Spencer’s “controversial public life” only worsened their relationship by making “his entire family to be targets of violence,” stating that Spencer often kept a loaded weapon in his bedroom that was “accessible by children” after his assault during the 2016 presidential inauguration. This tension is backed up in Spencer’s infamous profile published in The Washington Post where he stated his work was taking a “toll” on his marriage. “Despite the risk to his family,” Koupriianova argued in court, “[Spencer] continues to engage in extremely polarizing public speech advocating ‘peaceful ethnic cleansing’ and a white-only ‘ethno-state’ which tends to invite passions and violence.”

Spencer, of course, has denied all wrong-doing. “I dispute many of her assertions,” he said in the court filings, adding he “denies each, every, and all allegations.” In a separate 48-page affidavit, Spencer claimed: “None of the allegations of ‘abuse’ have anything to do with my children.”

He also said that his wife “obviously and litigiously tries to rope the children into our dispute by saying they were in the room next door or they overheard abusive talk.” He claims there is no evidence for these claims, though he’s sadly mistaken.

Although BuzzFeed News didn’t provide the full divorce filings for independent review, their article does cite evidence of abuse supposedly under consideration by the court. In the affidavit were accompanying email threads, text messages and recorded transcripts that corroborate her claims, also providing photos of bruises taken at the time of the incidents.

“I was very sick with the stomach flu, could not keep food or water down, and wanted to stay in bed recovering. Mr. Spencer wanted to watch a movie downstairs and did not take ‘no’ for an answer,” she wrote. “He dragged me out of bed by my arms, legs, and hair, dragged me down the stairs, and threw me onto the couch. At that point he calmed down and turned on his movie. The incident resulted in bruises.” 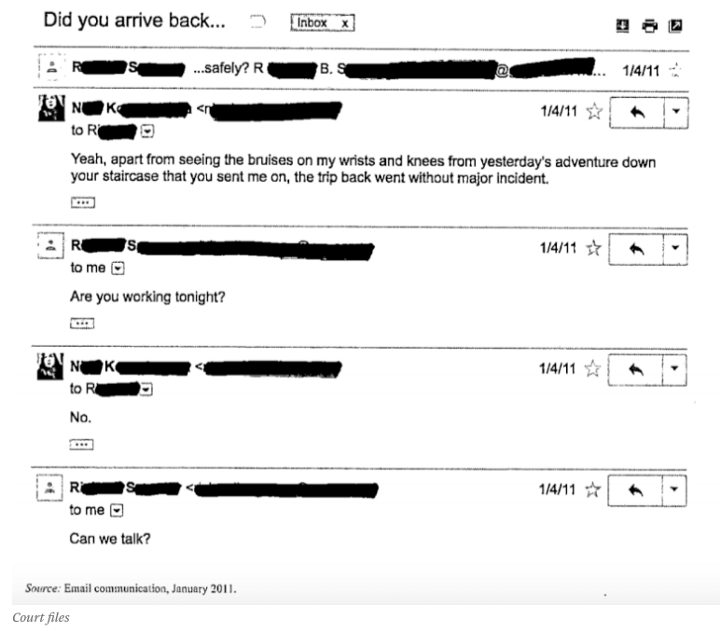 Another example was from 2012, citing several email exchanges to back-up claims of how Spencer “had me down on the ground smashing my head into the floor.” She added, “I remember feeling ashamed that the neighbors might hear what’s going on.”

By 2014, Koupriianova said Spencer “got on top of me, held me down with his bodyweight, and held me by my neck and lower jaw” when she was pregnant at the time. This pattern of abuse seemed to repeat, like always. “I am not ready to converse with you after what you’ve done. My jaw is bruised,” she messaged him. “I’m sorry, and I feel terrible,” Spencer responded. 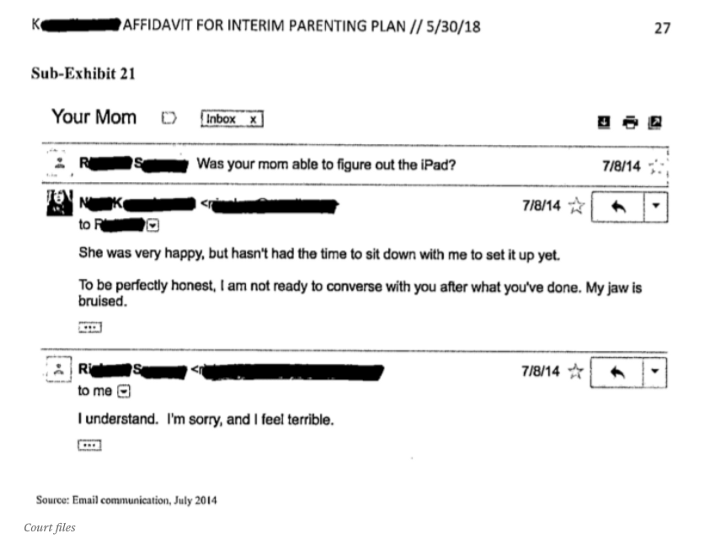 Kouprianova argued in the document that days later, during a visit to see her mother in Canada: “my mother noticed bruises on my jaw, chest, and leg. She urged me to document them. They’ve faded and yellow.” Koupriianova included the photographs in the court filings, although these weren’t published by the website. An exchange between her mother reads: 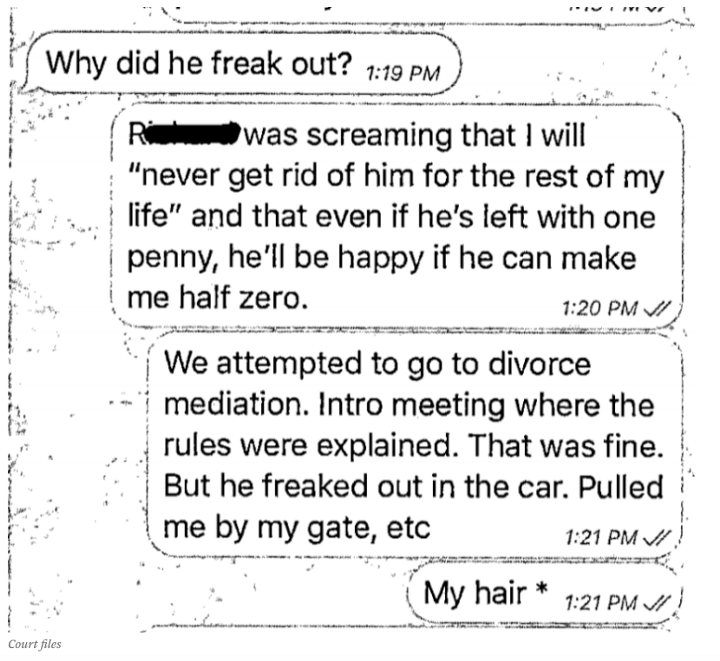 The court is reportedly also considering transcripts of abusive conversations with Spencer that Kouprianova recorded on her phone. The example BuzzFeed chose to highlight was a conversation where Spencer maliciously wondered: “Do you think your parents will attend your funeral?” 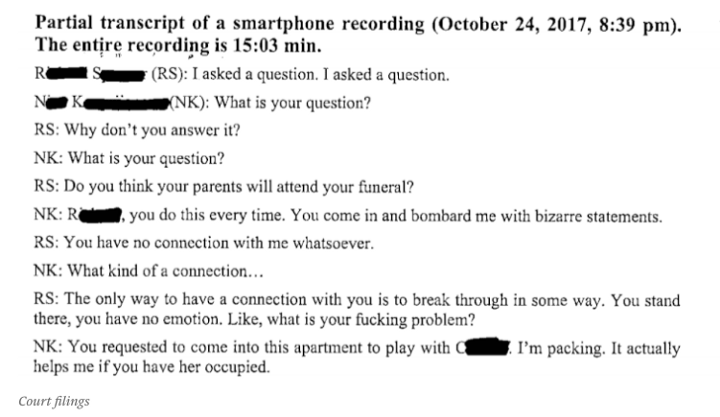 Since 2016, Spencer has become a widely controversial figure in the political era of President Donald Trump, spawning countless media thinkpieces and YouTube content that range from “the ethics of Nazi punching” to “the establishment conservative’s guide to the alt-right,” allowing varying interpretations that ask how exactly dangerous his championed movement is. Well, perhaps we need only look at its leader for that answer.

Each piece of evidence seems to provide the final nails in the coffin for this so-called peaceful narrative touted around by identitarians. After all, if this is how a man like Richard Spencer behaves towards his own wife and children, what are we to make of his plans for the enemies of his white ethno-paradise? Let’s hope this is the last we hear from Richard Spencer.