Reality Distortion Field: How Politics Can Make Your Brain Bad

I'll admit, when it comes to politics, I'm not the smartest guy.

If you want someone to talk your ear off when it comes to cartooning or which graphic design program produces the best line with a Wacom tablet (Clip Studio Pro), I'm your man.

But when it comes to politics, I don't pretend to be a Harvard scholar, or some kind of pundit that appears on cable news to spew his rhetoric. I'm simply a devoted conservative (in most areas) who feels compelled to share his views and the views of others. Maybe in hopes of balancing out the imbalance that currently exists in the media, maybe to highlight dishonesty or hypocrisy.

Sometimes I feel the need to highlight something so strange, it really defies belief.

We've seen over this past election cycle, and the many long months since, how people are reacting to Donald Trump's victory. Not just his victory, but the overall victory of the Republican Party across American. They have a majority in both houses of Congress, thirty-three governor seats, and monopolize many state senates.

I can go over why this is; how the Democrats abused their influence for so many years. How they became too comfortable, or perhaps arrogant. Or how the American people were ready for a change.

But that doesn't matter for now. What matters is how all this upheaval is affecting the brains of Americans.

I can talk about medical studies that show how partisan politics do alter our brain's functions, but we don't have to look far to see the real world impacts of this election.  There were people so invested in this election, so hung up on who would win, that now it seems their entire lives are falling apart.

I don't have to go over- yet again- the shocking reactions of liberals at the election of Donald Trump; we've all seen it. If not in your neighborhood, at least online. We get it, guys. You don't like him.

But instead of sucking it up and moving on with their lives- content with the fact that, yes, this is still America- they are allowing a man they have never met to control almost everything about them. I'm not talking about a march through Washington, or even one night of chaos. Marriages are falling apart because Donald Trump is the president.

The St. Louis Post-Dispatch recently reported that a wife has finally put an end to her 22 year marriage because of her husband’s vote for President Trump.

The anti-Trump wife is Gayle McCormick and she is a retired prison guard from California. Gayle describes herself as a “Democrat leaning toward socialist,” so she was clearly surprised when her husband revealed his decision to vote for Trump. She described the choice as a “deal-breaker.”

“It totally undid me that he could vote for Trump, I felt like I had been fooling myself. It opened up areas between us I had not faced before. I realized how far I had gone in my life to accept things I would have never accepted when I was younger.” (via Milo)

Gayle apparently has already moved into a new place and is trying to start her life over. We'll see if she can find a more sympathetic mate this time around.

Just think about this story for a minute. Her political views were so important to her (calling herself a Socialist), that she was willing to end a 22-year marriage! This isn't like that silly girl that broke up with her boyfriend over Trump's win (the boyfriend didn't even vote for him, btw). This is a husband and wife that were together for a very long time.

I'm sure psychologists would love to analyze this situation. It is the prime example of allowing short-term emotions to trump common sense and reason.

At best Trump will only be president for eight years; is that really worth 22+ of yours?

If you think this is an isolated incident, you should check out the social media reaction:

Not even gonna lie, if I found out today that my boyfriend voted Trump, it's over.

QUESTION (for those who didn't vote Trump): if you found out your boyfriend/girlfriend voted for Trump after the fact, would you leave them?

Granted that poll was only voted on by a handful of people, but it does give one pause.

Sure I wouldn't necessarily start dating someone that was a hardcore liberal, but if I was with someone for a while, I wouldn't be quick to leave them over an election. But this shows you how much stock some people put in these events. Much like the euphoria or depression that comes from your team winning or losing, these political junkies attach so much importance to an election, it can wreck their lives.

The only difference is, I've never heard of someone leaving their husband over a football game.

Resident quack Lena Dunham, who was a vociferous advocate for Hillary Clinton, has been experiencing a similar mental breakdown. In the months after the election, it seems the former actress has lost some weight.

Apparently, this wasn't because of good habits like dieting and exercise. It seems Lena is another person suffering from a sort of mental break down.

Dunham revealed the news on the Howard Stern Show... Lena said “Donald Trump became president and I stopped being able to eat food…Everyone’s been asking like, ‘What have you been doing?’ And I’m like, try soul-crushing pain and devastation and hopelessness and you, too, will lose weight.” (via Breitbart)

Wow. Soul-crushing pain? Devastation? Hopelessness? I know actors can be melodramatic, but this one takes the cake. 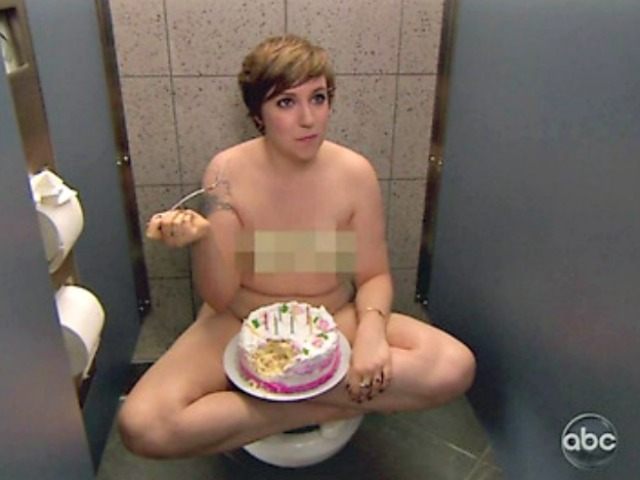 What's the deal with liberal celebrities, anyway? I wrote about director Judd Apatow gaining weight over the election, and now Lena can't put food into her face because of soul-crushing depression?

In my last piece I thought it was just a case of emotions overcoming basic reason, but now I'm thinking these people have mental disorders.

Of course, like many instances of mental breakdown, those suffering can project their issues onto others, as is the case of many leftists claiming President Trump is mentally unfit to lead the country. That's laughable, considering the things liberals have been saying and doing these past few months.

Maxine Waters, a Democratic representative from California, has been calling for Trump's impeachment since before he took office. Her wild claims are that he is unfit to serve because of the much-debunked claims that Russia "hacked" the election. Despite zero evidence that Trump was working with Russia (or even good evidence to suggest Russia did the hacking that led to the WikiLeaks findings), this Democrat is making it her life's ambition to oust this populist President.

“My greatest desire is to lead him right into impeachment," is what she literally said.

This isn't just bitter liberals attacking Trump; this isn't even Schumer's hypocritical crocodile tears. This is a true mental breakdown on the part of a losing left. How can any sound-minded person really believe they can impeach the president on such faulty claims? Even if he is impeached, it would take an act of Congress to remove him from office

A Congress that has  GOP majority.

Sounds pretty crazy to me.