The Real Enemies Are In Washington

No honest, decent, America-loving person (I’m talking to American citizens, obviously) should like the people in Washington, D.C. Liberalism and conservativism aside, they are scum.

You may roll your eyes when you hear Trump supporters chant, “Drain the swamp!” But if you really knew what went on in our capital, you’d join in on that refrain.

Washington, D.C. elitists are not like you or me. They don’t care about the Constitution, the Bill of Rights, or the freedoms and opportunities of all Americans. Those issues you care so much about, like Second Amendment rights or the environment? Yeah, they don’t care.

In fact, having feelings and caring about something is really a weakness to them. It gives them power over you. They know you care, so they will exploit it at every opportunity.

You want to protect your freedom to use a firearm? They know that and will pander to you to get your votes and dollars.

Afraid that the icecaps will melt and everyone you love will drown in ten years? Well, they won’t, but they’ll use your concern to expand their own power and privilege.

D.C. insiders are the enemy. Plain and simple. You can color the fight as Red vs. Blue. As democrats vs. republicans. But it doesn’t matter to them. They are two sides of the same coin. All that matters to the crooks in Washington is that they are holding the reins to the country and the money keeps flowing.

That’s why they all seem to hate Trump. You might hate Trump, but that’s because you’ve been duped by professional dupers.

From the moment he announced his candidacy, the insiders heard their death knell. A man like Trump, flaws and all, is much harder to control than a politician. He’s not ambitious for money. He’s not greedy for power. In fact, had he stayed in the private sector, he would have enjoyed more of both. As a private citizen, he had more power to influence things for his own betterment. In the public arena, not so much.

In contrast, career politicians are extremely vulnerable. They don’t have a massive bank account to fund their campaigns, so they need to grovel at those who do. They see public service as a means to wealth, fame, and power—not a duty to the American public. So they are easily corruptible.

Trump’s not a perfect man, but he’s much harder to control. Plus he’s stubborn as hell. This made him enemy number one among not just you Bernie-slathering hippies, but among the starch-shirted Republicans on Capitol Hill.

These pasty-faced, pill-popping elitists are the real enemies of our democracy. It doesn’t matter if they’re liberal or conservative; they will pander to whomever has the biggest checkbook, parties be damned.

They hate and fear Trump because he is not one of them. He’s not interested in playing their games. Plus, he’s promised to radically reform the sick environment in which they thrive. Not to mention all of his campaign promises that would undermine the elite’s plans to further plunder America.

Bring jobs back to America? That would hurt big business that thrives off cheap labor and liberals who want to expand Socialist progams. End illegal immigration? Same thing. Fight terrorism? That would end the climate of fear politicans use to manipulate the masses. And on and on.

That’s why their buddies in the mainstream media are so hell bent on discrediting Trump. That’s why there have been leaks coming out of the White House. That’s why we see even established Republicans like John McCain, Paul Ryan, and Lindsey Graham frequently speak out against the president. Many, many people are feeling the squeeze because we have a man in the White House who means what he says.

Don’t believe me? Just look at how these swamp dwellers behaved, over a Senate hearing.

Former FBI Director James Comey, who was fired by President Donald J. Trump, will testify before the Senate Intelligence Committee on Thursday morning–and Washington, D.C., elites are gathered at their favorite watering holes throughout the city to watch the giant nothing-burger testimony...

Union Pub, a landmark Washington, D.C., bar across the street from the Heritage Foundation on Capitol Hill, is offering all patrons who come here to watch the testimony free drinks whenever President Trump Tweets about the Comey hearing throughout its duration until 4 p.m. (Breitbart)

That’s right, the people responsible for the day-to-day management of the UNITED STATES GOVERNMENT were gathering in bars around D.C. to get drunk. Over a Senate hearing. At ten in the morning.

If you are feeling a healthy dose of WTF you’re not alone. These are people are the “future” of our country. Men and women, mostly in their twenties and thirties, who work with elected officials, manage their offices, write their memos (and laws), and generally do the work of Washington. They all got together to celebrate what they thought would bring about the end of the Trump administration.

Spotted at Duffy's Irish Pub in North DC:
"Comey is my homey." pic.twitter.com/kvGuaqEqsd 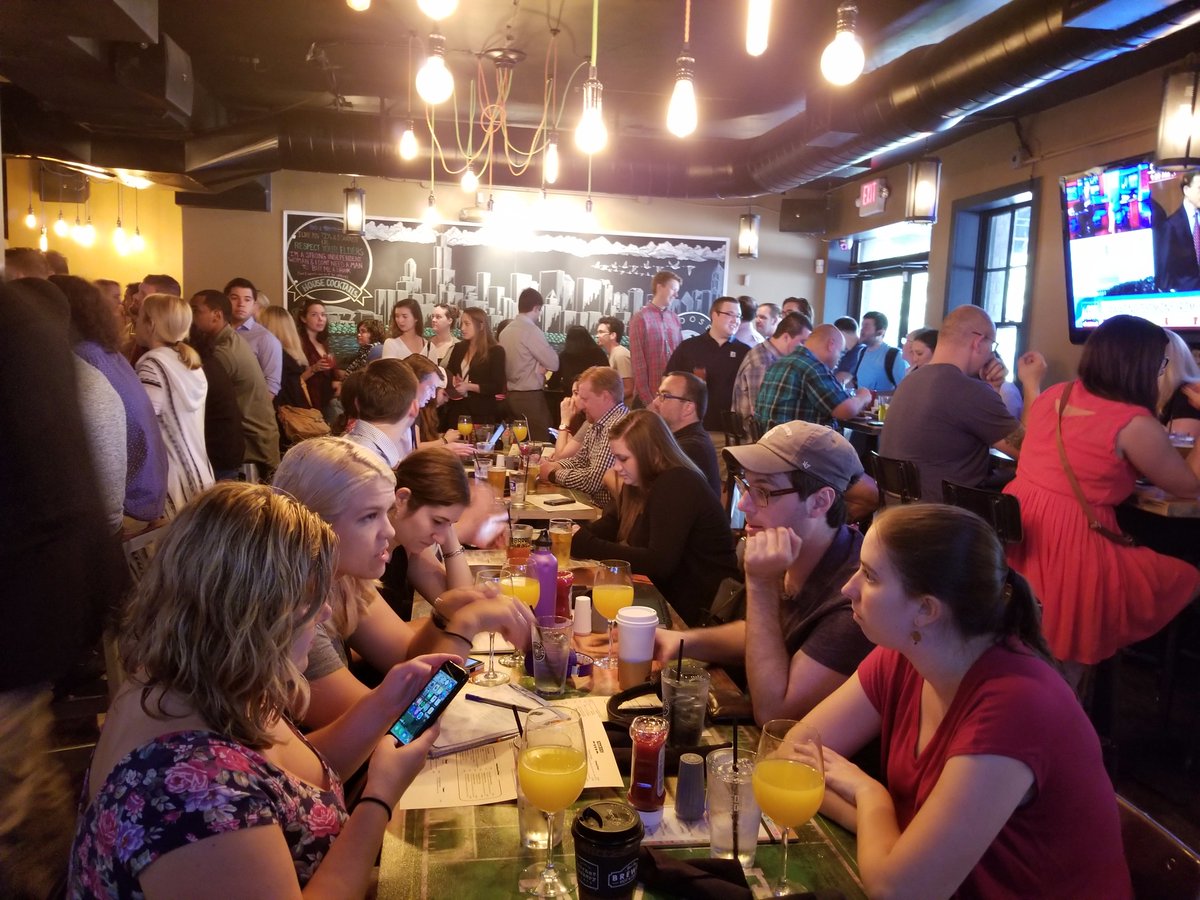 Um guys? SHOULDN’T YOU BE AT WORK?

I mean, sure. Most of us can skip work and get drunk in the morning and be okay, right? I know my brother in law who installs cable can’t do that and not worry about getting fired. Or my friend who manages a retail store. Or anyone in a normal office. The folks in D.C.? Getting drunk in the morning is fine!

These D.C elites were so deluded into believing the lie about Trump and Russia, they were actually celebrating. Here’s a tip: don’t announce your victory before the treaty is signed. Big mistake.

But why were the D.C. insiders—both liberals and conservatives alike—so quick to celebrate Comey’s hearing? They were convinced that Comey had dirt on Trump that proved the president obstructed justice, was under FBI investigation, and colluded with Russia.

What did we learn? Trump only said he “hoped” Comey could look past Flynn (not order him to stop investigating). Trump is not being investigated by the FBI (the reason libs claim he fired Comey). And there has been no evidence to suggest Trump or his team worked with Russia to tamper with the election.

BONUS: no votes were tampered with. So you can shove that in your pipe and smoke it.

The only reason people believed Trump was guilty of wrongdoing was because a few newspapers claimed it was so. Based on nothing but “anonymous” sources. Sources that Comey tore to shreds.

(Comey threw everybody under the bus, by the way. The press, Obama, Lynch, Clinton, even himself).

Without real evidence, the mainstream media have been pushing obvious lies. Most of us were able to see through it. Not liberals though (who were obviously looking for an excuse to destroy Trump) or the elitists of D.C.

They were so poisoned by their hate for Trump that they couldn’t even think—for one moment—that the New York Times and Washington Posts stories were obvious fabrications.

To be honest, I’m sure most of the insiders knew they were lies. They were the ones pushing them in the first place. But they were corrupt enough to believe their lies would become reality. They pushed the idea that Trump and his team worked with Russia so much, that they actually expected the FBI to find evidence.

Maybe a few hoped the FBI would fudge some evidence, or that the bad press would be enough. But I’m sure enough insiders drank their own Kool-Aid to the point where they were believing it.

It’s something I noticed during the election. Hillary Clinton and many liberals (really any corrupt politician) have a knack for pushing lies so much, they lose the ability to distinguish them from reality. They believe their own fantasies. How else could you describe the shocking upset (to them) on November 8? They were convinced Trump would lose, to the point of being unable to see what was unfolding across America. A movement against insider politics that would usher in a new era for D.C. and our country.

Now we are seeing them flounder, once again, thanks to their own lies. They invented the idea that Trump was colluding with Russia. Hillary invented that during the campaign and the left and insiders have been pushing it ever since. Based on what? Evidence? Documents? Real facts or testimony? Nope!

It’s worked in the past. Their lies ruined George W. Bush’s presidency and legacy. Their lies helped elect an unqualified senator to the White House. Their lies still protect a health care system that is destroying communities.

But now the lies are finally unraveling. As new sources for information continue to usurp the old ones, the elitists of our country have less means of controlling what we think.

Social media, alternative news sites (like TrigTent), and other online outlets are able to say what the mainstream media tries to keep silent. Oh, but don’t worry. They’re trying to control us too.

Regulation, censorship, and manipulative policies daily get thrown at the Internet, in the hopes that the genie can be put back into the bottle. But as someone once said, “There’s no going back. You’ve changed things, forever.”

So what are we to do, in light of this knowledge? Well, I hope we can get a better perspective on what’s going on in our country. I’m a staunch conservative and I will always speak out against what I believe is bad for our country. But I’m not naive enough to believe the fight is as simple as Red vs. Blue.

Liberal readers should do the same. Your enemies are not gun-toting, beer swilling good old boys in pickup trucks. Nor are my enemies, really, hemp wearing, shaggy headed San Franciscans. Our true enemies are the power-hungry, soulless, hypocrites who flock an old swamp fed by the Potomac.

Our true enemies are people who masquerade as our friends but wish to rob us of our freedoms, so big businesses, foreign nations, and corrupt interests get rich.

Our real enemies are those assholes who get drunk at 10 in the morning, celebrating the potential fall of an elected official.