Racism And Corruption Are Alive And Well In D.C.

Although the horrific results of last week’s election are still giving many folks nightmares about the reality of a Donald Trump Presidency, things looked like they might be calming down a bit by the end of last week. There was a brief moment of hope and optimism as Trump made a subdued, gracious acceptance speech. We had the vain hope that perhaps all the vicious rhetoric he had spewed during his campaign was just that: campaign talk. However, late Sunday, Donald Trump began announcing his team. 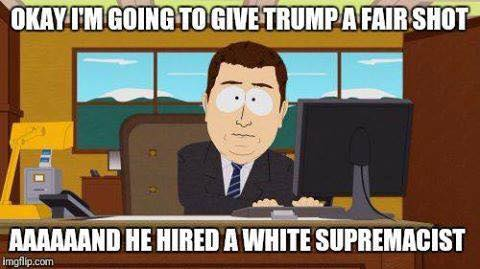 Batten down the hatches; it’s going to be even worse that we feared.

Do not mistake Bannon and Breitbart News for a reliable news source. “We’re the platform for the alt-right,” Bannon said in July. That’s not something to brag about, Bannon. The term “alt-right” was coined by one of the most bigoted, racist, white supremacists in America, Richard Bertrand Spencer, who advocates for an Aryan homeland and calls for “ethnic cleansing” to halt the deconstruction of European culture. Associating yourself with Spencer is not something to be proud of, but hold the judgemental horses, because we’re not done yet. Bannon’s former staffers report that he “aggressively pushed stories against immigrants, and supported linking minorities to terrorism and crime,” while simultaneously being accused of anti-Semitic remarks. Under Bannon, Breitbart published: a call to hoist the Confederate flag high only two weeks after the Charleston massacre, advised female victims of online harassment to “just log off” and stop “screwing up the internet for men”, published an extremely anti-Muslim piece that claimed rape is integral to Islam, compared Planned Parenthood’s work to the Holocaust, and has been praised numerous times by the Ku Klux Klan.

Just reading through the articles listed above made me physically sick. I honestly thought the reports were exaggerated, but they aren’t. I strongly believe all sides of a story should be presented, but even now I find myself extremely reluctant to provide the links to those Breitbart pieces because I cannot believe such unfounded and hateful words were published for anyone to read. I don’t want to drive traffic to their site, but if you don’t believe me about the content of those articles, there’s the proof. It’s just as grotesque as everyone is claiming. Even loyal Republicans are expressing concerns over Bannon’s appointment.

In comparison, Reince Priebus’ appointment as the White House chief of staff is almost demure. It was a safe choice- Priebus has deep ties in Washington.

Priebus’ appointment is a traditional choice for this influential position, an olive branch to the Republicans who control both houses of Congress. If Trump truly wants to pass his legislative agenda, he will need their support. But Priebus only ran for public office once- and lost. In 2004, he lost a seat in the Wisconsin State Senate. He may be well-versed in the methodology of politics and possess close ties to House Speaker Paul Ryan, who was one of the first Republicans to make his displeasure with Trump known. Only 44, Priebus is regarded for his low profile and humility, especially as the longest-service RNC chairman, and is seen as one of the few working to modernize the Republicans. He almost seems the exact opposite of Trump and Bannon.

Make no mistake, though. Priebus may not carry the same degree of controversy Bannon does, but minorities, women, and the LGBTQ are not safe with Priebus alongside Trump. He has already made it publicly known that he believes marriage should only be between a man and a woman, and that the war on women is completely fictional. He is strongly pro-life, stating that if “you’re pro-abortion...you might not be Republican,” but has actively dodged questions regarding Planned Parenthood and abortion clinics. That’s reassuring, I suppose; dodging questions and providing non-answers is typical politician behavior.

Trump announcing Bannon and Priebus together might be a stroke of genius on his part, though. Support for Priebus is abounding due to Bannon’s volatile nature and blatant racism. After all, any politician looks great next to Bannon.

“He is a normal guy,” well-known Republican correspondent Ana Navarro said. “He doesn’t assault women, he is not anti-Semitic and anti-immigrant. At this point, I’ll take him, and I’ll love him.”

As countless sources have observed, choosing Priebus as the chief of staff may point to the influence Trump’s children have over him, as his daughter Ivanka Trump was a champion of someone less controversial for the important position. However, his appointment of the two men is reminiscent of his rival-driven business model for his casinos and The Apprentice reality show. It would seem he is attempting to combine a Washington insider with the scorched-earth style confrontations of Bannon to “drain the swamp,” as he so often claimed he would over the last few months.

Except that’s not true. Looking at Trump’s cabinet so far, nausea grows to full-blown hangover status, just without the fun from the night before. The list of lobbyists inside his team includes: Cindy Hayden of tobacco company Altria, Steve Hart, the chairman of the Williams & Jensen firm, and Michael McKenna, who lobbies on behalf of Dow Chemical. Trump’s administration has also reached out to Jamie Dimon for Treasury Secretary- you know, the JPMorgan Chase CEO who was central to the 2008 economic crash? The guy whose company just got fined $200 million for an unethical practice of hiring 200 employees through his “Sons and Daughters” initiative which gave work to the children of international governments (i.e. China) to win business with the parents.

Yeah, Trump is clearly working against the establishment and fighting to break down corruption in the country by hiring these guys. He’s the exact opposite of “crooked Hillary,” right? What’s the turn of phrase... something along the lines of you become who you surround yourself with...?

During his interview on 60 minutes which aired this Sunday, Trump told his supporters to stop harassing minorities. However, Trump needs to practice what he preaches. He unleashed feelings of racism, sexism, and division in the United States with his campaign, provoking hateful, violent, and discriminatory acts the likes of which we haven’t seen in decades. He needs to stand up and unite Americans now, but with the appointment of Bannon and Priebus, Trump has already broken his promise to “serve all Americans” and “bind the wounds of division.” He’s starting to surround himself with the exact type of questionable lobbyists and personnel who have proven time and again that they only want to further their own wealth. He’s given himself two advisers: Priebus, to whisper the wishes of the Republican House and Senate to him, and Bannon, to scream advice at him from the angry white supremacists.

Be afraid. Be very afraid of what the next four years will hold, because we have no idea who Trump will- or will not- listen to.