The FAKE NEWS media (failing @nytimes, @NBCNews, @ABC, @CBS, @CNN) is not my enemy, it is the enemy of the American People!

From the highest office in the land, President Trump declared a select few mainstream news outlets America’s next political targets: “The FAKE NEWS media (the failing @nytimes, @NBCNews, @ABC, @CBS, @CNN) is not my enemy,” the president tweeted, “it is the enemy of the American People!”

It’s debatable whether he sought to have their heads on spikes, to enact censorship from big government or, what’s more likely, to discredit their reputations in the court of public opinion. But what’s undeniable is the White House has declared its enemy, and it’s the liberties that are afforded by the First Amendment of the United States.

There’s no question mainstream news media hold values that are antithetical to the majority of the American people. There are countless studies showing the disapproval of modern U.S. journalism, even when they’re compared to the Trump administration’s serial liars, and their insistence on avoiding coverage of the issues and politicians considered more concerning to voters. This isn’t a controversial opinion from some activist. It’s just the reality when large corporations, from MSNBC to Fox, are the ones curating your news.

That said, does an establishment bias make press censorship justifiable?

Through the eyes of Republican voters, yes.

According to a new Ipsos poll released last Tuesday, over 43 percent of GOP voters believe that President Trump “should have the authority to close news outlets engaged in bad behavior,” while only 36 percent outright disagreed with this statement. This was followed up by the vast majority of Americans, 72 percent, who think “it should be easier to sue reporters who knowingly publish false information.”

The poll, which was first reported on by The Daily Beast, surveyed around 1,003 American adults with online access from Aug. 3 to 6. A large number of Republicans, 48 percent, were quick to agree with the president’s broad statement that the media is “the enemy of the people” (meanwhile just 28 percent disagreed) and 79 percent said mainstream media outlets treat Trump “unfairly.”

These views even grew some bipartisan support.

All told, Republicans would surely back a presidential media purge; they’re joined by 12 percent of Democrats and 21 percent of Independents who believe the president and the executive branch should have unilateral authority to close down certain news operations. No matter how independent these organizations are, there’s grassroots support behind Trump crushing press liberties should they “engage in bad behavior.”

What’s defined as bad behavior, however, isn’t certain. The Constitution clearly defines the “freedom of the press,” guaranteeing citizens the right to freely exchange information across the nation without oversight, though these results show a new attraction to totalitarian gatekeeping. It just so happens Republicans are falling in line with the government’s anti-press agenda more than the center-left.

Remember this is the same “pro-liberty” party that is rallying behind InfoWars’ host Alex Jones, The Daily Wire’s Ben Shapiro and comedienne Rosanne Barr when it comes to censorship from social media, public and private university campuses and television networks. Sound the alarms when the judge, jury, and executioner isn’t wearing that big red #MAGA hat. When it’s a Democrat, a liberal or — heaven forbid — a socialist, it’s wartime.

Inconsistency aside, there are countless arguments to be made that the corporate mainstream media is corrupt, lies by omission and sometimes engages in behavior clearly aimed towards political gain. There’s evidence showing journalists collude with government agencies, billionaire private executives and donate mountains of cash to political candidates, evidenced in the 2016 Clinton presidential campaign taking over $382,000 from 430 mainstream “journalists” in just a few months time. 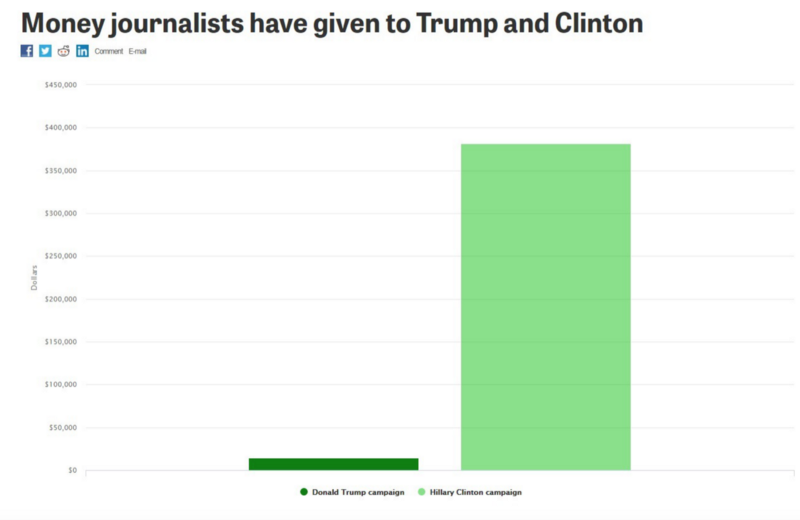 This can all be true, yet it doesn’t make the principle of censorship any less egregious. The idea that information, from the president’s conflicts of interests to his scoops of ice cream, must go through the state as the all-powerful editor, is so incredibly insane on its face that it shouldn’t need explaining. If you don’t see the propaganda problem here, you’re simply not paying attention.