These days, you’ll easily get out of a speeding ticket in Bunker Hill, Indiana.

On Dec 12, every police officer in the small town of around 900 people submitted resignation letters and walked off the job. The marshal and four reserve officers cited ethical and immoral issues with the town council as one of the main reasons. Though they didn’t want to, all of the officers stepped down because they felt it was the right thing to do. Now the town is in a bind, relying on the Miami County police force while they search for a whole new police department. 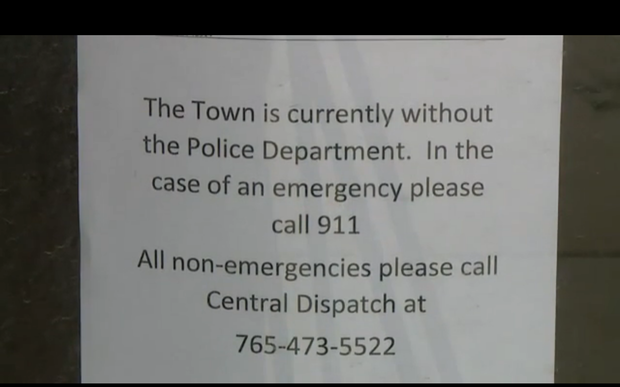 “We have had issues with the town board and there are some activities there where I felt like they were serving their own agenda,” said former Bunker Hill Town Marshal Michael Thomison, “They would not communicate with us or the officers and they kept scaling back.”

Thomison had served as town marshal for four years until that Monday night. He and his former colleagues allege the town - after cutting them from 9 to 4 four deputies -  forced them to share only one set of body armor among the five of them, which is against IC Code. However, the Bunker Hill town council contradicts that statement:

“The current town council as well as prior councils have, on occasion, had disagreements with Mr. Thomison over a number of things. These disagreements have primarily been caused by the lack of funding available to the town to invest in the police department. However, the council denies that it has failed to provide body armor for the marshal or reserve deputies.”

Of course, this could be viewed as a calculated denial. The former police force also claims the town council asked them to do questionable and illegal activities, such as running criminal background checks on other board members.

“They would ask for things and I would have to explain to them, ‘You can’t have this information,’” Thomison stated. “In my opinion, they were fishing for information and cases against other people. I told them, ‘I can’t turn that over. What you’re asking me to do is illegal.’ And they said, ‘Well, are you refusing a direct order? Because if you are, you could be fired for that.” Instead of battling the councilors, Thomison shared that information with state police.

It gets worse. Last year, Thomison was diagnosed with cancer, but following his successful treatment, he was told the town would only allow him to return on a part-time basis.

“They came at me and said it is costing the town way too much money because of my insurance, and they said, ‘We are taking you down to part-time,’” Thomison claims. He plans to file a lawsuit against the Bunker Hill town councilors in the future.

Thomison and the police aren’t the only ones unhappy with the town’s administrators, though. Citing personal reasons, Council Vice President Jim Panther submitted his resignation, which will take effect at the end of the year. Additionally, the Bunker Hill Building Commissioner Bill Gornto’s departure leaves the town without a building department. “Due to the actions of the current town council, I find myself unable to continue in this job,” Gornto wrote in his resignation letter.

"The town has refused to educate themselves on how to run a town," Thomison told the Tribune. "They continue to carry out their personal agendas to either run off the police department or make it so that it is impossible to work with or for them."

A week later, Bunker Hill is still struggling to rebuild their force, and residents are concerned about the negative effect the council is having on their town.

Given all the shitty news coverage of police over the last few years, it’s nice to hear of the police in Bunker Hill taking a stand for the right thing. But what’s more curious to me is the lack of support other officers have publicly shared, especially the Blue Lives Matter movement. I had to search long and hard before I found their statement on the matter, which has the tiniest blurb about their opinion:

“We think it is unconscionable in today’s society to refuse to provide current, updated body armor for Police Officers. It also is unethical and illegal to ask an Officer to run someone’s criminal history for personal, non-criminal reasons.  It is troubling to think of the hostile work environment that the Officers had to work in. Finally, reducing an Officer to part-time because of the costs of the medical treatment for his cancer?  We support these former Bunker Hill Officers and Town Marshal in their resignation.”

That’s it. That’s literally it. Everything else is just a rehash of events. You’d think an incident like this would bring fellow police officers out in droves for support. But unfortunately, there doesn’t seem to be all that much unity within the ranks of police either. With mass exoduses from police departments in Dallas, Green Mountain Falls in Colorado, Baltimore, and prominent Chicago police officers speaking about quitting, I’m beginning to wonder what on earth is going on with American police forces. But then again, perhaps they’re choosing to show the same solidarity Bunker Hill’s deputies expressed by resigning with their Marshal Thomison.

There is something flawed about our current policing and justice system. And maybe law enforcement themselves are finally catching on.