In addition to the actual wildfires spreading across the Pacific Northwest, exasperated officials in Oregon are currently attempting to deal with inflammatory rumors that are spreading online about the cause of the crisis.

Officials have turned to Facebook to try and quell a barrage of competing conspiracy theories that have blamed both far left and far right activist groups for fires that have burned large areas of Oregon and Washington.

A post released by the Douglas County Sheriff’s Office has called out a particular viral false rumor that involved 6 Antifa members being arrested for arson in the county:

“Remember when we said to follow official sources only. Remember when we said rumors make this already difficult incident even harder? Rumors spread just like wildfire and now our 9-1-1 dispatchers and professional staff are being overrun with requests for information and inquiries on an UNTRUE rumor that 6 Antifa members have been arrested for setting fires in DOUGLAS COUNTY, OREGON. THIS IS NOT TRUE! Unfortunately, people are spreading this rumor and it is causing problems. Do your part, STOP. SPREADING. RUMORS!” 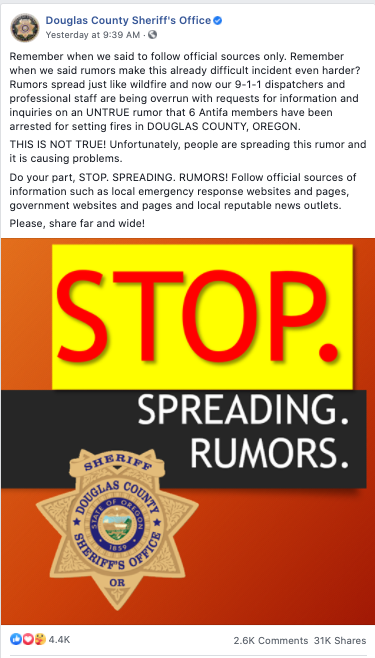 Rumors about the Proud Boys:

A similar rumor emerged about the right wing group “The Proud Boys” claiming that 5 people had been charged by Medford police with starting fires. A viral post using a fake graphic and appropriating the image of the police department’s crest was later debunked by the real Medford Police Department:

“This is a made up graphic and story. We did not arrest this person for arson, nor anyone affiliated with Antifa or “Proud Boys” as we’ve heard throughout the day. Also, no confirmed gatherings of Antifa which has also been reported. Please flag or ignore this post if you see it.”