ONLY Atheist in Congress: “There’s Too Much Religion in Politics”

Faith on Capitol Hill is finally on the decline.

In a new interview with The Washington Post, California’s Representative Jared Huffman revealed that he is the only member of Congress, comprised of 435 representatives and 100 senators, to be an open “nonbeliever, a skeptic.”

For years, the Congressman has been asked regarding his religious beliefs and has often given the answer “none of your business.”

On The Daily Show with Jon Stewart, in the old “Better Know a District” segment, Huffman told then-correspondent Stephen Colbert that he was a potential “agnostic.”

COLBERT: I see you’ve listed your religion as “Unspecified.”

COLBERT: Would you like to re-specify as Roman Catholic?

HUFFMAN: … nothing against Roman Catholics and I love your new Pope…

COLBERT: Thank you very much. “Unspecified.” C’mon, grow a pair. What is it? What is it? Are you an atheist?

COLBERT: What is an Agnostic but an atheist without any balls?

COLBERT: [Smiling] I see you’re choosing not to specify your response to that “Unspecified.” I’ll just put you down for heathen-slash-hellbound.

Now, the Congressman isn’t holding back. Speaking to The Post’s Michelle Boorstein, Huffman revealed he is the only open “humanist” to currently hold Congressional office.

“I don’t believe in religious tests, and I don’t believe my religion is all that important to the people I represent,” he continued, “and I think there’s too much religion in politics. For those reasons I felt good about not even answering it.”

With grace from The American Humanist Association, the definition of humanist reads: “a progressive lifestance that, without theism or other supernatural beliefs, affirms our ability and responsibility to lead meaningful, ethical lives capable of adding to the greater good of humanity.”

Huffman confessed he wanted to make sure the reveal was politically sound, Boorstein noting Huffman consulted his wife before the reveal. Having grown up in a very religious home — his family devote Mormonism separatists — Huffman didn’t feel entirely comfortable with the source of his internal values. He then clarified he is not “hostile” towards religion and doesn’t judge other people’s religious views.

“I’ve seen religion wielded in such negative ways around here, lately. [President] Trump does it all the time, so implausibly.”

Huffman added that he felt labels like “non-religious” and “Agnostic” also applied.

And this seems to be as close to representation that atheists, agnostics, and non-religious individuals have in the Senate. According to Boorstein, Huffman is only the second member of the American Congressional branch to describe himself as non-religious and non-theistic.

The first was another Democratic Representative for Northern California, named Pete Stark, who revealed he was an atheist.

“Historians debate the specific spiritual views of the earliest members of Congress,” Boorstein explains, “and records for many are thin.” 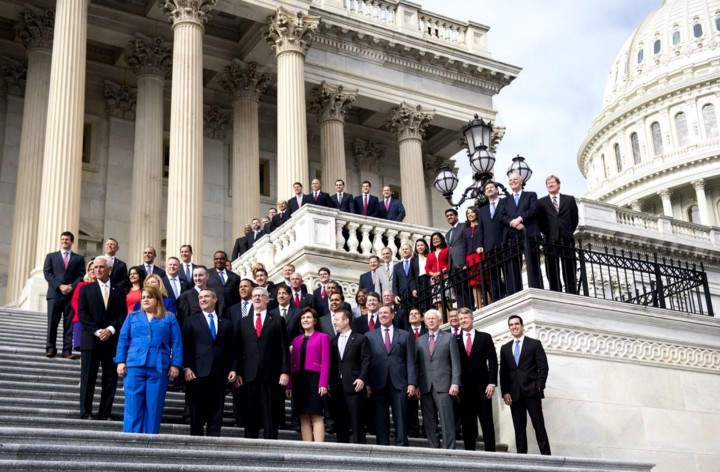 Huffman’s revelation comes after a PewResearch study last month which discovered, at the time, no members of Congress, whether it was The House of Representatives, The Senate, The Judicial Branch, or the Presidency, were in any way non-theistic or non-religious:

Of the 293 Republicans elected to the 115th Congress, all but two identify as Christians; Jewish Republicans in Lee Zeldin of New York and David Kustoff of Tennessee, who both serve in the House.

Of the elected Democrats in Congress, they are also overwhelmingly Christian (just at around 80%), however, they branch out into more diverse groups. The 242 Democrats include 28 Jews, three Hindus, three Buddhists, two Muslims and one Unitarian Universalist — as well as 10 Democratic members of Congress who declined to state their religious affiliation.

Not a single member of Congress said they didn’t believe in God. Until now.

“I suppose you could say I don’t believe in God,” Huffman smirked. “The only reason I hesitate is — unlike some humanists, I’m not completely closing the door to spiritual possibilities. We all know people who have had experiences they believe are divine … and I’m open to something like that happening.”

Under a poll, Huffman would most likely be listed under the category of “none” if a religious poll is taken. Him being the only “none” member of Congress is concerning when you realize the American people, by at least 20%, do not have a religion of any kind.

One man, of over 500 elected officials in a country of 300 million, openly reflects 20% of the nation when it comes to religion.

That’s a grand representation deficit if there ever was one.