President Donald Trump, the self-described self-made billionaire of the United States business class, is currently under investigation by government tax authorities of New York state following a recent New York Times report revealing he’s received over $413M in modern USD through his father’s real estate empire, much of it reportedly obtained by using fraudulent tax dodging schemes since the 1990s.

The Times investigation was conducted over more than a year, and a documentary short on the process, entitled “The Family Business: Trump and Taxes,” will air Sunday on Showtime. As of now, the newspaper has only released some of these records to the public for factual curation — which could result in legal consequences — though what they’ve presented appears to show the president once assisted his beloved parents, Fred and Mary Trump, in the art of tax evasion. These schemes include improper tax deductions, severely undervaluing their properties on the market (only to sell big later) and a plan to establish a sham corporation to disguise millions of dollars in personal gifts, which was passed down to the siblings over decades.

The Trumps’ methods were apparently so effective that the siblings were able to secure over 295 streams of revenue from their father over a five-decade span. While the Internal Revenue Service (IRS) paid no attention, the Trump siblings saw over $1B in wealth transferred to their accounts upon the death of their father in the 90s, which would have been $550M under the previous 55% tax on such gifts and inheritances. Instead, the family paid the peanut-sized $52.2M, which amounts to just 5% in tax.

This is due to the drastic undervaluing of their father’s estate, presenting themselves as humble millionaires on paper, valuing each of these businesses at around $41.4 million in a 1995 tax return, and later selling them off over the next 10 years for 16 times that amount.

“I built what I built myself,” Trump has always told reporters, claiming his organizations began with a mere ‘small loan’ of $1M.

“I got peanuts. My father didn’t leave a great fortune. It was Brooklyn and Queens real estate. I built this empire and I did it by myself. Nobody did it for me… I got a very, very small loan from my father many years ago. I built that into a massive empire. And I paid my father back, that loan. With interest!” 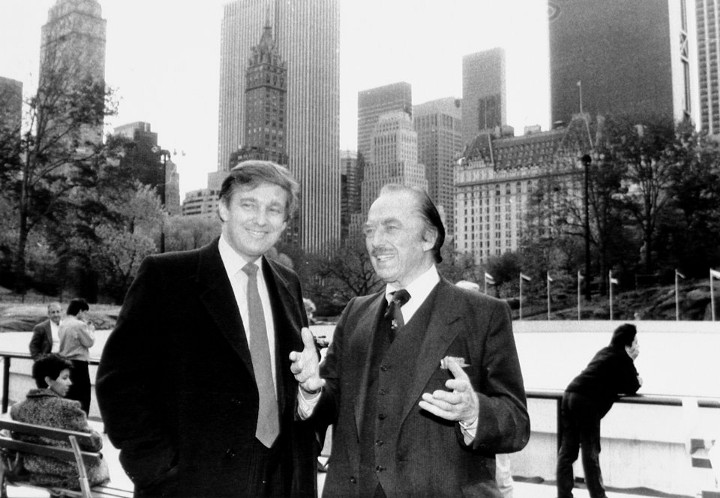 The Times claim Fred’s paternal socialism started when they were toddlers:

“By age 3, Mr. Trump was earning $200,000 a year in today’s dollars from his father’s empire,” the journalists write. “He was a millionaire by age 8. By the time he was 17, his father had given him part ownership of a 52-unit apartment building. Soon after Mr. Trump graduated from college, he was receiving the equivalent of $1 million a year from his father. The money increased with the years to more than $5 million annually in his 40s and 50s.”

“It was easy money for the Trump children,” they continued. “Their father took care of everything. He bought the land, built the apartments and obtained the mortgages. His employees managed the building. The profits, meanwhile, went to his children. By the early 1970s, Fred Trump would execute similar transfers of the other seven buildings. For Donald Trump, this meant a rapidly growing new source of income. When he was in high school, his cut of the profits was about $17,000 a year in today’s dollars. His share exceeded $300,000 a year soon after he graduated from college.”

As time went on, their profit streams only got more complex.

The journalists further explain that when Donald Trump’s finances were “crumbling” in the 1980s and ’90s, during the fall of his casinos, his father’s companies would bail him out of these troubles through payments made to all the siblings. One instance they describe was between the years 1989 to 1992, when Fred Trump’s profits were upwards of $49 million, their father decided to issue the siblings $8.3 million a pop in today’s dollars made through four companies. This is in addition to another case where, in order to help his son secure a bond payment to be made on an Atlantic City casino, their father, through “a trusted bookkeeper,” purchased over $3.5 million in unused casino chips. “It was an illegal loan under New Jersey gaming laws, resulting in a $65,000 civil penalty,” the New York Times notes, conducted in an under the table fashion just to avoid taxation. As history shows, Fred Trump, true to his word, “always wanted plenty of cash on hand to bail out his son if need be.”

This isn’t how Trump wrote history, however. “I learned a lot about myself during these hard times,” he wrote in The Art Of The Comeback, detailing his questionable success story after the casino scandal. “I learned about handling pressure. I was able to home in, buckle down, get back to the basics, and make things work. I worked much harder, I focused, and I got myself out of a box.” Or, rather, it was father to the rescue as always. All out of love, of course.

In fact, this love of family also turned into a more brazen life of crime.

The report claims the family even participated in “outright fraud” in the handling of their All County Building Supply & Maintenance company, which was formed by the Trumps in 1992 as a “purchasing agent” for Fred Trump’s buildings, “buying everything from boilers to cleaning supplies.”

According to the records and employee interviews, All County was merely used to siphon millions of dollars from Fred Trump’s empire by simply “marking up purchases already made by his employees” at other establishments. As it turns out, it was only a company on paper.

That means millions of these artificially inflated prices on other people’s acquired goods, which the newspaper described as “untaxed gifts,” were used just to increase the profits the company’s fake owners — Donald Trump, his siblings, and their cousin. On top of that, these doctored All County receipts were reportedly used to justify bigger rent increases for thousands of tenants in his 1,032 apartments. After all, why pay for the children’s gifts yourself when your sucker customers will do it for you? Paternal socialism needs someone to cough up the cash.

A White House lawyer, Charles Harder, of course denied that his client had any role in devising these tax strategies for Fred Trump’s estate, disputing any and all assertions the Trump family have done wrong:

“Should the Times state or imply that President Trump participated in fraud, tax evasion or any other crime, it will be exposing itself to substantial liability and damages for defamation,” Mr. Harder said in a statement, as reported by The Guardian. “The New York Times’s allegations of fraud and tax evasion are 100% false, and highly defamatory. There was no fraud or tax evasion by anyone. The facts upon which the Times bases its false allegations are extremely inaccurate.”

The president initially declined to comment, taking to his Twitter to write: “The Failing New York Times did something I have never seen done before. They used the concept of “time value of money” in doing a very old, boring and often told hit piece on me. Added up, this means that 97% of their stories on me are bad. Never recovered from bad election call!”

Trump is deploying his often used ‘fake news’ and ‘the polls were wrong’ deflections, when the real issue isn’t being refuted. As much as this argument somehow makes sense to his loyal, sycophantic base of supporters, it won’t work for New York investigators seeking civil lawsuits.

They write: “The tax department is reviewing the allegations in the NYT article and is vigorously pursuing all appropriate avenues of investigation,” the New York State Department of Taxation and Finance told the Washington Post. They were joined by Mayor Bill de Blasio (D-NY), a vocal critic of the president, who tweeted: “I’ve directed NYC’s Department of Finance to immediately investigate tax and housing violations and to work with NY State to find out if appropriate taxes were paid.” If this moves towards approved legal action, with witnesses and documents proving the reality of their wealth, Donald Trump, master dealmaker and father-made billionaire, will be needing a bailout, and his father won’t be there to save him this time.