No, Wayfair is Not Trafficking Children in Expensive Storage Cabinets

There is no evidence to support a viral conspiracy theory alleging that Wayfair is part of a human trafficking operation, Reuters reports.

The conspiracy theory appears to have begun on the r/conspiracy subreddit earlier this month.

Users questioned why some storage cabinets, which had “all female names” (some of which matching the names of women and girls who have gone missing) that had been priced between $10,000 and $15,000.

“These claims are false and fueled by conspiracy theories,” Reuters reported. 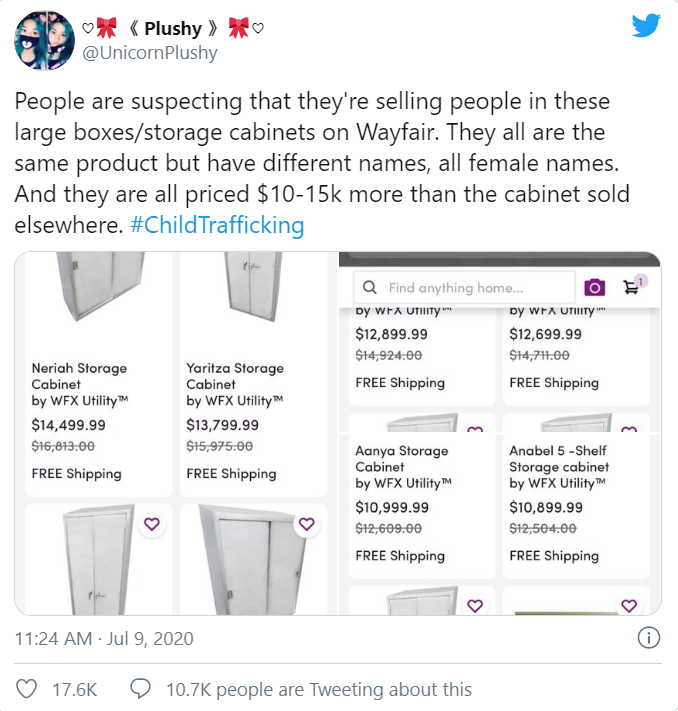 Some “missing” women are not:

One viral post suggested a cabinet with the name “Samiyah” was linked to a missing teenager named Samiya Mumin.

“On Facebook, Mumin herself denounced the conspiracy theories for taking attention away from children who are actually missing,” Reuters reported. “Mumin says in her video she never went missing to begin with.”

It is not uncommon for furniture retailers to use human names for items.

A whole bunch of people came up with a conspiracy theory about how a girl named Samiyah was missing and that her name was turning up as a Wayfair cabinet (among tons of other missing kids). Well, here she is on Facebook Live. Silly conspiracy theory. pic.twitter.com/IK6XdMT16P

What’s with the prices?:

Wayfair told the outlet that along with home items it also sells larger items for commercial use.

“The higher pricing reflects the larger sizing for these items as well as the shipping costs associated for items this big (designed for restaurants, industrial plants, etc),” a spokesperson for the company told Reuters.

“There is, of course, no truth to these claims. The products in question are industrial grade cabinets that are accurately priced,” the company said. “Recognizing that the photos and descriptions provided by the supplier did not adequately explain the high price point, we have temporarily removed the products from site to rename them and to provide a more in-depth description and photos that accurately depict the product to clarify the price point.”

One more statement from Wayfair

About pillow prices: "That is a glitch and something we're working to address."

Though there is clearly some work that needs to be done on Wayfair's system to weed out wild price discrepancies, at least for now, this conspiracy theory can be put to bed.