No, Mass Shootings Aren’t Only Committed By Democrats

On Sunday, Devin Patrick Kelley walked into the First Baptist Church in Sutherland Springs, TX, dressed in tactical gear and armed with a Ruger AR-556 assault rifle. Kelley’s rampage came to an end when he was shot by someone who lived near the church; wounded, Kelley fled the scene before eventually taking his own life.

Since we’ve had so many opportunities to practice it, the public response was predictable. First, there were the unfounded claims that the shooter was a member of ISIS or some other Islamic extremist group. When that didn’t stick, there were rumors that it was some sort of race-related payback for Dylann Roof’s rampage at the Mother Emanuel AME Church in Charleston, South Carolina. The rumor mill churned endlessly because that is its purpose; in times of chaos and tragedy, people need to know who to blame.

But while speculation abounded, a second, underlying conversation reared its head yet again: the gun debate. Second Amendment advocates, of course, would rather this debate not take place at all. “Because I want one” was never a great excuse for owning an assault-style rifle to begin with, and every new mass-casualty shooting makes such a justification that much more unpersuasive.

When you get down to brass tacks, there is little reason why the average person needs a gun, and even less reason why the average gun owner needs eight guns — which, according to a Washington Post examination of an ATF study, is the case in America. Now, I’m not here to talk about whether or not the average American needs a gun — unless they hunt, they probably don’t. And if they do hunt, a shotgun or a rifle would achieve the same purpose without the additional feature of being able to kill a whole lot of people at one time.

But the point is not about guns themselves, but about the debate that inevitably pops up when someone uses one in a rampage. In that debate, knowing who to blame is of secondary importance to knowing who — or what — not to blame. If Devin Kelley were Dayyan Khalid; if the parishioners at First Baptist Church were black; if the gun were purchased illegally, gun-rights advocates could breathe a little easier. Any of these possibilities would be sufficient to deflect from the issue.

Unfortunately, Devin Kelley is a white man who shot other white people for no discernible reason beyond a profound mental illness and a desire to kill others, so none of those diversions will fly. So, instead, we see other diversions. Kelley was a member of Antifa; Las Vegas shooter Stephen Paddock was a Bernie Sanders supporter (he was actually reportedly happy with Donald Trump’s presidency); “what about Chicago?!”; Virginia Tech shooter Seung-Hui Cho was a registered Democrat.

Under these conditions, the debate takes a different tone entirely. Rather than discussing the actual issue of whether it’s a good idea for people to have access to a tool whose only practical purpose is to injure, maim or kill, gun-rights advocates try to transform the debate into a political one. Which brings us to the list that circulates, without fail, every time there’s a mass shooting in the news: 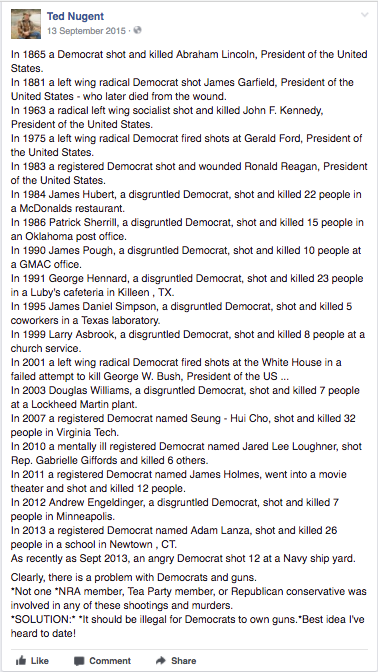 The purpose of this list is to pretend that the issue is really about something else. It’s a favorite among right-wingers, and it’s easy to see why: it has the dual effect of distracting from the debate over guns and painting the left as “The Real Problem.” Unfortunately, like most right-wing memes, it’s mostly bullshit. Let’s take a look at some of the examples cited.

I will readily concede that John Wilkes Booth did indeed assassinate President Lincoln, and that he was a Democrat. However, let’s look at Booth’s reasoning for the assassination, shall we? He was a staunch supporter of the Confederacy, a fierce anti-abolitionist, he blamed Lincoln for all his troubles (including his failed attempt to break into the oil business), and he hated Lincoln’s idea to grant suffrage to former slaves.

In modern parlance, Booth was: a supporter of states’ rights; not a big fan of the idea that all people should be treated equally; wracked by economic anxiety, and consumed by hatred for the government in general and the president in particular. That does sound familiar…but let’s move on.

Pretty much the only thing this entry gets right is that James Garfield was shot. Charles Guiteau, Garfield’s assassin, was a Republican, not a Democrat. Moreover, Guiteau shot Garfield because, according to his testimony, he felt “wronged” that his requests for a job in the Garfield administration had been ignored. Also, he believed God wanted him to kill the president.

An attempt was made on Gerald Ford’s life twice. The first was by Lynette “Squeaky” Fromme, a Charles Manson acolyte who aimed the gun but never managed to fire a shot. The second (which, presumably, is the person to whom this list is referring) was Sara Jane Moore. Moore was only loosely affiliated with Leftist groups (not Democrats, as the list implies).

John Hinckley, Jr.’s parents were registered Republicans; to be fair, the political affiliations of the parents are not necessarily an indicator of those of the child. That said, Hinckley — a schizophrenic — attempted to kill Reagan because of his obsession with actress Jodie Foster after having seen her appear in the movie Taxi Driver. Moreover, there is no evidence to suggest that Hinckley was a registered Democrat.

In 2001, Robert Pickett fired one shot at the White House in a bid to commit suicide-by-cop after having been fired from his job at the IRS twelve years prior. (His suicide note was addressed to the Commissioner of Internal Revenue.) There is no evidence to substantiate the claim that Pickett was a Democrat.

This list is correct that Cho killed 32 people during a shooting spree at Virginia Tech in 2007; otherwise, it’s completely fabricated. Cho was a U.S. permanent resident, and Virginia does not allow permanent residents to vote or even register to vote. On top of that, Virginia does not have partisan registration, meaning individuals cannot register as a member of a specific party. So even if Cho could register to vote (which, again, he could not), he wouldn’t have been able to do so as a Democrat.

Loughner was a registered Independent; moreover, Gabrielle Giffords was a Democratic Congresswoman.

James Holmes, who committed the massacre in a movie theater in Aurora, Colorado, was not a registered Democrat. This one appears to have originated with Breitbart News; however, it was debunked, and Breitbart later retracted their claim.

Of the names on this list, only one is confirmed and accurate (Lee Harvey Oswald); another (Aaron Alexis, the shooter at the Navy shipyard in 2013) was described by a friend as being supportive of the Obama administration, though he was not registered as a Democrat. There is no evidence whatsoever of the political leanings of the remaining names on the list (James Hubert, Patrick Sherrill, James Pough, George Hennard, James Daniel Simpson, Larry Ashbrook, Douglas Williams, Andrew Engeldinger, and Adam Lanza) — they could just as easily be on a list of right-wing mass shooters.

It’s also worth pointing out that a previous version of this list included “juveniles from Democrat families” Eric Harris and Dylan Klebold, the perpetrators of the Columbine massacre (which, as of Sunday, is no longer in the top 10 deadliest mass shootings in U.S. history.) Of course, Harris and Klebold were ineligible to vote, and if the parents’ political affiliation is sufficient evidence, then this list would have to exclude John Hinckley Jr. for that very reason.

Even though the overwhelming majority of entries on this list are inaccurate, unsubstantiated, or outright lies, the list itself is beside the point. Of course, that’s the point: this list is meant to deflect from the issue at hand. If this list doesn’t do the trick, gun-rights advocates will throw up another smokescreen to avoid having this discussion. And on and on it will go, until it’s faded from memory or until the next mass shooting takes place. Arguing about the external factors that may or may not have contributed to this massacre (or any massacre) is a waste of time, because frankly, the motives and political leanings of the shooters are beside the point.

The point is twenty-six people — including an 18-month-old baby — are dead because of a man with a gun, and it is long past time for us to reevaluate the place firearms should have in our society. Ignoring this discussion isn’t just an insult to the memories of those lost; it is a guarantee that more innocent people will be joining them soon.