We’ve all heard the common sense line that “correlation does not imply causation.” If you fall asleep as the sun goes down, that doesn’t mean that you caused that sundown. The same principle applies to the Republican narratives blaming the opioid crisis on the Medicaid expansion funded by the 2010 Affordable Care Act.

In September, The New York Times reported that Sen. Ron Johnson (R-WI) was leading an investigation into the cause of the drug epidemic ravaging parts of the U.S. Their months-long process led the Senate Homeland Security and Governmental Affairs Committee to release a report and conduct ensuing hearings concluding that it was the public health insurance program for that was to blame.

New findings suggest this couldn’t be further from the truth.

A new report from Vox attempts to debunk the Republican narrative that it was Obamacare — through its incentivizing of states to expand Medicaid to “include everyone at or below 138 percent of the federal poverty level (around $16,750 a year for an individual)” — that made access to gateway opioid painkillers significantly worse.

Republicans say Medicaid expansion has fueled these addictive vices and their subsequent sale on the black market, and that this behavior is effectively being subsidized by the United States government. It’d sound like something lifted from the front page of InfoWars… if even they didn’t slightly debunk it back in August 2017. No, instead you’ll find these claims being pushed by not only red members of the Senate but their so-called credible voices like The Daily Wire, Fox News, and Louder With Crowder.

Consider that a new study published in JAMA Network Open put this conservative narrative to the test, and it failed. It failed so miserably, in fact, that the results showed Medicaid expansion “may help combat the opioid crisis by expanding or maintaining access to addiction treatment.” The same kind of treatment programs, which the study found Medicaid, “crucial” for treating the opioid epidemic, that even InfoWars columnist Julie Fidler admitted would have been “drastically cut” under Trump’s failed campaign to “repeal and replace” Obamacare back in 2017.

In his report, researcher Brendan Saloner and his colleagues at the Johns Hopkins Bloomberg School of Public Health and the Substance Abuse and Mental Health Services Administration examined the prescription refilling trends of painkillers across three states that expanded Medicaid versus two that didn’t. This was possibly to give Medicaid-sceptics less room to cry bias and emphasize the effects of the government policy, though that’s just an assumption of their approach.

The results, in any case, conclude that the prescription rates between all states were not “significantly changed” whether the state adopted or rejected the government expansion. They also analyzed drugs such as buprenorphine (otherwise brand named as Suboxone), which was described by the outlet as the “gold standard treatment for opioid addiction,” was significantly higher compared to states without the Medicaid expansion. These account for recent trends and didn’t analysis results years during/before the expansion.

“We looked directly at the fills for prescriptions, and we don’t really find evidence that bears out [Johnson’s] story,” Saloner told outlets like Vox and The L.A. Times. “[The research] rebuts the idea that Medicaid expansion was this pathway for a big increase in people filling prescriptions for opioid pain medication, but there was a big increase in people getting addiction treatment where they were prescribed buprenorphine-naloxone.” 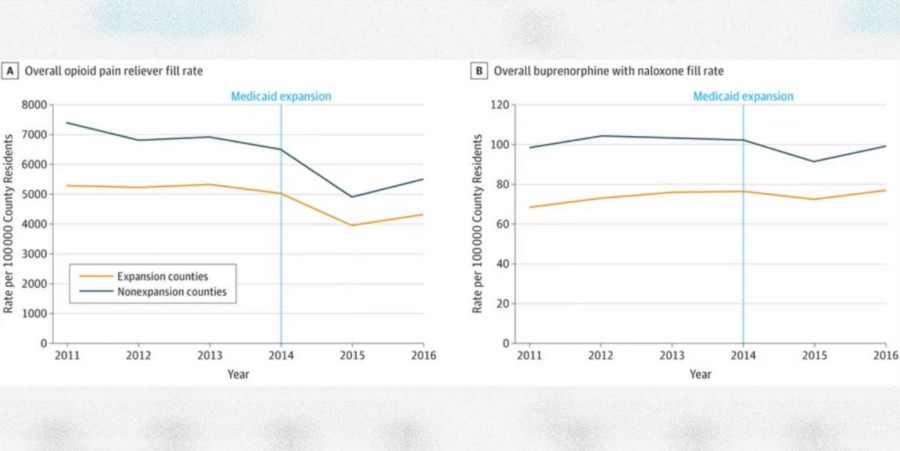 This treatment is only available through a doctor’s prescription and carries the hefty price of nearly $200 per month. Saloner argues that yes, people will pay for their drugs with the government if they have the liberty to do so. He also argues this is a “shift rather than an increase.” Those druggies, who already pay out of pocket or via private insurance, just change their provider.

It’s a similar argument regarding the legalization of most drugs. If you have the ability to take heroin, the people who would do so legally are also the people turning to the black market. Your normal person is less likely to take this action, especially when opioids have a less appealing face in the public eye compared to a more enticing, safer product like cannabis.

They’re supported by other studies, such as Health Affairs Organization, which recently produced similar findings arguing that Obamacare, alongside its Medicaid expansion “may have prompted state Medicaid programs to expand addiction treatment benefits and reduce utilization controls in alternative benefit plans.”

It’s a sad state of affairs when the fringe conspiracy blogs, known for their pushing of the #Pizzagate story and whether Sandy Hook was a hoax, are closer to the truth on this topic than those in mainstream conservative politics. Medicaid is no perfect angel that can do no wrong. Remember that it’s still the American healthcare system where medical bankruptcy is a reality and drugs are overpriced compared to just about everywhere else. But it’s a step in the right direction for cure to the crisis.

“There’s [always] room for improvement,” Saloner cautioned Vox journalist German Lopez. “There’s pockets of innovation happening. We’re nowhere near a full-scale national model for how to do this effectively.”