A set of New York Times/Siena College polls released on Monday show that President Donald Trump still has an Electoral College advantage heading into 2020 even though polls show him losing the popular vote by historic margins.

The polls show that former Vice President Joe Biden is the only candidate that leads Trump in the key battleground states that Hillary Clinton lost in 2016.

Biden leads Trump by 3 points in Pennsylvania, 3 points in Wisconsin, 2 points in Florida, and 5 points in Arizona among registered voters. The two are tied in Michigan. Among likely voters, Biden has a slim lead over Trump in all five states.

While Biden remains the frontrunner, Massachusetts Sen. Elizabeth Warren is within striking distance nationally and leads him along with Vermont Sen. Bernie Sanders in Iowa and New Hampshire. Both candidates poll considerably worse than Biden.

Sanders only leads Trump in Michigan among likely voters while Warren does not lead Trump in any of the battleground states.

“The Times/Siena results and other data suggest that the president’s advantage in the Electoral College relative to the nation as a whole remains intact or has even grown since 2016,” wrote New York Times poll guru Nate Cohn, “raising the possibility that the Republicans could — for the third time in the past six elections — win the presidency while losing the popular vote.”

NYT/Sienna poll: Trump would lose almost every swing state to Biden, but would sweep Warren and take almost all against Sanders.

Trump has massive lead among white voters without a college degree:

Though Trump is historically unpopular nationally, he has maintained his strong advantage among white voters without a college degree. Trump leads all three top Democrats by at least 24 points among that group.

“In contrast to recent national surveys, the Times/Siena polls find that the president’s lead among white, working-class voters nearly matches his decisive advantage from 2016. This group represents nearly half of registered voters in these states, and a majority in the Northern battlegrounds that decided the last election,” The Times reported. “All the leading Democratic candidates trail in the precincts or counties that voted for Barack Obama and then flipped to Mr. Trump… Nearly two-thirds of the Trump voters who said they voted for Democratic congressional candidates in 2018 say that they’ll back the president against all three named opponents.” 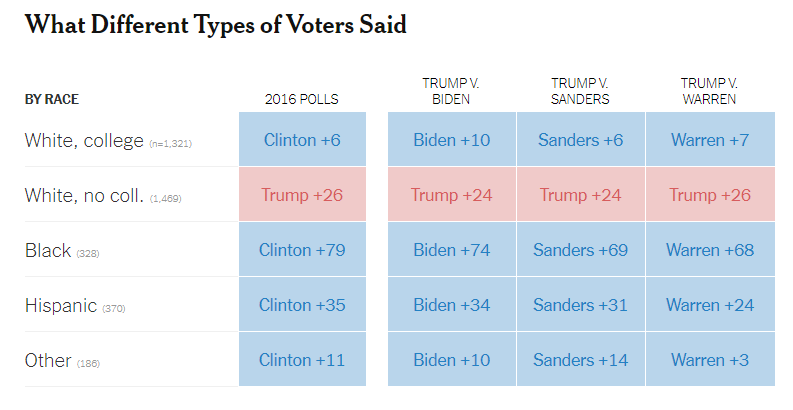