Guantanamo Bay, the controversial detention facility known for holding prisoners indefinitely, is back in business and ready to take new inmates, officials from The Pentagon announced last week — just when a new bipartisan bill could grant President Donald Trump sweeping authority over who to send there and for how long.

According to a report from The Intercept, a new Authorization to Use Military Force (AUMF), granting the president more authoritarian powers, is being pushed through Congress by six lawmakers — including prominent #Resistance figures like Republican Sen. Bob Corker (R-TN) and Sen. Tim Kaine (D-VA), the vice presidential pick for Hillary Clinton in 2016.

Under former president Barack Obama, the condemned National Defense Authorization Act of 2012 (NDAA) allowed the executive branch to hold anyone, including U.S. citizens, indefinitely only if they were involved with the 9/11 attacks or who “substantially supported al-Qaeda, the Taliban, or associated forces.” Rightfully, the right-wing’s Rep. Ron Paul (R-TX) and the left’s Sen. Bernie Sanders (I-VT) opposed these measures. This new bill would essentially remove even the weak protections of the NDAA, creating a potentially broader scope for the use of these detention powers. That is far from how the bill is being sold, however.

Kaine told CNN “for too long, Congress has given presidents a blank check. We’ve let the 9/11 and Iraq War authorizations get stretched. … Our proposal finally repeals those authorizations and makes Congress do its job by weighing in on where, when, and with who we are at war.”

Since former President George W. Bush, the 2001 AUMF resolution has given the president quite expansive powers over who can be detained during wartime. As evidence, Schwartz points to the case of José Padilla, the Brooklyn-born U.S. citizen that was arrested at Chicago’s O’Hare Airport in May 2002 on these orders shortly after his trip to the middle east.

The Bush administration declared the man to be an “enemy combatant… closely associated with Al Qaeda,” placing him in a military prison without the due process. The 2001 legislation made clear who the targeted groups were and said they had to be linked to the 2001 attacks on the World Trade Centre.

The Kaine-Corker bill, however, goes past this standard for declaring the use of force. Under Sec. 10 the AUMF would read: 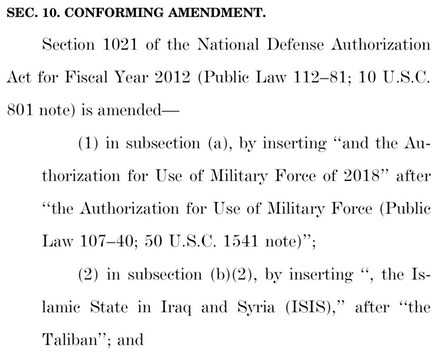 According to the Intercept, here’s why this matters:

“…the Corker-Kaine AUMF allows the president to decide that he has the power to use force against any “organization, person, or force” essentially at will, by designating them as associated with previously named enemy groups.

Then when the bill is passed, the president is invited to designate additional “associated forces” to the list. And going forward, the president can add more at any time. All he needs to do is inform “the appropriate congressional committees and leadership” that he’s doing so.”

So not only does this bill codify existing groups to whom these executive powers apply, it seems to put the discretion for adding to that list squarely in the hands of the president.

“This policy rips the lid open for refilling Guantanamo,” Vince Warren, executive for the Center for Constitutional Rights, told The Daily Beast earlier last week. “It has the same generalized deformities that previous policies have, leaving it to people on the ground to make determinations about dangerousness that will follow through another generation of detainees to fight the same legal battles as the previous generation.”