Native American disenfranchisement isn’t just a dark figment of the past, but a legal precedent that was just upheld by the courts. In a new report published by The New York Times, it was revealed a federal judge for the District Court of North Dakota rejected a last-ditch effort from the Spirit Lake Sioux tribe to prevent the state from installing restrictive voter ID requirements ahead of the 2018 mid-term elections this November.

The new law would require voters to have a residential address to be eligible to vote, leaving the tribe without their rights due to their way of life through reservation status. In his new two-page order, Judge Daniel Hovland, a judicial appointee from the era of President George W. Bush, wrote that his decision was based on the fact that it was “simply too close to Election Day” to make any decision on these potential voter restrictions, arguing the “federal courts are unanimous in their judgment that it is highly important to preserve the status quo when elections are fast approaching.”

Judge Hovland doesn’t appear unsympathetic to the tribes’ arguments. The Times listed an example where he blocked ID laws by ruling it “unconstitutionally discriminated against Native Americans,” though this was reportedly reversed by the Eighth Circuit Court of Appeals months later. Their decision was based on the rationale that the opponents “had not identified any instance in which a North Dakotan was actually disenfranchised as a result of the requirement,” essentially giving the plaintiffs the middle finger in saying nothing can be done until the election cycle rolls around and they’re predictably denied their vote.“The courthouse doors will remain open” when that day comes, they write, inviting a lawsuit if their prediction proves true.

The lawsuit was brought forth by both the Campaign Legal Center (CLC) and the Native American Rights Fund (NARF) who argued, on behalf of the tribe, these new ID law reforms are not only a change to the status quo, but an example of how the government is creating “mass confusion and bureaucratic obstacles” to allowing Native Americans their fundamental right to vote. North Dakota officials argue potential voters can obtain a residential address by giving their county’s 911 coordinator information, though this is speculative.

The lawsuit argues when applied, this information was deemed invalid when certain individuals tried to obtain an absentee ballot. The report even mentions Barbara Hettich, an auditor for North Dakota ballots, who told longtime tribal activist Phyllis Young these laws were so strict that she “had to use blue ink or the ballot would not be counted,” meanwhile the secretary of state’s website reportedly said “ballots must be filled out in black ink.” Shouldn’t a vote be a vote regardless of the damn color used?

Danielle Lang, the senior attorney with the CLC, told The Associated Press these state policies should “make it easier for all citizens to vote” and that these new ID laws “disenfranchises Native Americans” living on these reservations. “We have a choice between a democracy that includes all eligible voters and a system that excludes people based on their circumstances or backgrounds,” Lang added. “Unless the court steps in, eligible Native American voters including our clients may be denied the right to vote next week due to the state’s deeply flawed system of assigning and verifying voters’ residential addresses.”

It’s not controversial to say these laws are the result of partisan politics, as North Dakota’s Republican-controlled state legislature were the ones that introduced the law. The Times reports these were originally conceptualized just a few months after the more neoliberal Sen. Heidi Heitkamp (D-ND) won her race in 2012 with reportedly strong support among Native Americans. The Senate campaign was decided by less than 3,000 votes,while the population of Native Americans is around 40,000, according to the U.S. census. This provides an incentive for the Republicans to help out Heitkamp’s opponent, the Tea Party’s Rep. Kevin Cramer (R-ND), by cutting out the potential grassroots opposition to his agenda. Talk about voter fraud.

Ironically, this could spawn a larger voter turnout as a backlash. “I’m past the point of being upset over it,” Lonna Jackson-Street, secretary and treasurer of the Spirit Lake Tribe, told the Times. “I’m more excited about the outcome, because I think we’re going to bring in numbers that we’ve never seen before.” While these are optimistic words, Heitkamp’s bureaucratic future looks grim.

Polls from RealClearPolitics show Cramer is ahead by more than 12 points, far outside the margin of error, meaning the centrist would need to turn up the populism she hasn’t demonstrated in the past to rally support. Republicans believe she would have to turn to voter fraud tactics to secure a victory, which is a myth used to justify these new voter ID laws despite a lack of evidence confirming this narrative.

As reported by Vox, Loyola Law School professor Justin Levitt said he found a total of 35 credible cases of in-person voter fraud between 2000 and 2014, constituting a few hundred ballots at most, meanwhile his research found more than 800 million ballots have been cast over that same period across all elections. 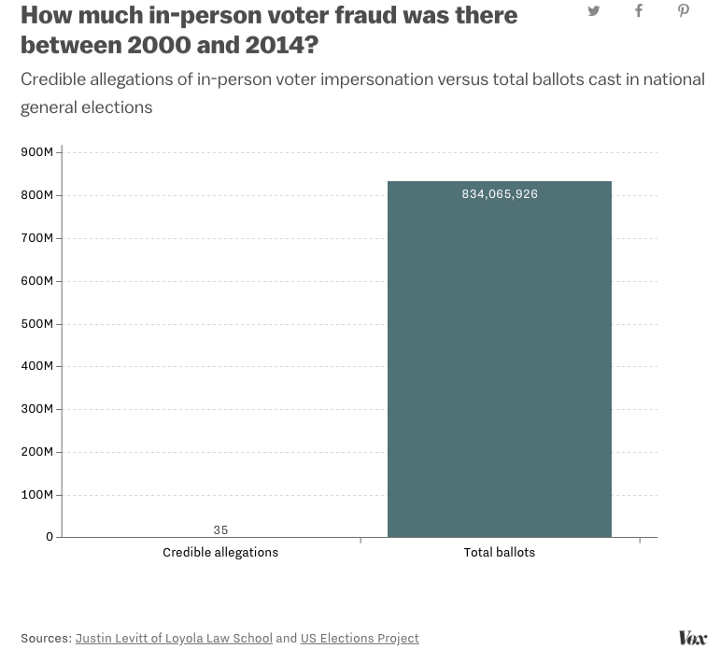 In August, CNN reported that Trump’s now-disbanded voter commission reached similar conclusions. “I have reviewed the Commission documents made available to me and they do not contain evidence of widespread voter fraud,” Maine’s Democratic secretary of state, Matthew Dunlap, wrote in a public letter to Vice President Mike Pence.

Voters do, however, see voter suppression as the bigger issue.

The strongest cast for election fraud was presented by News21, which found in their 2012 investigation that in total, there were just 10 credible cases of voter fraud and 2,068 alleged election fraud cases from 2000, covering over 620 million votes across national general elections. Vox estimates that 0.000003 alleged cases of fraud for every vote cast and 344 fraud cases per national general election. “The number of fraudulent votes was a drop in the bucket,” wrote journalist German Lopez.

This hasn’t stopped conservative states from practicing their localized tyranny when it comes to elections. According to the Brennan Center for Justice, 24 states, predominantly controlled by Republicans, have enacted new voting restrictions since 2010. They write that “13 states have more restrictive voter ID laws in place (and six states have strict photo ID requirements), 11 have laws making it harder for citizens to register, seven cut back on early voting opportunities, and three made it harder to restore voting rights for people with past criminal convictions.”

Thankfully the public notices these behaviours. Last week, The Pew Research Center also published a survey which questioned likely voters on which issue was considered more concerning. In each case, the majority of Democrats and leftists came down on the side of liberty by saying more votes, even in cases of potential fraud, is a preferred evil to disenfranchising legitimate votes through unnecessary, intentional bureaucracy. Unsurprisingly, Republicans and conservatives sided with the government crackdowns on illegal votes. The majority overall sided with the left. 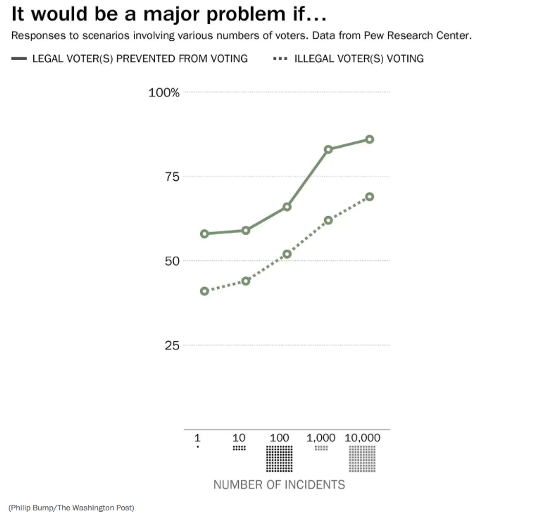 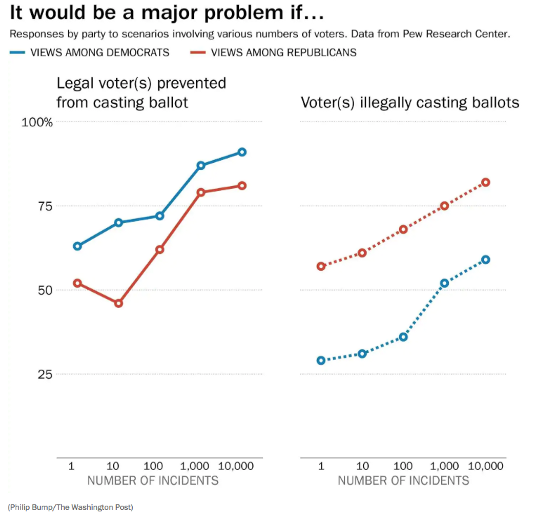 Doesn’t this dispel the idea that conservatives and their major party believe in liberty in principle? Just one illegal vote is a considerable problem compared to ripping the liberty away from the country’s original populace, who have to go to great lengths to maintain their fundamental rights.

“What people out there don’t understand is how much it costs a tribe to make sure that each and every individual tribal member has that right to vote,” said OJ Semans, co-executive director of Four Directions, a Native American voting rights group working with tribal leaders. “The tribes have invested thousands of dollars, whether it’s equipment, man-hours, meetings. This has not come cheap.”