These contentious political times can be very confusing. Apparently, even elected members of the Democratic party do not know where the line in the sand is drawn when it comes to acceptable criticism of the president.

Maxine Waters routinely states, into hot microphones, that she does not respect or trust the president, and that in her view his impeachment should have been fulfilled months ago. She has even come up with a catchy chant that the left can get behind, “Impeach 45.”

Waters, who has made a habit of verbalizing the widely-held beliefs that Democrats simply won’t admit to harboring, has to be wondering where exactly the party stands when it comes to blasting the president. “Are we all in, or not?”, Waters must be asking.

If Waters is looking for somebody to take up her cause of shameless Trump-bashing, and to advance that cause even further, she has an ally in Missouri State Senator Maria Chappelle-Nadal. Consider the Ferguson riots which divided the state, the ensuing hail of controversy that engulfed Missouri’s largest state university, and the university administration’s ultimate capitulation to radical political correctness as a backdrop for Missouri’s current iteration of race politics.

What is acceptable decorum in Missouri may not pass as such on the national level. Chappelle-Nadal once re-Tweeted that “ignorant cracker cops,” not rioting protesters smashing windows, looting, and lighting property on fire, were to blame for Missouri’s poor national image. For that bold statement she received no rebuke, and many in her community likely saw it as evidence of her being down with their cause.

Yet, even for somebody as historically brash and divisive as Chappelle-Nadal, her admission via a Facebook comment, “I hope Trump is assassinated!”, seemed out of bounds. Chappelle-Nadal is the representative of a district in St. Louis County which encompasses Ferguson, and preaching to the mostly poor, staunchly Democratic constituents in her district has clearly resulted in some very loose lips.

So, it should not be surprising that Chappelle-Nadal's open rebellion against the American president has reached the point of publicly wishing for his murder. Her inflammatory public comments, often via Twitter, have steadily escalated in their extremity, while her party members have presumably looked the other way. In many districts, particularly those inhabited by a majority-black constituency, stoking the fire of racial division is a means to maintaining power. The party is all for it, so long as it does not bring any national scrutiny.

When Chappelle-Nadal Tweeted this, not a word of rebuke was uttered from the left: 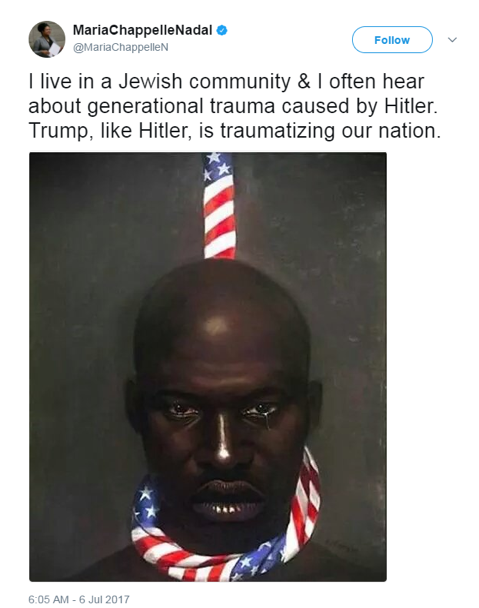 When Chappelle-Nadal threatened repercussions for those exercising their ‘white privilege,' conversations about the fitness of a legislator who doles out intimidation along racial lines were not seriously had by Democratic leadership:

Again, higher-ranking leaders than Chappelle-Nadal have essentially been handed lifetime appointments by their black constituents, whose neighborhoods continue to typify urban squalor. The likes of Maxine Waters and Charlie Rangel employ race baiting as the crux of their political platforms with impunity from their party. For Democrats, it is a means to a vote-getting end.

Doublespeak regarding the Democrat Party’s official stance on race-baiting, including generalizing the president and his supporters as racists, can be understandably confusing. Chappelle-Nadal probably thought her Tweet advocating assassination would carry no ramifications. After all, none of her previous anti-white, anti-Trump tweets had drawn criticism from her party.

Her quick deletion of the Facebook comment suggested that she knew it was wrong, or perhaps that the Democrats have a vigilant social media PR team who got to Chapelle-Nadal quickly. At first, Chappelle-Nadal refused to apologize at all:

“Senator Chappelle-Nadal said she hopes the President is killed. Republicans and Democrats have called on her to resign. Her response: ‘Hell no.’ Last night, in an interview, she refused to apologize — twice. If she will not resign, the Senate can vote to remove her. I believe they should,” said Missouri governor Eric Greitens.

Further critical coverage of the comment led to Chappelle-Nadal's issuance of a Democratic staple, the qualified apology:

“The way I responded this morning was wrong,” she told The Star. “I’m frustrated. Did I mean the statement? No. Am I frustrated? Absolutely. The president is causing damage. He’s causing hate,” Chappelle-Nadal said.

Her immediate reaction– refusing to apologize– shows the insincerity of subsequent ‘apologies,' which in some cases are being described as ‘tearful’ and ‘emotional.' Right…

Even if President Trump is causing hate, an assertion many consider laughable, Chappelle-Nadal could have caused an assassination. And the left says that the right is guilty of false equivalency.

Now, the negative attention Chappelle-Nadal has once again brought to the Democratic Party has led to calls for her resignation. While she says she feels badly, the state senator is not ready to step down. She is fighting for her political life. Even the Democrats, who have largely maintained only a nod-and-wink approach to condoning anti-right violence and the suppression of free speech, know that a party member’s on-record call for a coup cannot be overcome.

In the service of arguments that the Democratic Party has become the party of extremism, critics will be able to point to a professed assassination advocate on the party payroll. So, it is likely that Chappelle-Nadal will soon be toast.

However, it must not be ignored that the state senator’s steady rhetorical escalation, long uncontested by party leadership, led to this point. Such escalations, and similarly incendiary, divisive rhetoric espoused by Democratic leadership at all levels, continue to occur. Yet, it is only when a leader is dumb enough to take the ‘assassination’ leap on public record that rebukes from the party of the left arise.

The message is clear: It’s OK to be racist, OK to hope for the president’s violent demise as a Democratic politician. So long as you don’t say it on the record.