Millennials: An Entire Generation That Sucks?

Full disclosure: I'm a millennial. At least, according to the strictest of definitions I am. But being born in 1984 makes me one of the older millennials that walk the earth and perhaps, based on the conditions of my upbringing, makes me more like a Gen Xer.

That being said I'm fully aware of the irony of criticizing an entire generation of people. Growing up I watched this happen time and again. As one group of people come into early adulthood, exercising their rights and exploring their identity, the older generations (and there are numerous, overlapping ones, here) begin crafting the ammunition to keep them down.

I heard this was very common in the 1950's, when all those greasers and beatniks started showing up in coffee houses and diners. The old folks didn't like their weird lingo and looked for ways to marginalize, denigrate, and generally discount this group's contribution to society.

Just watching some of the teen exploitation movies of that era is proof enough of this attitude.

But generational hate continued into the 60's. Maybe the old folks were justified this time. The empty-headed flower children were deliberately trying to eschew the traditions and customs of their upbringing, in such a way that few older folks could handle it. (There was always that one, really old hippie in the bunch, but we can ignore him.)

It continued into the 90's, when I watched society look at the "Grunge" generation with distrust. By then it seemed, though, that everyone was too tired to do anything about it, especially the Gen Xer's.

Why all the hate? A part of it could be because, as I established above, there is a sick fear of being replaced by those that come after you. While societies only thrive when the older generations teach, equip, and empower their descendants, there seems to be a human quirk that causes parents to occasionally mistrust or even attack their children.

I think it's partly inevitable. Nobody likes getting old. And the prospect of being replaced- on any level- by people who you feel are less smart, talented, or qualified, can be very painful. And let's face it, our modern society is obsessed with youth. Just when someone is reaching an age when they have wisdom and maturity to pass along, they are rejected for someone with smoother skin.

So it stands to reason that, on some level, the older generations' criticism of millennials is justified.

But the particular pop culture obsession with millennials seems more than just the run-of-the-mill generation gap.

I've never seen a generation get blamed for so much, after doing so little.

Yet perhaps all the Baby Boomers, Flower children, and Gen Xer's have a point. Maybe millennials are a bit odd. Maybe all that pre-k crap they've been fed for years really has produced the most anemic, selfish, and pathetic generation since the Flappers.

This is evidenced in the shocking displays of stupidity and entitlement exhibited by current college students and people in their 20's. They seem to lack even the most basic ability to take criticism, deal with other's opinions, or just generally show respect to people other than themselves.

Plus they're super overdramatic.

But millennials' problem with dealing with real life extends to more than just the election. Even in ways that actually affect their personal lives, they cannot deal with the slightest bit of pain or discomfort.

Recently a hiring manager took to LinkedIn to discuss an encounter he had with a young millennial looking for work at his company. Her writing samples weren't up to snuff, so he took the time to give her some constructive criticism, so she could improve her skills for the future.

This is an amazing Glass Door post savaging me as one of the the "rudest and [most] unprofessional hiring managers" a 23 year-old millennial has ever encountered (in her distinguished career): 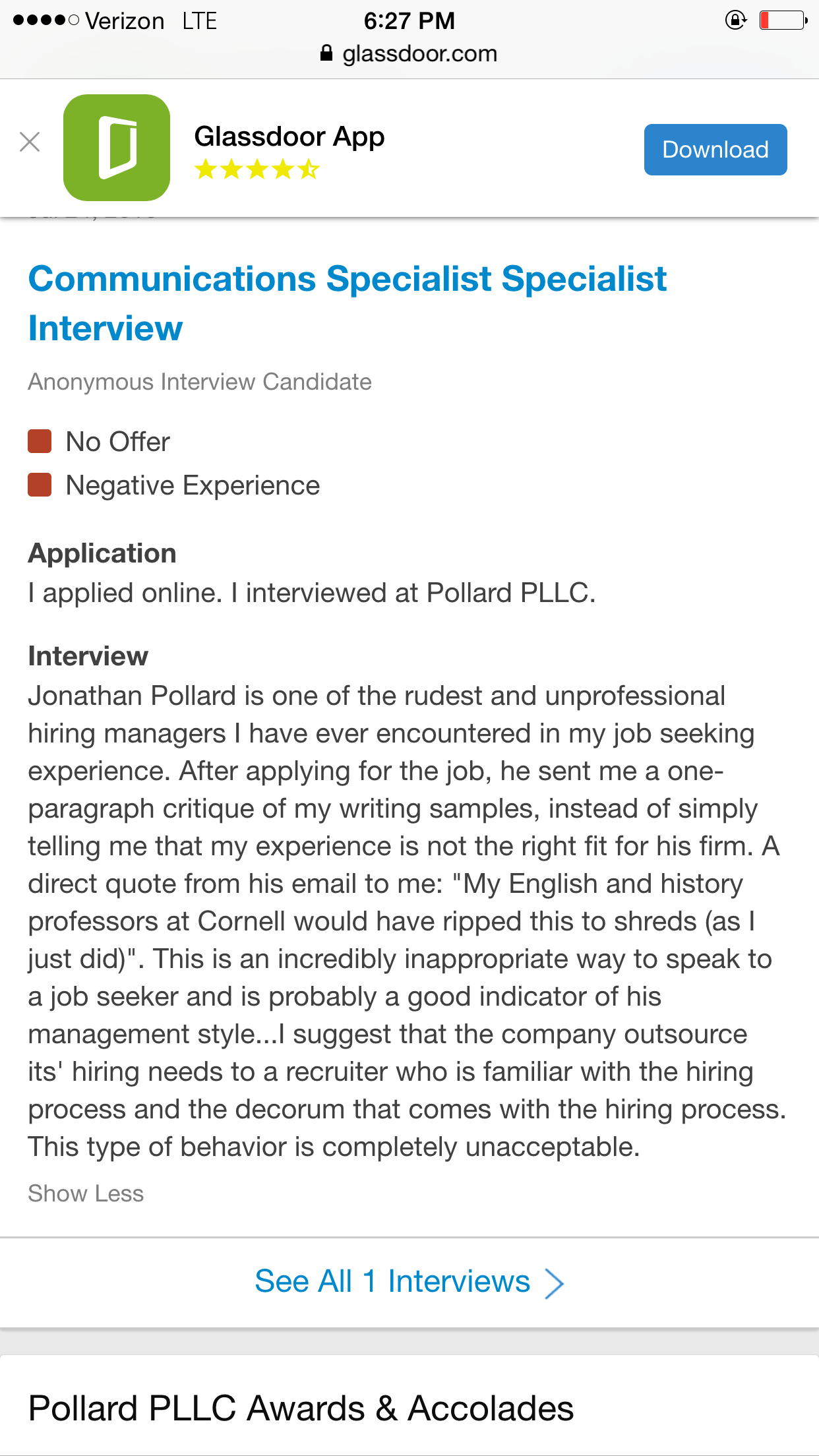 This person sent an application and bragged about her tremendous writing ability, but submitted writing samples that were riddled with problems. So I workshopped some of her writing. Literally, I spent some time editing it, redlining it, making comments on it, the whole nine. I'm not joking. (via LinkedIn)

Mr. Pollard didn't have to take the time to give his person such valuable advice. He could have sent her a polite form letter and moved on with his day. What he did do was provide her with some tips that could help her actually get good work in the future.

Yet this millennial regards Pollard's generous contribution to her future career as "incredibly inappropriate."

Really? Girl, you just got out of college. You haven't spent an iota of time in the real world. Sending writing samples riddled with errors to a prospective employer is not the way to go. Learning right now how to correct that is a big deal.

But this young woman expects everyone to coddle her, perhaps ignore her mistakes and just give her a passing grade.

I can almost see her, clutching her shoulders and screaming after reading his email. Instead, she should have sucked it up, taken his advice, perhaps thanked him, and moved on.

Instead, she writes a nasty review in some twisted attempt at getting back at him.

Pollard goes on to tell a story about his college professor, historian Michael Kammen, who simply gutted his first paper. Did Pollard freak out, complain to the school, demand a changed grade? No, he sought out his teacher to learn how to write better papers. That's how the system used to work.

Real talk: There are many wonderful, hard-working, well-adjusted millennials out there. The best lawyers on my team are all millennials. I love them and would trust them with anything. But don't kid yourself: There has been a dramatic generational shift. I graduated from Cornell in 2004. Back then, college was still a sort of rough and tumble place. You know, people had different ideas and might say stuff that offended you. There weren't trigger warnings and safe spaces. If you got a bad grade, then you got a bad grade.

Incidentally, I graduated college in 2004 too.

A while back I wrote an article on my blog about dealing with problems at work. I had just ended a very toxic work relationship and wanted explore what it takes to have good professional relationship with a company or boss. I learned through difficult working environments (and I've been in a few) that along with positive reinforcement and encouragement, you need plenty of criticism.

Some of the most important people in my life- mentors and teachers- have always been quick to correct me or found ways in which I could improve myself. It's a part of the process of maturing, of becoming a better person and professional.

But it seems that an entire generation is unwilling to undergo this kind of crucible. They don't want to be told anything except that they're great. They don't want to face the reality that they might be wrong, or that there are areas in their life that need improvement.

So who's to blame?

Yeah, colleges get blamed a lot for the way millennials are behaving, but their behavior was ingrained long before they reached the land of safe spaces and trigger warnings.

So the next time you hear someone criticizing millennials, remember: it's a problem that goes back generations.