Palestinian activist Linda Sarsour just can’t stop wondering about her Jewish problems. Attending the curiously named “Anti-Semitism and the Struggle for Justice,” the progressive activist, hailed by left-wing celebrities like Mark Ruffalo to The Democrats’ 2020 front-runner Bernie Sanders, lambasted members of the “Jewish media” for questioning her pro-Islamist statements:

“If what you’re reading all day long, morning and night, in the Jewish media is that Linda Sarsour and Minister Farrakhan are the existential threats to the Jewish community, something really bad is gonna happen and we gonna miss the mark on it.” Failing to clarify what that “really bad” thing to happen is.

The remarks were originally reported by Fox News, then picked up by the conservative Daily Caller and New York Post, who all say the event was already riddled with external controversy. Activists and organizations were allegedly calling out New York’s university, the recently opened New School, for “inviting speakers with links to anti-Semitic radicals.”

Whether they mean radical in the physical or ideological sense, we cannot be sure. However, Sarsour did happen to share a panel with (and defend) the worst choice on Jewish relations, Mr. Louis Farrakhan. 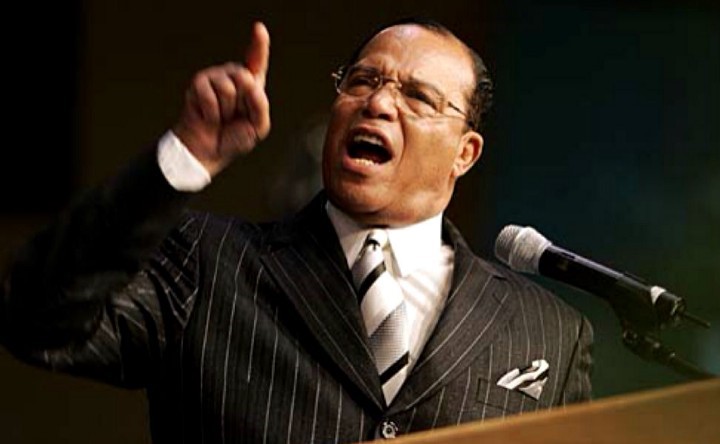 Known as the leader of the Nation of Islam, The New York Times report as late as 1985, the man was known as a repeat public admirer of Nazi Germany’s leader Adolf Hitler, calling him on several occasions, on national television in front of an audience, “a very great man.”

The Anti-Defamation League, in their report “ Farrakhan In His Own Words,” list 30 years of similar behavior, detailing the man’s blame of “the slave trade and that they conspire to control the government, the media, Hollywood, and various Black individuals and organizations” on “the Jewish people.”

Sarsour’s conduct, however, has more nuance than the far left and right want to admit. Recently she’s gotten into trouble for calling for “jihad” against the Trump administration, later crying in the op-ed section of the Washington Post that she’s the victim of “Islamophobia.”

One of her critics, Lalo Dagach, a former Muslim turned Atheist and host of the political Lalo Dagach Podcast, archived several of Sarsour’s tweets on Facebook, taking screenshots before they were purged from page shortly after her Women’s March last January.

Among these tweets is her notable hatred for Ayaan Hirsi Ali, an ex-Muslim turned Islam critic, who suffered Somalia’s female genital multination (FGM), saying quote “I wish I could take their vaginas away — they don’t deserve to be women": 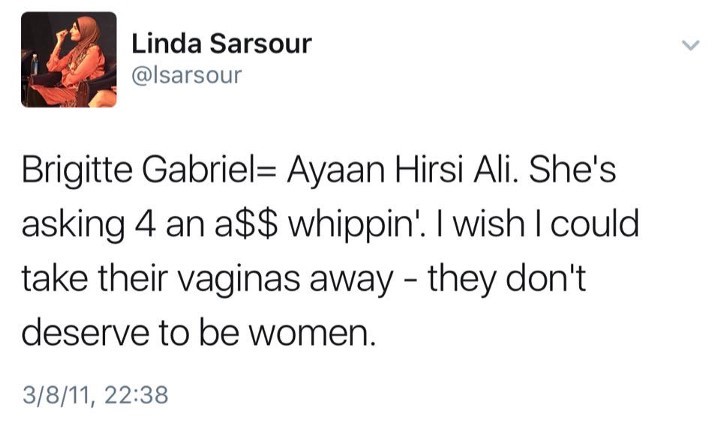 In a tweet that still remains, Sarsour once again endorsed Farrakhan’s organization, considering the above listed prior history, as a pivotal role in Islamic teaching:

Can't learn or teach about the history of Islam in America without talking about the Nation of Islam (NOI). #MYLS2014

But so far these are just examples of words. What has Sarsour actually DONE, you may ask?

Well, in late February 2017, the activist pledged (and succeeded) in raising $100,000 to replace this vandalized Jewish cemetery in New York: 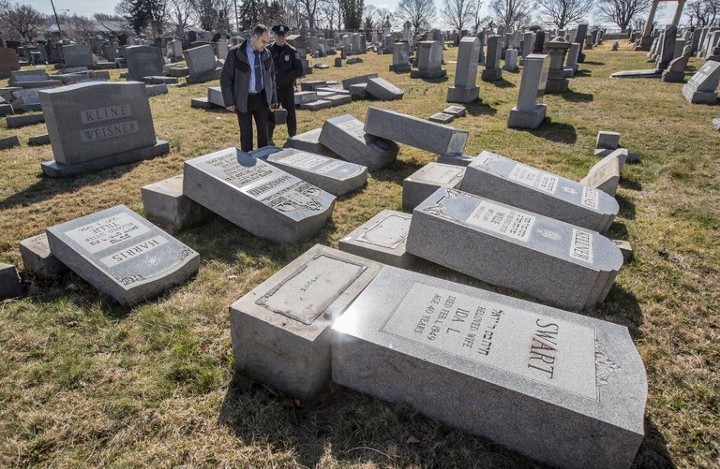 A very selfless gesture, her critics must admit, but they had one question: 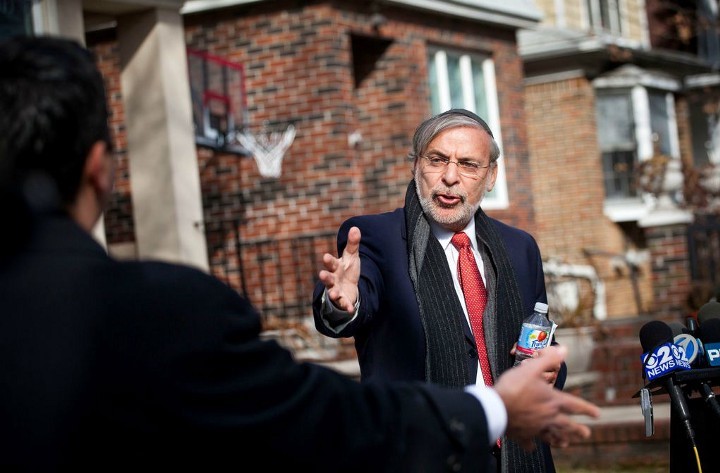 In March, Jewish New York Assemblyman Dov Hikind responded to an article asking as much from The Algemeiner, who said the city didn’t get anything:

“Sarsour is a fraud,” said the Assemblyman. “She talks out of both sides of her mouth. One minute she’s claiming to be a disciple of the great Dr. Martin Luther King Jr., and the next she’s standing with a terrorist on stage at an event [Rasmea Odeh], and singing praises of that terrorist to an audience. I won’t be the least bit surprised to hear that her little Jewish cemetery publicity stunt wasn’t quite what she made it out to be.

I understood that Sarsour’s fundraiser was just a publicity stunt meant to mask her efforts to hurt the State of Israel while glorifying her terrorist pals in various Tweets and speeches,” said Hikind. “But I also hoped that the money she raised would at least help these cemeteries. After all, Sarsour has no loss of affection for dead Jews. But this new report raises questions about where the money went. Perhaps if this story gets out, the shame will cause Sarsour to direct the funds to the people it was promised to. Then again, shame implies an elevated sense of self-awareness, and someone who glorifies terrorists is rarely sullied by a scruple.”

Sarsour, of course, denied these claims, threatening the publication with a potential defamation lawsuit:

.@Algemeiner is just begging for a defamation lawsuit. This is not the first time I had to answer outlandish claims. https://t.co/MW9iHlMdgE

.@Algemeiner thinks they can just post whatever they want without getting the facts straight. Didn't bother asking. This is getting old.

Sarsour later responded on Facebook, blaming “the right, alt-right and zionists” for the scrutiny of her donations and possible hostility to the community.

She then indicated that she was not in control of the funds, but rather it was a third party, who would turn over the money when the cemetery had a “plan”:

“I have the unfortunate receipts of what it costs to be a target of the right wing, alt-right, right wing zionists. This has caused my family great emotional stress & trauma. It’s not free to keep my family safe. I just want people to know I am taking names of media outlets and prominent individuals who have used the last few months to defame my character. I may be quiet but they will pay with their pockets.

Today’s most recent outrageousness is questioning my integrity around the campaign to raise money for Jewish cemeteries. Algemeiner a right wing Zionist media outlet regurgitated a story that I already had responded to a few weeks ago. You can call me what you want BUT DO NOT EVER QUESTION my integrity.

We set out to raise $20K and raised over $100K thanks to generosity of so many people. We ensured that the St. Louis Cemetery (the original focus) received the funds they needed, and we found others who also had incidents of vandalism, etc. The money is being administered by CelebrateMercy, NOT me. There still is money left over and Tarek El-Messidi found a cemetery in Colorado that has been in shambles for years being cared for by a legally blind man. Tarek went and visited them (you can read more in this article) and said that once they had a plan to take on this huge project Tarek would be ready with the funds.

I am exhausted. I am tired of the lies, lies, and more lies. It’s too much and it reignites the most vitriolic human beings on this earth. I am not safe and someone will pay for this with their pockets. Big time.”

So with all things considered, I would say controversial charges and skepticism are warranted towards Miss Sarsour, with ADL CEO Jonathan Greenblatt‏ capturing the situation perfectly: “Having Linda Sarsour & head of JVP leading a panel on #antisemitism is like Oscar Meyer leading a panel on vegetarianism.”

Having Linda Sarsour & head of JVP leading a panel on #antisemitism is like Oscar Meyer leading a panel on vegetarianism. These panelists know the issue, but unfortunately, from perspective of fomenting it rather than fighting it. https://t.co/s4tvBrvjBj 1/2