#LeggingsGate: When Should Dress Codes Apply?

Over the weekend, United Airlines found themselves in the middle of a social media firestorm. A bystander set off an internet mob when she saw a United Airlines employee stop two teenage girls dressed in leggings from boarding a flight.

The problem is, most of the anger came before full details of the situation were revealed. It turns out that the girls were flying standby on their flight from Denver to Minneapolis using free passes for employees or family members. Individuals using those passes are considered airline representatives, United Air Lines spokesman Jonathan Guerin said, and as such, they are subjected to a dress code that prohibits sleepwear, torn clothing, swimwear and revealing attire. The airline’s dress code dictates that these passengers must be “well-groomed, neat, clean and in good taste.” It is noted that miniskirts, clothing that “reveals a midriff,” short shorts and “form-fitting lycra/spandex tops, pants and dresses”- such as leggings- are banned. Of course, when asked if the rules could be construed as sexist, Guerin replied, “Absolutely not. Male or female, those rules apply to every pass rider.”

United spent much of Sunday and Monday trying to quiet the indignant social media crowd after Shannon Watts, founder of gun safety group Moms Demand Action, posted on Twitter that United gate staff had stopped three girls from boarding the flight to Minneapolis because of their stretchy pants. 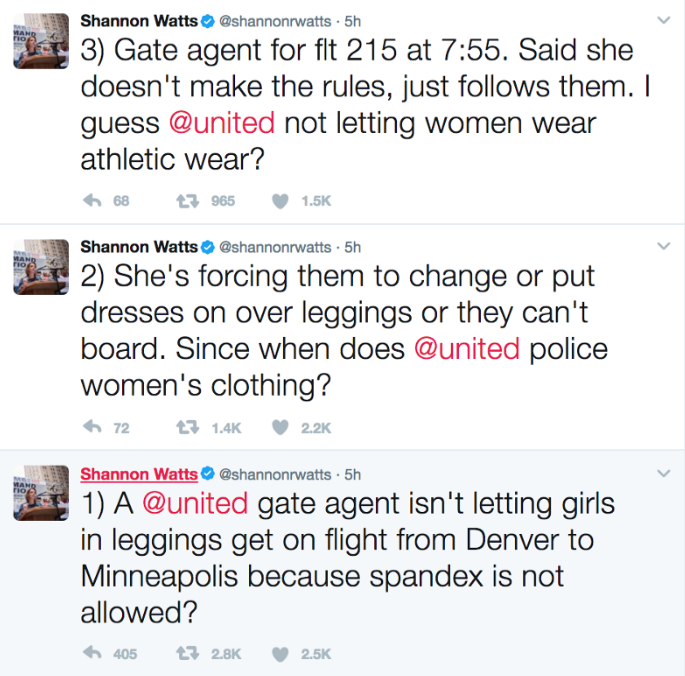 However, Watt’s main cause of outrage was a case of misunderstanding. She thought the third passenger, a 10-year-old girl, was forced to put a dress over her leggings in order to board. 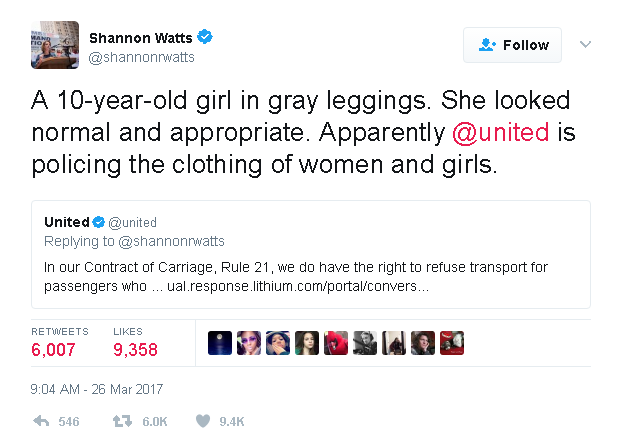 That is a cause for concern. As Actress Patricia Arquette quickly pointed out: “leggings are business attire for 10 year olds. Their business is being children.” But it turns out that the 10-year-old putting a dress on over her outfit was the overreaction of her mother. The mother did not realize that the two teenage girls were pass riders and being held to a different standard when she pulled a Hawaiian dress over her young daughter's activewear clothes. In fact, United has since doubled-down on its statement to try and reassure customers of its acceptance of casual wear.

“Like most companies, we have a dress code that we ask employees and pass riders to follow. The passengers this morning were United pass riders and not in compliance with our dress code for company benefit travel. To our regular customers, your leggings are welcome.”

Well, that’s good to know I suppose. I’m one of the many fans of leggings. I live and breathe the leggings fight.

Truthfully, I never hopped on this particular internet ragestorm though. Very surprising, I know. Unfortunately, that particular United employee was within her rights to enforce their dress code standards. I can’t help but wonder if something transpired before the witness accounts began though, because it seems like a rather small grievance. As someone who has routinely, over the last three years, been wearing leggings to the office in the daytime and yoga pants in her off-hours, I’ve encountered a grand total of four people who have commented on my choice of attire, and all of them were in the same camp as Danny Cevallos from CNN speaking about leggings being lazy-wear (sidenote: hilarious, because he’s clearly never worn leggings in his life). He phrases the beginning of his argument well:

“As a general rule, are leggings improper attire? For shopping at Target, no way. For ten year olds? Generally, no. For anyone -- adult or child -- attending the White House Correspondents' Dinner? It might be inappropriate. It depends. Context matters.”

He should have just stopped there though, instead of going on about how people dress nowadays like they’re going to slumber parties. Agreed, context matters. We should think twice about casual wear when going to the White House, or the Oscars, or the Nobel Prize Awards ceremony. But for most of us, those are not everyday occurrences. That’s what makes them special, and worthy of particular clothing choices. For everyday wear? I don’t see the problem.

The Washington Post ran a whole piece in response to #LeggingsGate about how wearing yoga pants and leggings all the time is an insult and indicative of bad manners. I just don’t understand the huge deal about putting comfort first. I think it’s about time.

Male high performers in the business world already get it. Steve Jobs’ clunky New Balance 991s, Mark Zuckerberg’s hoodie, Elon Musk’s tight black muscle tee; they know a secret women are only just learning—you can code more, write for longer, and think better if your heels aren't killing you and your high-waisted skirt isn't digging into your side. It's telling that the Silicon Valley fashion mantra has become comfort above all else.

So why is United’s dress code so strict? In fact, all airlines have similar dress codes for their pass riders. Understandably, if you’re riding on the company’s dime- as pass riders are either flying for free or at heavily discounted rates- the company is allowed to set whatever rules they see fit. However, dress codes are, by their nature, inherently sexist, as item-specific policies often target women’s clothing. When vague language is used, women are scrutinized more closely. Of course, the United policy looks trite when compared with the much-publicised dress code of the Trump administration. Back in February, it was discovered that Trump wanted his female staffers to “dress like women” and, even if that did involve jeans, the look needed to be “neat and orderly.” This prompted another social media backlash, with Twitter users posting images of female soldiers, surgeons, and astronauts with the hashtag “dresslikeawoman.” After a woman was sent home from her job at the offices of PwC for not wearing high heels, MPs began calling for tougher action over dress code discrimination. This is 2017 after all, people. Other fights also rumble on. While women have been allowed to wear trousers at the US Senate since 1993, some girls at primary school still have to wear skirts rather than trousers.

All of this sounds ridiculous from a gender equality point of view– but also from a style one. Many dress codes, including United’s, are outdated compared to what women are actually wearing in the real world. Leggings are being worn by celebrities like Gigi and Bella Hadid, and Kendall Jenner, on the street, on dates and– notably– in airports. They are also on the catwalk at Chanel, MaxMara, and Balmain. To think of leggings as merely something to exercise in, and therefore intrinsically unsmart and unprofessional, is old-fashioned– the equivalent of dial-up internet, or MSN messenger.

I think the whole debacle is hilarious, but United set off a much-needed discussion regarding dress codes, and ultimately, policing of women’s clothing. I can’t even remember the last time I wore pants other than leggings, and I know I’m not alone in this world. Ironically, neither is United, as the company itself has even used leggings in their own adverts. 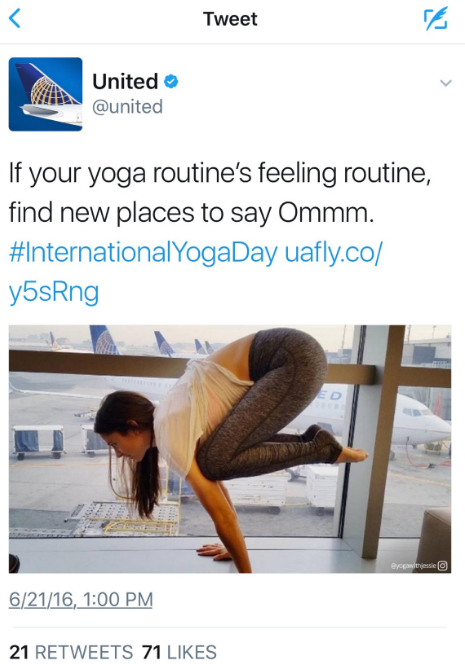 Honestly, I think it just boils down to this: why the hell is wearing leggings and casual clothing such a disgrace and outrage? We have a million and one other problems to tackle, so let’s just do it in comfort.