Penn wrote that four hours after reaching out to the department for comment, Olson resigned.

The article cited a statement from Jake Hyman, a spokesperson for the Anti-Defamation League.

“The post in question is clearly anti-Semitic, and if it does indeed belong to Leif Olson of the U.S. Labor Department, we call on him to apologize and affirm that he no longer harbors such virulently hateful views,” Hyman told the outlet.

After the report went up, Hyman posted on the group’s website that, “We appreciate Mr. Olson’s clarification that he intended to be sarcastic with his posts, and accept his explanation of the content in question.”

The Bloomberg Law story on Leif Olson appears to be crumbling around it. Jake Hyman of the ADL is quoted in the story calling Olson's FB post "clearly anti-Semitic." An ADL spox sends this statement: pic.twitter.com/03o5oFgCRp

These are the posts Bloomberg called “Antisemitic”:

A commenter added, “he’s a neo-con too, you know.”

“No he’s not. Neo-cons are all Upper East Side Zionists who don’t golf on Saturdays if you know what I mean,” Olson replied, again referencing far-right tropes.

“That’s what I meant. He’s a Jew. Everyone knows that,” the commenter wrote.

“It must be true because I’ve never seen the Lamestream Media report it, and you know they protect their own,” Olson replied.

“It was sarcastic criticism of the alt-right’s conspiracy theories and anti-Semitic positions,” Olson told Bloomberg before they published the bogus report anyway. 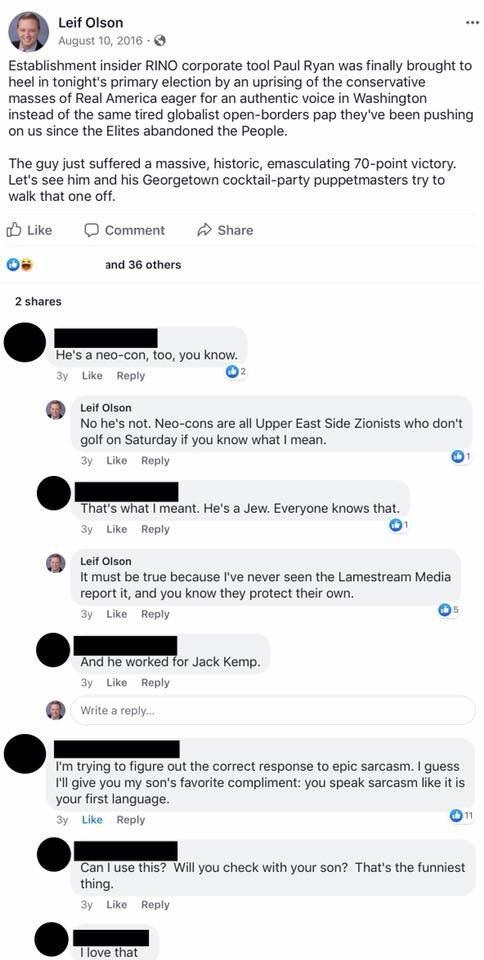 Olson gets his job back:

The Labor Department issued a statement a day after the report was published announcing that Olson was reinstated.

"On Friday, August 30, 2019, Senior Policy Advisor of the Wage and Hour Division, Leif Olson offered his resignation and the Department accepted,” the department said in a statement. “Following a thorough reexamination of the available information and upon reflection, the Department has concluded that Mr. Olson has satisfactorily explained the tone of the content of his sarcastic social media posts and will return to his position in the Wage and Hour Division."

Senior policy adviser Leif Olson will be returning to the Wage and Hour Division, DOL says. He offered his resignation on Friday after a @BLaw report alleged he had made anti-Semitic comments on Facebook. More background in today's @ProMorningShift https://t.co/jJ5JQN5Auo pic.twitter.com/2Y7qAwTZwK