Jared Kushner, President Trump’s beloved son-in-law and senior adviser for the White House, is trying to push through bipartisan legislation to reform the American prison system — leaving Congress divided on the issue.

Since the mid-1970s, criminal justice policy in the United States has focused on the trifecta of social control: incapacitation, punishment, and alienation in law and society that makes integration an impossible reality. This was considered being “tough on crime,” the jingoistic position once desirable among voters who rejected Dukakis Democrats in major elections. Upon years of reflection on the results, with the “land of the free” having 724 people per 100,000 arrested, Americans now call this issue “mass incarceration”.

Coalitions soon emerged among liberty-oriented Republicans and Democrats, taking the form of Sen. Rand Paul (R-KT) and Sen. Bernie Sanders (I-VT), who often condemn the overwhelming costs of locking up over 4 percent of the population, many as the result of the “failed war on drugs.” Even more establishment politicians like Sen. Cory Booker (D-NJ), known for their significant financial ties to the law and pharmaceutical industries, introduced substantive criminal justice reform legislation such as the Marijuana Justice Act and the Reverse Mass Incarceration Act — gaining support among Sanders-like progressives and Booker’s fellow neoliberal giants like Kirsten Gillibrand (D-NY) who co-sponsored the bill.

Kushner’s favored bill, introduced by Rep. Doug Collins (R-Ga.) and Rep. Hakeem Jeffries (D-NY) as the First Step Act, addresses none of the key issues that actually drive up the prison population. Instead, the bill focused on ensuring prisoners get help with societal integration by encouraging vocational training to secure a job, among other rehabilitative programs such as mental health treatment, to be available from behind bars. The bill would require the Bureau of Prisons (BOP), a part of the Justice Department, to do risk assessments on which inmates should qualify and earn “good time credits” that go toward completing their sentences in either halfway houses or home confinement with certain oversights.

The bill passed the House with overwhelming support (360–59).

The Senators are supported by several civil rights groups known for progressive positions on crime, such as the Leadership Conference on Civil and Human Right and the American Civil Liberties Union. According to Vox, these groups sent out their own letter calling on Congressional members to vote against the bill.

Other members of Congress, however, have their minds elsewhere. Politico reports that Sen. Tom Cotton (R-AK), known for blocking other criminal justice reform policy, is trying to build opposition to the legislation because it “goes too far,” according to the emails reviewed by the news publication exclusively. Should this prove to be a legislative milestone for Kushner and company, now with the “tough on crime” president announcing he’ll sign the bill if it reaches his desk, it’s apparent that it won’t enact any major changes to the criminal justice system.

The bill, set to annually invest $50M into rehabilitation efforts, deserves some credit on trying to turn criminals straight upon release — but is the investment worth it when considering the numbers? Remember, Kushner’s plan will only go to help federal prisons, excluding the majority of the prison population held in state, local, and private prisons across the country. Based on reports from the US Bureau of Justice Statistics, an 87 percent majority of prisoners are held in state prisons, mostly held on violent charges.

The same report also found that 47 percent of federal prisoners are in for drug offenses, mostly related to marijuana — which is currently legal across ten other states. The population of federal prisons, in fact, only makes up 200,000 of the 2.1M currently held for incarceration. Including state institutions in the bill would at least improve the likelihood of successful prison releases — even if it doesn’t address the problems with mass incarceration. 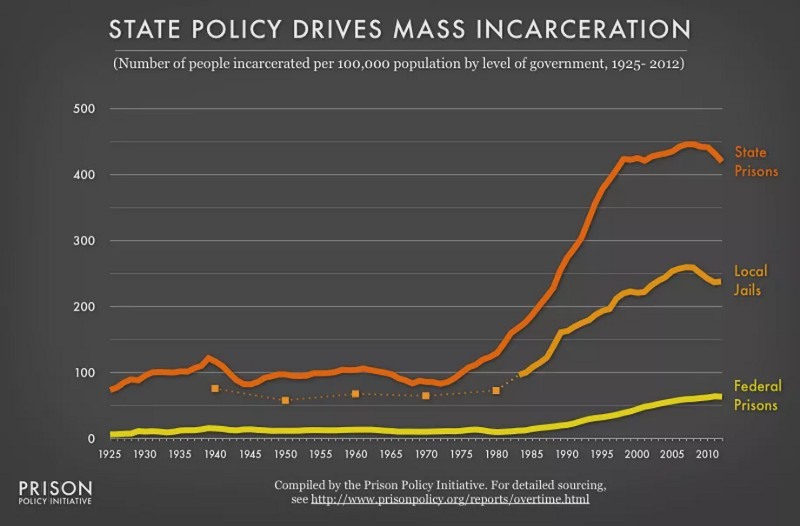 “As America regains its strength, opportunity must be extended to all citizens,” Trump said of prison reform. “That is why this year we will embark on reforming our prisons, to help former inmates who have served their time get a second chance at life.” This statement came without a word mentioned on the removal of voting rights for former criminals, needless prohibition of recreational drugs, or the overcrowding of America’s institutions. With the Senate still very much divided, it is unclear whether even this small reform will make it to the president’s desk.