A new study from the libertarian-minded (and Koch affiliated) Mercatus Center at George Mason University has been making MSM headlines for projecting that “Medicare-For-All” would cost the American people $32.6 trillion over the next decade.

This headline, intended to shock the public, is a concerning figure when presented without all the evidence. If you’re drinking partisan media from Fox News to Breitbart, even neutrality-biased media like The Associated Press, perhaps this reality isn’t so evident.

According to a new report from The Intercept, this projection is quite literally “old news.” While it does have the backing of the Republican donor Gods themselves (Charles Koch gives money to, and is on the board of the Mercatus Center), this number is consistent with several centrist projections which spawned during the 2016 presidential election cycle and onwards. I would argue this number isn’t even the real news story. What these headlines fail to mention is this crucial update: the study, from former Bush administration economist Charles Blahous, made the argument the Medicare-For-All system would actually reduce current U.S. healthcare spending by $2 trillion. 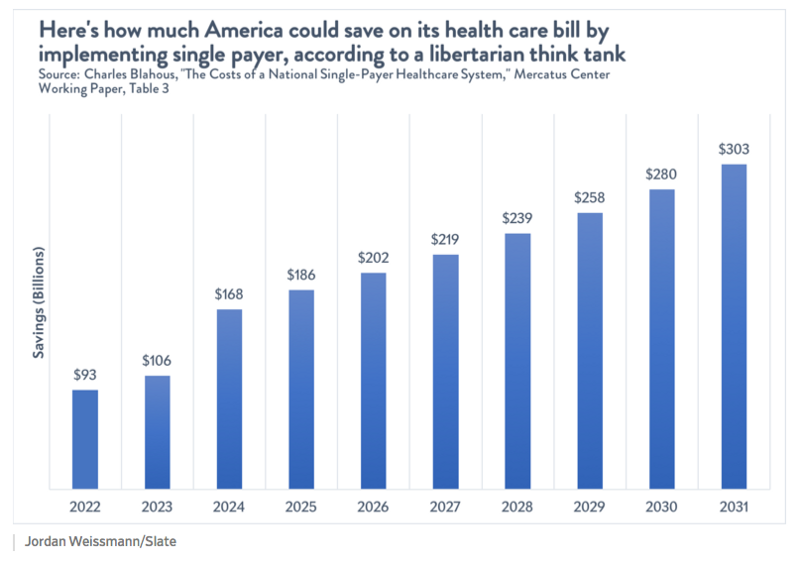 The framing of Blahous’ study is pretty down the line conservative, suggesting this $32 trillion for universal healthcare can only be achieved through a massive increase in federal spending and tax hikes. This also assumes that Democratic governments, even under the progressive social democrats such as Sen. Bernie Sanders (I-VT), won’t cut or decide to reallocate the funds of certain programs if under their control.

The study, examined by economists and healthcare policy experts such as Ernie Tedeschi, David U. Himmelstein and Steffie Woolhandler, actually shows Medicare-For-All is the more fiscally responsible policy, given it reduces U.S. spending by lowering payments to doctors and hospitals to Medicare rates compared to the private sector. In their written analysis for The Intercept, Himmelstein and Woolhandler also estimate the government would save $8.3 trillion over 10 years in administrative costs alone. This estimate already takes Blahous’ $32.6 trillion to $24.3 trillion.

“The Mercatus Center’s estimate of the cost of implementing Sen. Bernie Sanders’ Medicare for All Act (M4A) projects outlandish increases in the utilization of medical care, ignores vast savings under single-payer reform, and fails to even mention the extensive and well-documented evidence on single-payer systems in other nations — which all spend far less per person on health care than we do,” Himmelstein and Woolhandler told The Intercept.

Even under the worst case scenario, illustrated by the right-wing enemies of Sen. Sanders, the plan is more cost-effective than giving for-profit insurance the monopoly. Universal healthcare allows the government to act as competition to the private sector, giving Americans the alternative of using their tax dollars to replace the premiums they take out of their paycheques. Sen. Sanders, in sarcastic fashion, immediately thanked the despised conservative mega-donors, “of all people,” for “accidentally making the case for the Medicare-For-All” system in their anti-Medicare analysis.

Thank you, Koch brothers, for accidentally making the case for Medicare for All! pic.twitter.com/speuEL6ETC

The argument behind Medicare does require large amounts of spending. Sanders and his supporters don’t pretend it’s so cheap it’ll be a blip on the economic radar. But it’s more than just an economic argument, it’s a moral one. Citizens, regardless of their background, shouldn’t be afraid to go to the doctor because of their economic status.

Humanists see the Harvard statistics that 45,000 Americans die every year because of their lack of basic coverage and see a moral failing. Even if you’re the most diehard conservative in the deep red South, the moral and economic mixture here is compelling. Just imagine what saving over 450,000 lives over 10 years does to help stabilize budgets, reduce debts and deficits accumulated across time, and fund things like the military (let alone being healthy enough to serve in said military), all at a lower cost than the U.S. already is paying now.

How can you afford not to pay for that?