Sen. Kamala Harris, a California Democrat and a potential 2020 presidential candidate, is often framed as a standard corporatist. Despite being a recent addition to federal politics, the freshman senator has been criticized by her progressive peers as a member of Washington’s establishment, often citing her neo-liberal voting record, her silence on foreign policy, her donations from Wall Street, the secret lobbyist meetings she’s held in the Hamptons, and her defence of the Clinton legacy that was rejected during the 2016 presidential election. Such concerns often leave voters wondering if there are differences between the two major political parties at all.

Just a few weeks before the mid-term elections, however, Sen. Harris showed her new tax credit policy could be the populist, anti-poverty plan her critics have been waiting for. As reported by The Atlantic, the senator just introduced an ambitious new tax proposal titled the “LIFT the Middle Class Act,” a newly drafted bill that would essentially offer a sizable cash payment to most poor and middle-class households that are falling below living standards. Eerily similar to how a universal basic income (UBI) system could function, it seeks to enable tax-paying citizens to move up through the economy where citizens take out a portion of what they pay into the system for their work.

“Our tax code should reflect our values,” Harris said in a Thursday press release. “It is absolutely unconscionable that while many families continue to struggle, President Trump and Republicans in Congress are giving tax cuts to the top 1% and corporations while threatening Social Security and Medicare. It’s time for us to change that. Instead of more tax breaks for the top 1 percent and corporations,” she continued, “we should be lifting up millions of American families.”

Hence the bill’s name. The plan would seek to expand the social safety net to issue a guaranteed cash benefit to around 80 million tax-paying Americans making less than $50,000 to $100,000 per year. Singles would roughly get around $250 per month ($3,000 a year), married couples would get $500 per month ($6,000 a year), and the plan would “phase out” once the individuals/couples reach the above-liveable threshold. It does, however, exclude the poorest of America. If you make $0, you get $0 in earnings and taxable benefits. There are still problems given that the LIFT Act cuts them out with no guarantees of a jobs program, subsidized education, jobs training, etc. It still has standard “pull yourself up by your bootstraps” assumptions.

Harris’ plan — sure to be deemed radical by fiscal hawks — ironically costs the same amount as the 2017 Trump tax cuts, which are estimated to be around $200 billion over a years time and $2 trillion over the next ten years. Assuming her plan includes significant cuts to federal spending, which weren’t enacted under Trump’s budget, this could be an effective redistribution with a pro-worker slant. It’s an improvement upon current tax practice, but could be strengthened by the policies of other 2020 contenders, such as Sen. Bernie Sanders (I-VT) and Sen. Kirsten Gillibrand, coming out to support a jobs guarantee. If only the workers benefit from the system, put people to work.

Unlike welfare, these payments act as an effective tax deduction on the money an individual will report on their earnings by the year’s end, with the only difference being their regular cheques in the mail on top of their salary. These simple payments could raise 6 million adults and 3 million children out of stagnated poverty due to their limited resources, according to cited estimates from The Center on Budget and Policy Priorities. A graph from the Tax Policy Center even show how the brackets would work: 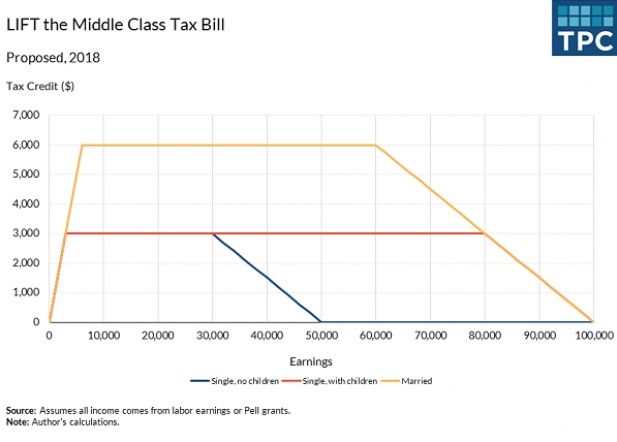 There is a case behind this type of radical intervention when considering the expensive American life. Harris acknowledges the bottom 20% of families earn $133 a month less than families of more than a decade ago, which is a fact that is only soured when considering economic competition (automation, outsourcing, immigrants) and rising costs (private health care, housing, child care, education, food on the table) that leave the average person in the dust.

This isn’t a result of a bad American economy. People aren’t making less because of less productivity. The American GDP is soaring, the dollar is more than solid, and President Trump should take credit for a healthy business class and stock market. That said, such widened inequality between the rich, poor and crumbling middle class needs addressing if ‘the forgotten man’ isn’t going to be left with crumbs.

After all, the 2017 cuts are polling horribly compared even to the tax INCREASES under Bill Clinton and George H.W. Bush. Republican ads are even moving away from touting the cuts after the majority of Republicans and their center-left opposition state the law “did nothing to help them.” A change to middle-class populism is just good politics.

The president is already making impossible promises to his base, suggesting he’ll somehow pass his new middle-class tax cut in November, exactly when Congress is out of session before the election. Meanwhile, Sen. Harris and her party are making their case for a post-2018 blue wave. Their solution isn’t just standard tax practice.

“This is an immodest proposal,” said Sarah Rosen Wartell, the president of the Urban Institute, speaking to the Atlantic. “But we’re facing some big structural changes in the economy.”

This plan could be a cure. As explained by journalist Monica Hunter-Hart:

“A tax credit directly reduces the amount of taxes you have to pay, dollar for dollar. In other words, if you owe $2,000 in taxes and get a $100 credit, you’d instead pay $1,900. That’s more significant than a tax deduction, which is taken away from the income you report so that you’re taxed on a smaller amount and can keep more of what you earn. If you get a $100 deduction and you’re in the 15 percent tax bracket, for example, you’d pay $15 less in taxes.”

If taxes are theft, after all, surely an effective tax cut to the little guy should be as celebrated as a standard cut to the CEO.