Justice hasn’t died in America just yet, it seems. A federal judge for the District of Columbia and Maryland has proceeded with the lawsuit against President Donald Trump alleging he violated the Constitution’s emoluments clause, through payments foreign and domestic officials have made while staying at his Washington, D.C. hotel.

Despite the suit being largely ignored by the mainstream media, who prefer to talk about special counsel Robert Mueller’s Russia investigation where the president is considered a “subject” more than a “criminal target”, we’re now seeing the legal troubles of the White House truly closing in — with U.S. District Judge Peter Messitte finding that the plaintiffs, D.C. Attorney General Karl A. Racine (D) and Maryland Attorney General Brian E. Frosh (D), may have a corruption case against Trump after all.

According to Bloomberg, while the unexpected ruling is just a preliminary action, seeing whether there is enough evidence to move forward towards trial, the lawsuit leaves the supposedly anti-establishment administration with corruption on their hands heading into the 2018 mid-terms. Whereas the president previously railed against the pay-to-play corruption surrounding former Secretary of State Hillary Clinton and the Clinton Foundation, Maryland and D.C.’s lawsuit alleges that Trump is engaging in similar behavior during his time in the White House — which would violate the emoluments clause of the Constitution.

What is emoluments clause?

Outlined in Article I, Section 9 of the United States Constitution, it reads:

“No Title of Nobility shall be granted by the United States: And no Person holding any Office of Profit or Trust under them, shall, without the Consent of the Congress, accept of any present, Emolument, Office, or Title, of any kind whatever, from any King, Prince, or foreign State.”

Essentially, it forbids the president from holding federal office, where he enacts foreign and domestic policy, while enjoying overtly persuasive bribes from foreign agents. While scholars frequently argue what counts as an “emolument,” from alleged sex acts to guests being granted temporary visits in White House guest rooms, this lawsuit alleges the president regularly violates the Constitution because his assets, such as the recently constructed D.C. hotel on Pennsylvania Avenue, are making money from foreign representatives who stay at the hotels.

To be fair, this wouldn’t be as much of a problem if these officials happened to pay the standard rate. It would be ego-boosting, sure, but it would put these officials on the same economic level as any MAGA hat wearer who decides to wine and dine in the gold tower. Only they don’t have the same standing as voters given the Kingdom of Saudi Arabia paid over $270,000 in hotel fees just to stay at the D.C. hotel, which far outpaces the standard hotel charges for the working and middle class of America. If thy name were President Hillary Clinton, a clear scandal such as this would be plastered all over the likes of Breitbart and Infowars — but partisans believe Daddy Trump can do no wrong, of course, which leads to the story swept under the rug with only print and alternative new media paying attention.

“Plaintiffs have sufficiently alleged that the President is violating the Foreign and Domestic Emoluments Clauses of the Constitution by reason of his involvement with and receipt of benefits from the Trump International Hotel and its appurtenances in Washington, D.C. as well as the operations of the Trump Organization with respect to the same. Plaintiffs have demonstrated their standing to challenge those purported violations because they have shown injury-in-fact, fairly traceable to the President’s acts, and that the injury is likely redressable by the Court.”

According to a report from Vox, the judge believes injuries can be traced to the president profiting off foreign payments, pertaining to the Trump D.C. hotel owned by son Donald Trump Jr. of the Trump Organization, that would otherwise go to state-funded hotels. Given that states have nowhere the influence on foreign policy as the commander-in-chief, losing these to a president sends up understandable red flags about the integrity of the office and if the clause was broken.

As noted by The Washington Post, Saudi officials and the like have a precedent of staying at other properties, such as the Washington Convention Center or other Maryland hotels, who don’t have as much sway over the president’s actions as his hotels. The judge, however, ruled in favor of the Justice Department’s request to dismiss cases that pertain to other properties of the organization, from the domestic Mar-a-Lago destination in Florida to businesses owned in other important nations such as Saudi Arabia, Turkey, and India, limiting the trial to the D.C. property.

This, sadly, doesn’t allow the judiciary to investigate the extent to which the president is in bed with foreign nations, considering it was only in March when the lavish Trump-Saudi weapons deal, estimated to cost $350 billion over a ten year period, was achieved — coming from a man who once claimed he would not be swayed by a sponsor of terror towards gays, women, Christians and overall dissent. 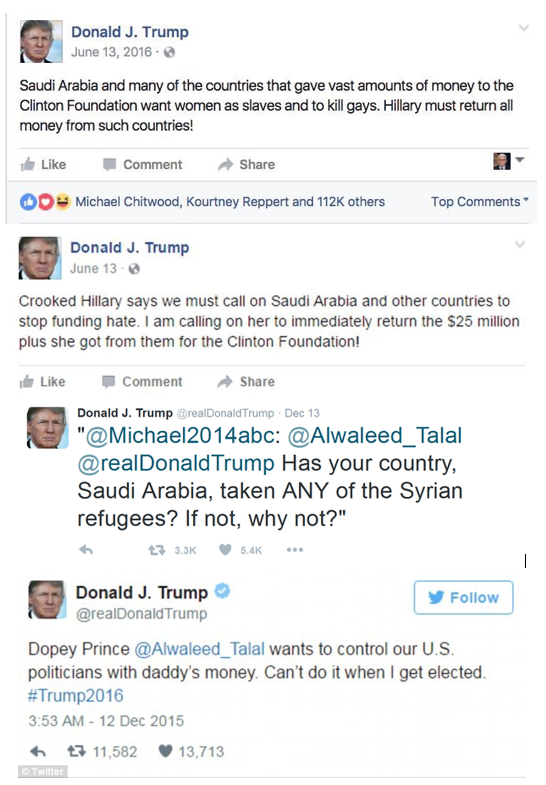 What does Trump do now?

It’s a question of whether the president is too late to save his own skin — and whether the egotistical businessman will take concrete measures to ensure Trump, the individual, is free from Trump, the brand.

Other presidents, for all their corruption scandals and political egos, weren’t so damn obvious about their whole affairs. In 2008, former Illinois Senator turned President Barack Obama decided to liquidate his assets and place them in Treasury bonds and index funds — which are not considered conflicts of interest. Other presidents from the Democratic Carter to the Republican Bushes placed assets in blind trusts — ones that weren’t the president’s billionaire kids who were placed in charge of hiring and firing members of the Trump administration.

Washington may cry about Putin and impeachment, but true action will only come from taking true cases of scandal to investigation, where Trump can justly be placed as the target, free from the partisanship that plague the Russia probe. Heading into the 2018 mid-terms, with Democrats hoping to ride a blue wave on DACA fear, understandable gun control measures and no comment on the problem with the systemic corruption in the party overall, Trump may only grow stronger if all they keep shooting are their weakest weapons.