Jemele Hill’s Suspension Is Not About Politics

I have a confession to make: I don’t watch football. I do care about the social commentary happening with NFL players and the anthem though, of which there have been many volumes. And the latest incidents with Jemele Hill from ESPN have once again changed the discourse.

The discussion has shifted from its original intent. Kneeling during the anthem was supposed to be about protesting racism and police brutality, but President Trump and his supporters turned it into a discussion about the anthem itself and the United States flag. It morphed into a tangent of respect for the military, but as so many politically charged situations have become lately, it boiled down to a matter of free speech.

Last week, ESPN announced the suspension of Jemele Hill after what they describe as her “second violation of our social media guidelines.” Last month, Hill publicly apologized after calling President Trump a “white supremacist” on Twitter. At the time, even the White House spoke out, with press secretary Sarah Huckabee Sanders saying that Hill’s comments were “a fireable offense by ESPN” despite the fact that both Hill and ESPN made it clear that the perspective was hers alone.

After Dallas owner and GM, Jerry Jones told the media that his players to stand for the national anthem (if they kneeled, the player or players would not play in the game) a Twitter user asked how fans should proceed if they disagreed with Jones’ stance. Hill suggested boycotting Cowboys advertisers.

“If you strongly reject what Jerry Jones said, the key is his advertisers,” Hill tweeted. “Don’t place the burden squarely on the players.” After sharing another tweet from a follower listing some of the Cowboys’ sponsors, Hill tweeted, “This play always work[s]. Change happens when advertisers are impacted. If you feel strongly about JJ’s statement, boycott his advertisers.”

The response was quick.

“Jemele Hill has been suspended for two weeks for a second violation of our social media guidelines,” ESPN’s statement read. “She previously acknowledged letting her colleagues down with an impulsive tweet. In the aftermath all employees were reminded of how individual tweets may reflect negatively on ESPN and that such actions would have consequences. Hence this decision.”

SportsCenter anchor Michael Smith sat out of the 6 PM episode of the show that evening after the announcement in support of Hill. And Jim Trotter, a senior NFL writer, appeared to speak for a lot of ESPN employees - particularly those of color - in his emphatic message of support.

“Black folk are tired and we have to recognize some of the things that are going on in this country and we have to be honest about it and meet it head on,” Trotter said. “If you are black and know the history of our country, you can understand her frustration. It is time we stop pretending it is not true...I wanted to say that I support her as a friend and a colleague. If anyone has a problem with that, that is on them.”

What’s interesting to me is the line in the sand that the network has drawn.

When Hill tweeted that President Trump was “unqualified and unfit to be President,” ESPN did not publicize any sort of discipline for her comments. Their PR office released a statement the following day noting that Hill’s perspective did not represent the company, but declined to share any disciplinary action taken with Hill. Conservative outlets, including the Federalist, the Daily Caller, and Breitbart chastised both Hill and ESPN, with many claiming that she would have already been fired if she was a conservative speaking out against a liberal politician.

ESPN has fired employees over social media posts before. The network famously canned Curt Schilling after a controversial and offensive cartoon criticizing North Carolina’s ‘bathroom bill.' Britt McHenry, another of the employees who were laid off, suggested her conservative politics played into why she was targeted. Don’t worry too much though- Schilling now works at Breitbart and McHenry appears regularly on Fox News. And let’s not forget that Hank Williams Jr. has reclaimed his ESPN gig after comparing Barack Obama to Hitler.

I think it’s safe to say the whole situation is confusing, and ultimately isn’t about political leanings at all. Jemele Hill has one clear job responsibility: to opine on the world of sports. And it’s hilarious that her tweets and opinions about current events and racism in athletics are what brought about her suspension. She was not calling for a boycott of the NFL; she was expanding the conversation surrounding NFL players and the anthem. She shared her perspective that thanks to Jones’ statement, players could be demonized for selling out or lose their job if they didn’t comply, and called for more accountability from fans. In other words: she was doing her job.

But in reality, her insightful and edgy tweets could create financial difficulties not only for the Cowboys, but for her employer. Hill’s commentary seemed to tick all the boxes of ESPN’s guidelines: 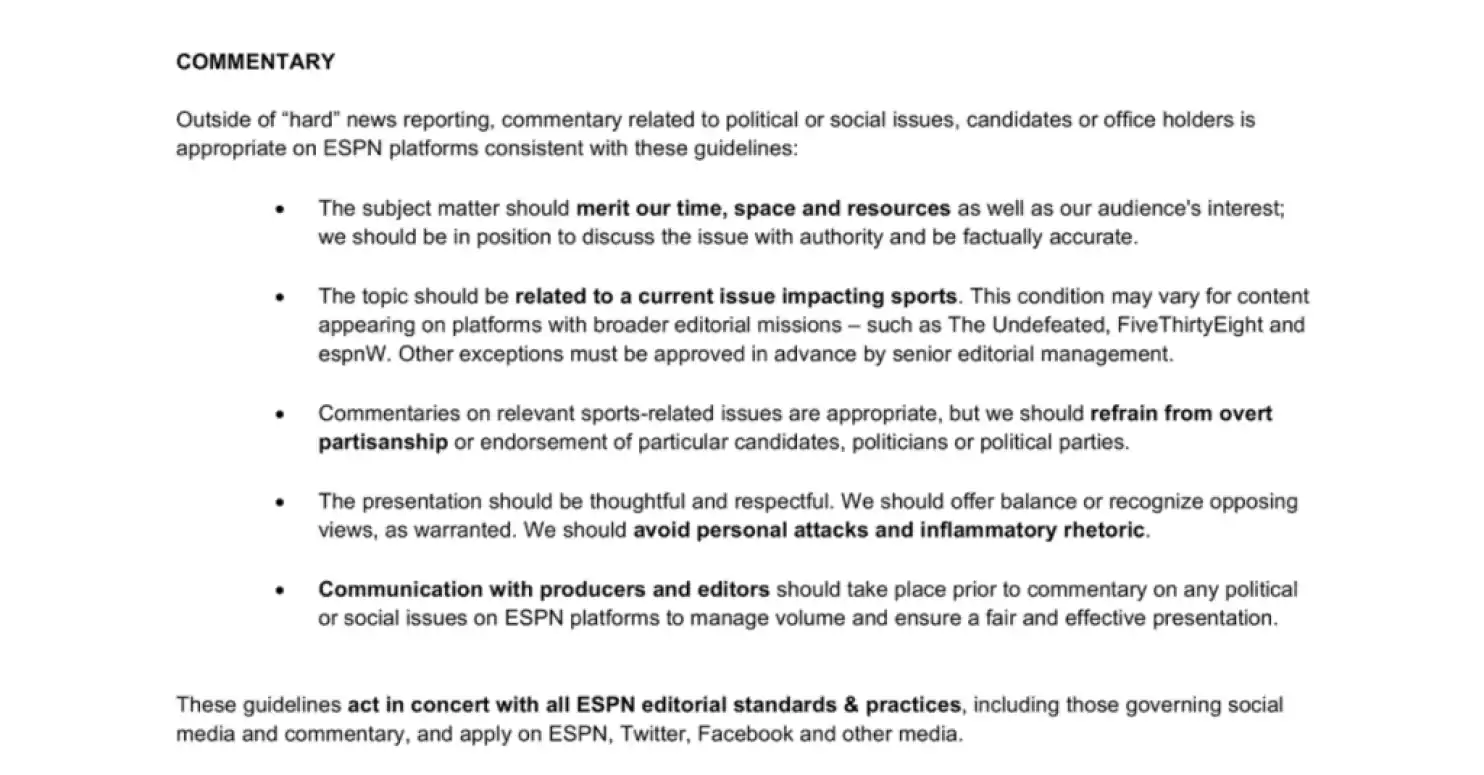 But a final entry should read like this: the presentation must be thoughtful and respectful and should never suggest an action or protest that could be detrimental to the multibillion-dollar interests of ESPN. It’s pretty much an unspoken rule in the media: don’t piss off the advertisers. If you need a reminder of how badly that could play out, let’s browse the history of the YouTube ad-pocolypse.

I honestly doubt the network cares about her political views, so it’s not a matter of free speech as many left-leaning sites are claiming. It’s not about caving into Trump and conservatives. Once Hill started tweeting about ESPN’s livelihood, she got benched. So stop making declarations about how she’s being censored or shut down because of pressure from the White House. In reality, this is about the all-mighty dollar.