How to Get Away With Murder? Be A White Cop

“Show me proof.” “Pictures or it didn’t happen.” “Seeing is believing.” 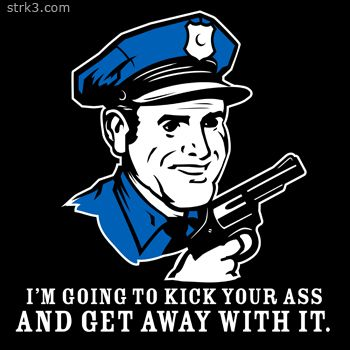 We all acknowledge that witnessing something occur with our own eyes goes a long way towards accepting it as fact. There are plenty of ways to manipulate materials to create false evidence, but editing imagery and videos take a lot of effort and technology to make them plausible- and are almost always uncovered by other manipulation experts.

So the trial of former officer Michael Slager should have been a slam-dunk for the prosecution. On April 4, 2015, a bystander with his cellphone recorded Slager shooting Walter Scott eight times in the back (with five bullets striking Scott’s body) from at least 17 feet away. Police scanner audio analysis revealed that Slager radioed in claiming Scott grabbed his taser six seconds after firing his final shot at the unarmed man. The video continues on to show Slager grab his taser and move it over to the body, before cuffing the 50-year old black man who had already slumped over on the ground.

Earlier this year, a Gallup poll found only 9% of Americans had confidence in Congress, 26% had any faith in newspapers, but a whopping 56% of the public trusted the police. That’s a higher percentage than those who voted for Donald Trump. And Slager’s defense used this to their advantage: they argued that the jury should trust his account of the shooting over the video of Slager unloading rounds into a fleeing man. They convinced enough people on the jury that the judge ended up having to declare a mistrial on Monday.

It’s probably one of the main reasons officer Timothy Loehmann was not charged in the death of Tamir Rice, why officer Dante Servin was acquitted for shooting into a crowd and killing Reika Boyd, and why officer Daniel Pantaleo was not indicted in the death of Eric Garner. I can list more, but really, what’s the point? Police officers kill, and rarely are they ever held accountable. The fact of the matter is, police are almost never prosecuted for shootings, and not just because the law allows them a lot of leniencies when using force on the job. Juries tend to side with the police. David Rudovsky, a civil rights lawyer who co-wrote Prosecuting Misconduct: Law and Litigation, speaks of this innate trust citizens have of police.

“There is a tendency to believe an officer over a civilian, in terms of credibility. And when an officer is on trial, reasonable doubt has a lot of bite. A prosecutor needs a very strong case before a jury will say that somebody who we generally trust to protect us has so seriously crossed the line as to be subject to a conviction.”

But here’s the thing: Slager’s misconduct was obvious. It sparked so much outrage, North Charleston reacted swiftly: within days, Slager had been arrested and charged with murder. In June, he was indicted on murder and charged with voluntary manslaughter. He was released on bond at the beginning of 2016 and went on trial for killing Scott in October. Compared with other police shooting cases, there was undeniable damning evidence. In two notes to Judge Clifton B. Newman, the jury’s foreman indicated that it was clear jurors would not be able to come to a consensus. Falsely reported as one holdout juror, Dorsey Montgomery II (who acted as foreman) told the media that while there was one juror who thought Slager was not guilty, there were actually five or six who were undecided.

Five or six. Even after being confronted with video evidence of Slager blatantly shooting Scott in the back that directly contradicted his report, half a dozen people still thought the police officer might have been in the right. Slager claimed Scott fought him while resisting arrest and grabbed his taser, and Slager feared for his life. Completely understandable. A large, 50-year-old black man running away from him, with his back facing Slager, is life-threatening. Perhaps Slager sleeps with a night light too, because he’s clearly afraid of invisible monsters.

I would be remiss if I didn’t bring it up. I originally didn’t want to delve into the racial debate, but we have to acknowledge the fact that Scott’s death is another statistic in a long line of white police officers killing unarmed black men. The fact that I have to stipulate that these black men were unarmed in the first place speaks to how distrustful police and the public are of black Americans. And this outcome was the same as every other attempt to prosecute police for killing civilians, especially black Americans. This mistrial comes just weeks after yet another filmed shooting case in Ohio, where a Cincinnati police officer shot and killed a black man after pulling him over for a missing front license plate. To ignore the blatant racial profiling and overuse of force police exercise against people of color is to admit to being completely ignorant of the world.

Don’t say you’re “color blind.” That’s not how America works. Look at how far Trump’s campaign of racism and discrimination got him. And in this Slager case, the jury was stacked in his favor. Of the 12 jurors involved in the case, Montgomery the foreman was the only African-American on the panel.

“Due to the society that we live in, race will always be a factor,” he said, but he added that he did not believe race played in the decision for “the majority” of the jurors.

Unfortunately, juries are not all created equal, especially this one. This is even more important in cases like this when racial disparities and implicit anti-black bias in law enforcement perpetuate discrimination among citizens. This jury looked nothing like Scott, nor did they look like a reflection of North Charleston, which is 47% black, 38% non-Hispanic white, and 10% Hispanic, or Latino of any race. Instead, six white men, five white women, and one black man sat on the jury. The composition of this jury and the inability to reach the most obvious verdict is not a coincidence.

This trial has many implications, too many for us to cover in just one article. However, one of the main conversations happening is around excessive force used by police. Blind supporters of law enforcement often argue that cameras regulating police behavior will only show officers doing their job. But as case after case is tried without any justice for the victims, it’s evidently not true. The outcome of Slager’s mistrial reminds me of another historic verdict as well. Walter Scott is now joining the ranks of Rodney King, and it’s heart-breaking and infuriating. This case once again proves that even video evidence cannot overcome subjective bias in the criminal-justice system. Apparently, seeing is not believing anymore.

Ultimately, juries are a reflection of the “fake news” crisis permeating the public. A gullible group of people believes outrageous claims that reaffirm their world views. Combine this with the constant elevation of the uniform above average citizens creates an unhealthy pedestal from which the police are viewed as infallible, and subsequently, above the law they’re supposed to uphold. In our current court system - as black America has long known - an indifferent public sees evidence of outrageous actions but chooses not to believe in order to preserve their world perspective.

So in our current criminal-justice system, if you’re white and a cop, you can shoot anyone you want and get away with murder.