When does life begin? This is going to be an important question in the United States in the days to come, especially now that Ohio lawmakers just passed the “Heartbeat Bill.” It would ban abortions in the state as soon as a heartbeat is detected, which usually occurs about six weeks after conception. This bill that Ohio Republicans passed on Tuesday would be the strictest abortion law in the United States, and right now it’s sitting on Governor John Kasich’s desk. He has ten days to decide whether or not to veto it.

Republicans can feel the winds of change in the air. Donald Trump, a known advocate for the pro-life movement, has been elected President of the United States. Any Supreme Court Justices selected and appointed are certain to lean on the conservative end of the spectrum. State legislators have looked to pass similar laws in recent years, but they were never able to pass Senate. With a new Commander in Chief at the helm, it looks like things are about to change – for better, or worse. Ohio Senate President Keith Faber (R.) said “One, a new President, new Supreme Court justice appointees change the dynamic, and that there was a consensus in our caucus to move forward,” just moments after the final vote for the bill passed. When asked if he thought the bill would last in any legal challenging, Faber said, “I think it has a better chance than it did before.”

Kasich can sign the bill, veto it, or do nothing for the next ten days. If he signs it or sits on his thumbs, the law would pass in Ohio in early 2017. If Kasich vetoes, the bill would be stopped unless three-fifths of the Ohio State House and Senate overrides the veto. This is certain to spark plenty of controversy: Abortion has been a hot-button issue in the United States since the Supreme Court passed Roe v. Wade in 1973, a landmark decision that extended the 14th Amendment for a woman’s decision to have an abortion.

Prior to the vote, Republican State Senator Kris Jordan proposed an amendment that would take provisions from the Heartbeat Bill and extend them to House Bill 493 – a bill that aims to simplify the process in which medical professionals could report cases of child abuse. In a statement, Jordan said “We are a pro-life caucus… The passage of this legislation in the Ohio Senate demonstrates our commitment to protecting the children of Ohio at every stage of life.” Ohio State Senator Charleta Tavares (D.) intended to vote in favor of the child abuse bill before it was updated to include the Heartbeat provisions. Unappreciative of the changes made to House Bill 493, Tavares commented candidly on her decision to vote against it:

"I believe everyone has a right to their own body. We allowed a good bill that protects the health and safety of our children to be bastardized into a government takeover of women's wombs."

If Kasich allows the Heartbeat Bill to pass into law, it would be the most restrictive abortion law in America. Many states have some restrictions on abortion, but this one would take the proverbial cake. An infographic created by CNN shows generic restrictions broken down on a state level: 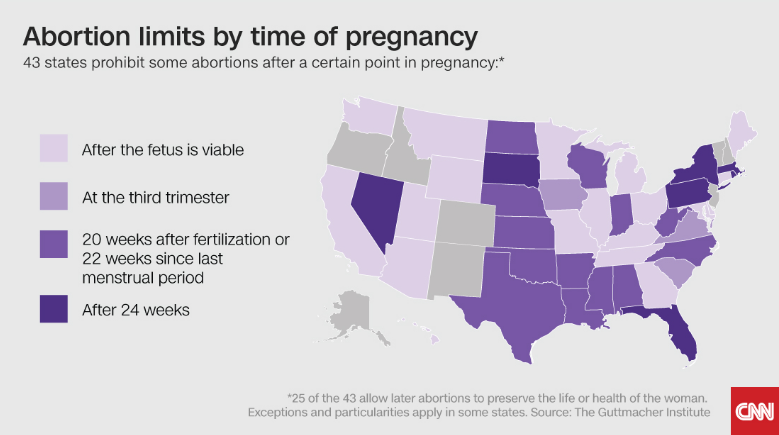 If Heartbeat passes, it looks like we’re going to be painting Ohio black.

Fetus viability is a pretty loose term. A doctor alone can determine whether or not the fetus is viable, but the American Pregnancy Association says that it can begin at 24 weeks. The heartbeat of a fetus begins at around six weeks – if the law gets passed, this wouldn’t allow a woman much time to consider whether or not to get an abortion. Most women don’t even realize that they’re pregnant until 8-10 weeks after conception, and the Heartbeat Bill would leave them completely out of luck.

Current Ohio law prohibits abortion after fetus viability, which is currently set at 20 weeks according to the state. Beyond this window, a doctor may not perform an abortion unless the determination has been made that the fetus could not possibly survive outside of the womb. The current law also allows for a late-term abortion if the doctor deems it necessary to protect a woman’s health.

Arkansas and North Dakota passed similar heartbeat restrictions on abortions in their respective states, but both were ultimately shot down by the Federal Court as unconstitutional. With Donald Trump running the show and conservatives licking their chops, the face of the entire landscape is starting to change. What is currently deemed as unconstitutional in most states may be perfectly legal and “normal” in the days to come.

Governor John Kasich ran in the Republican Primary for the 2016 presidential nomination but failed miserably. If you recall, Donald Trump just couldn’t stop making fun of the way the man ate food. Combined with Kasich’s “low energy” demeanor and seemingly moderate sensibilities, Trump’s bullying guaranteed that he had no chance to win the nomination for the GOP. Kasich most likely will not comment on the legislation to come, but where does he stand on abortion rights? He has stated that he is “pro-life, with the exceptions of rape, incest, and life of the mother.” He signed a bill earlier this year that would prohibit Ohio from contracting health services from any service which conducts or promotes abortions, effectively defunding Planned Parenthood in the process.

Pro-choice organizations and advocates aren’t going to accept this bill passing into law without a fight. In a statement, Planned Parenthood said that the Heartbeat Bill “intended to make abortion legal in the state of Ohio. This bill could take away a woman's right to make her own medical decisions before she would have known she had a decision to make.” Iris Harvey, the president and CEO of Planned Parenthood Advocates of Ohio said “Not only is this shameful, but it’s dangerous for women.” Many pro-choice advocates don’t believe the law would be deemed as constitutional in federal court, and plan to question its legality should it pass in the state.

From the 20th century onward, abortion has been a polarizing issue in the US. If you’re like most younger, liberal Americans, a woman’s right to choose whether or not to have an abortion seems like a fundamental right of a person’s body that cannot be stripped away. If you’re religious, the morality of your ideologies may not allow you to accept the legality of terminating a fetus. Both sides of the table believe that their position is correct, and both are pretty difficult to argue against.

Do you take a woman’s rights away? What if the woman was raped, and would be forced to look in the eyes of a child who shares the face of her violator? What if the child had horrible birth defects in the womb, and would have trouble surviving in the world? Would it be “right” to allow that life to carry on? On the other side of the coin, at what point does the termination of a pregnancy constitute murder? From the conservative spectrum, if you terminate a pregnancy that’s what you’re doing – killing a life, ending a heartbeat. Like many Americans, I’m pretty “wishy-washy” when it comes to abortions. Now that a line has been drawn in the sand, however, it seems as though we may all have to make a hard decision and back our respective advocates.