Since the election of Donald Trump, we've seen all kinds of remarks from Democrats. They claimed throughout the campaign that he was a racist, sexist, xenophobe... despite evidence to back it up.

Now sure, he wanted (and still wants) to keep out murderous, evil, criminals from seeping through our Southern border. Somehow, I still haven't been able to sort it out myself, his critics on the left equate that with racism. In the above article, illegal immigrant members of a New Jersey gang stabbed and beat three teenagers with bats, hacked their bodies apart, and buried them in the woods.

But no, it's wrong to keep people like this out of our country.

So now, in 2017 America, wanting to keep citizens safe from horrible violence is considered racist. I guess you can call anything racist if you're politically motivated enough. The same way they call us bigots for wanting to keep men out of women's bathrooms that our daughters and wives use.

There has been a rise in hate crimes since the election- but most of those were hoaxes. Horror stories of young Muslim women getting their hijabs ripped from their heads by white men were the stuff of fiction (and not very good fiction, if you ask me. I should know, I'm a writer).

But, despite my sarcasm, there has been a shocking rise in hate crimes around the United States. Recently we've learned about Jewish cemeteries getting vandalized, with headstone knocked over.

Vandals have broken and overturned more than 500 gravestones at a Jewish cemetery in Philadelphia, the latest in a spate of recent bomb threats and attacks against sites for Jews across the United States.

Hundreds of headstones, some of them more than 100 years old, were cut in half, local media reported Sunday...

The attack comes a week after more than 100 headstones were damaged at a Jewish cemetery in St Louis, Missouri.  (via Breitbart)

This is a real crime, not a hoax or something made up by people who want attention. Attacks on a community, especially their place of burial, is unacceptable. But who's to blame? If you ask the irrational left, of course, it's Donald Trump

Make no mistake this is what they mean by make America great again https://t.co/9wfnwYy7CC

But according to Sarah Silverman, everything that's wrong with America is Donald Trump's fault. Pseudo celebrities like Shaun King have virtue signaled up a storm over anti-Semitic attacks that seem to have coincided with Trump's victory. They want you to think that the racist white people that voted for Trump are now empowered to go on a rampage against minorities.

Except in the case of that graffiti swastika, it wasn't a white kid.

Officials at Lakeville South High School say they’ve caught the perp behind a string of racist and anti-Semitic graffiti that caught the attention of social justice heavyweights like Sarah Silverman and Shaun King.

Unfortunately for those SJWs, however, the perp’s identity may not fit into their narrative.

According to CBS in Minnesota, the student is “non-Caucasian” with “significant special education needs.” (via Milo)

Oh. It wasn't a white, racist Trump supporter after all. And while we don't know the identity of the perp, being that he was a high school student, I'm guessing he didn't vote in the election.

In the case of the destroyed Jewish headstones, news has yet to come out revealing the identities of the attackers. But considering this isn't an entirely new tactic against Jews, we might have some evidence as to their identity:

We don't know who is behind this growing trend; all we can do is realize it is a problem that must be confronted. I would also be remiss, though, not to mention the Muslims in St Louis who led a crowd-funding campaign to raise over $100,000 to rebuild the destroyed graves.

Anti-Semitism seems to be a poison that lurks in many corners. It does not obey party lines, nor does it adhere to a particular race. Even I have been attacked over my support of Jews online, from so-called "conservatives" who went as far as denying the actual death toll in the Holocaust.

I can say with certainty that President Trump is not the cause of this ancient form of hate.

In fact, the Commander in Chief's people are actually working quite hard to help the Jewish community. After one of the recent acts of vandalism, who showed up to help? One of the most hated politicians by the left: Vice President Mike Pence. 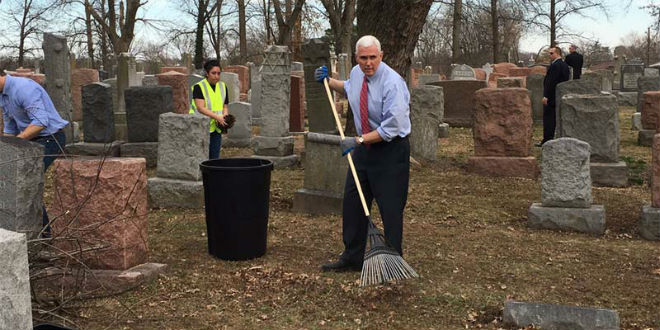 Vice President Mike Pence on Wednesday strongly condemned a recent spate of anti-Semitism before visiting a vandalized cemetery outside of St. Louis.

Alongside Missouri Gov. Eric Greitens, Pence stopped by Chesed Shel Emeth cemetery in University City -- where a vandal or vandals toppled and damaged more than 100 headstones in the past week. (via CNN)

Call it a PR stunt if you like, but the Vice President of the United States doesn't need to take time out of his day to address a simple case of vandalism. Unless, of course, he wants to show his support for the Jewish community.

Most recently, we're learning about new attacks against Jewish people in the United States, including bomb threats against schools and community centers. The police have caught the guy, and guess what? He's no Trump supporter.

According to multiple media reports, police have arrested one Juan Thompson from St. Louis in connection with more than six bomb threats against Jewish community centers, schools, and a Jewish museum... Following news of Juan’s arrest, speculation was rampant on Twitter that this was the same Juan Thompson that was fired from The Intercept for fabricating sources... Juan Thompson also apparently voted for Bernie Sanders. (via Milo)

I voted for Bernie Sanders, but his supporters are annoying as fuck. "I almost cried when I got a Bernie sign". Yuck. #DemsInPhilly

Don't know what to say about that kind of tweet against your fellow Bernie supporters. Maybe it's indicative of why the left lost; no systemic comradery?

Now look, does this mean that because recent attacks against Jews have come from liberal individuals that the left is entirely to blame? I don't think so. You can find anti-Semitic scum in dark corners of the right as well (just search social sites like Twitter or Gab, and you'll find them). But it does show a distinct difference between what some righters say and other lefters do.

The liberal voices online have been so quick to condemn Donald Trump as some kind of racist propagandist, yet without any signs that his followers are ready to go to war against minorities. At every opportunity, President Trump has looked for ways to support and uphold Americans of all races and backgrounds. As well as our Israeli allies.

Or do you think this was just for show:

But when the truth comes out and we learn that a liberal or at the very least someone not associated with Trump is committing terrible acts of anti-Semitism, where is the outrage from the media?

I have yet to see Sarah Silverman call out Juan Thompson, a fellow Bernie supporter, for his anti-Semitic tweets or his attacks on Jewish schools, community centers, and museums. We don't see NY Times or HuffPo decry these kinds of attacks with the same kind of vehemence they do over imagined problems within Trump's cabinet, or the many hate crime hoaxes that were crafted to malign conservatives.

It leaves me to wonder if these liberals even care about the causes they claim to support. If Silverman or King or anyone else on the left hates and condemns racism, then why don't they call it out when it's done by other liberals?

Why aren't they neutral in the face of real evil? If an alt-righter, conservative, republican, or libertarian does something terrible, I will call it out. I won't sweep it under the rug, just to protect the right's image.

Shouldn't the left do the same?