“Polling numbers show that most Americans disapprove of and distrust the media,” began Bob Woodward, associate editor for The Washington Post, addressing a Correspondents Dinner crowd of indicted politicians and reporters. “This is no time for self-satisfaction or smugness.”

This week, President Donald J. Trump was, once again, put under the inconsistent media microscope for a very legitimate concern regarding any president: their mental and physical health for the job.

If you’re a consistent journalist, everything from their cognitive ability to their durability for the most stressful job imaginable is up for consideration… unless you’re on the left, the untouchable name is Hillary Clinton, the 2016 Democratic rival with her own personal and financial ties to the media industry. Likewise, on the right there’s Donald Trump, the perceived Republican demi-God. Question these candidates’ abilities and the common word branded to your name is “conspiracy theorist.”

The label was notably used in The Atlantic, the neoconservative publication headed by reluctant Clinton supporter David Frum, whose associate editor Nora Kelly declared any questions regarding Clinton’s coughing spells, alleged seizures and near collapse at a 9/11 memorial event a “sexist conspiracy theory” from the 1950s, which was echoed down the media line in Vox, Vice, The New Yorker, The Huffington Post, The LA Times and CNN’s bald-headed voice-of-narrative Brian Stelter. Using his platform on Reliable Sources, The Hard News Network exposed the clearest example of inconsistency on health issues, in one breath decrying Sean Hannity’s questions regarding Clinton as “speculation unfit of journalism,” while saying it’s “fair” to do the same of President Trump, a man who has trolled his network multiple times.

And they didn’t stop there. After the president’s medical exam last week, conducted by Dr. Ronny Jackson, the White House physician, the media speculated even further to the point of crazy. The Washington Post didn’t just question the president’s health, but his own doctors!

MSNBC host Rachel Maddow, known for her extensive ramblings on the oddly structured “Russia Scandal,” speculated that the doctor was lying on Trump’s behalf or didn’t write the president’s doctor’s note. Why? Well, she cited that the writer, who may have been a staffer writing on their behalf or anyone, misspelled the name as “Ronnie.”

Dr. Sanjay Gupta of CNN, making an outside analysis, concluded the president must have heart disease. “He is taking a cholesterol-lowering medication, he has evidence of heart disease, and he’s borderline obese,” Gupta elaborated. “Can you characterize that as excellent health?”

And the right-wing is no example of consistency either. On his Fox News Channel program last Friday, Hannity went after MSNBC host of Morning Joe, former congressman Joe Scarborough, for questioning the president’s health regarding signs of dementia.

“All of the stress at NBC News seems to be getting to crazy liberal Joe Scarborough,” he said, claiming that Scarborough had experienced “a complete mental and emotional breakdown on national television.”

This sensitivity regarding speculation about Trump’s mental health is hilarious considering last year, Hannity had no problem with speculation about Clinton, claiming she’d had a stroke, echoed accusations of having “mini-seizures” in front of reporters, even asserting she had some form of Parkinson’s disease.

This was the same case with Alex Jones, the other big-boned conservative outraged by criticism towards Daddy Trump, who also argued she had Parkinson’s disease on his site InfoWars. It was Salon that scoured through the website finding claims of her suffering seizures from camera flashes, asserted brain tumor claims, injections to treat seizures, claims of epilepsy or syphilis. They even said Clinton might fucking die before Election Day, possibly forced to drop out of the race for health reasons.

Nobody appears to be consistent on this issue, and have left legitimate concerns regarding both open to deflecting through “whataboutism.” On TrigTent, having a team voices from the left and right, our examination of Trump’s health claims won’t fall into the hypocritical, hyperbolic trap.

Regarding President Donald Trump’s overall health, Dr. Ronny Jackson, the White House physician, concluded on January 12th that the president was in “excellent shape,” both in a cognitive and physical sense. The health exam finds that the president weighs 239 pounds, an overweight but otherwise healthy size for a man, sporting normal blood pressure.

Jackson said the president also passed a cognitive test, used to look for signs of dementia, stating he passed with flying colors. Jackson told the White House press room that quote “there’s absolutely nothing I am withholding from this [report],” which you can read in full below: 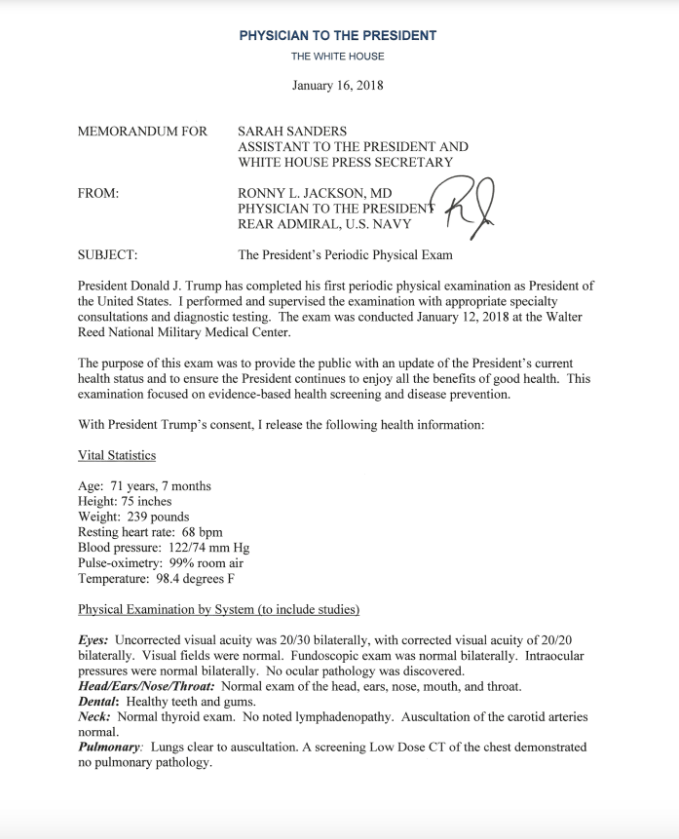 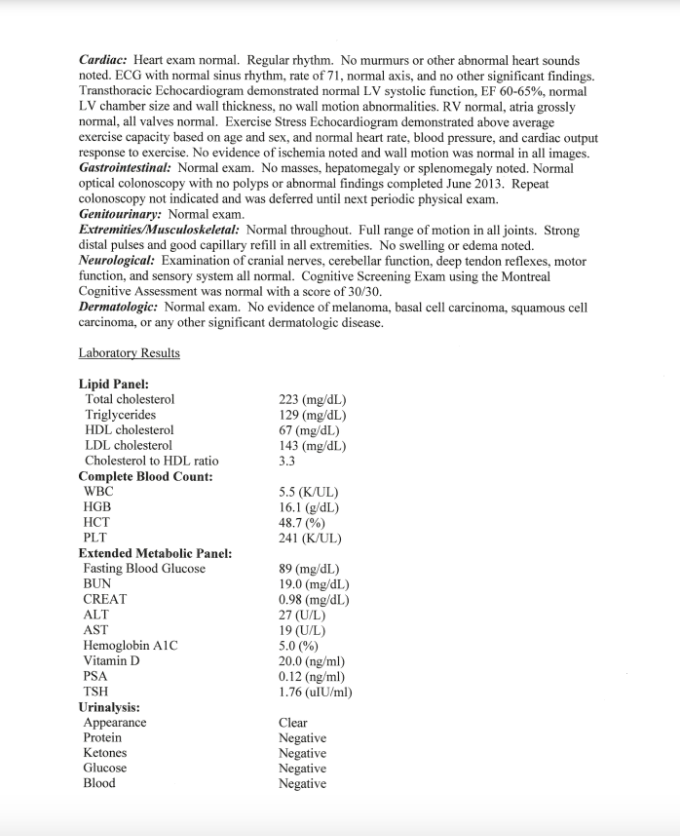 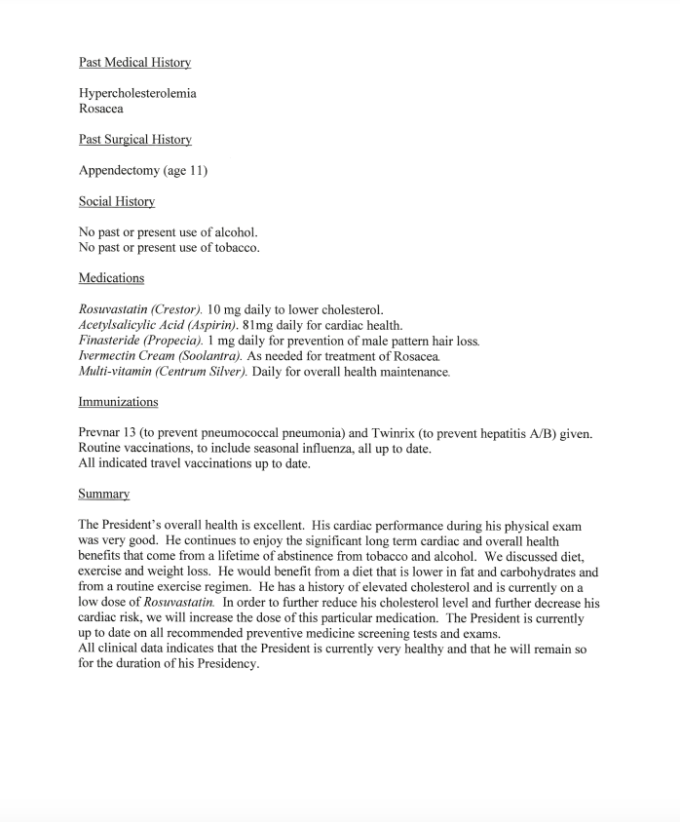