The United States is facing a free speech crisis. As Republicans lose their absolute control over the three branches of government, where virtually any legislative changes were within their grasp, there remains the issue of political activists, commentators and entire media outlets of all stripes being subjected to censorship by the hand of unaccountable big tech corporations, leaving users without any policy protections to preserve their online liberties.

On Saturday, the latest victim of Silicon Valley’s selective gatekeeping was Michael Knowles, an actor, comedian, and columnist for The Daily Wire, who revealed through his Instagram account he was recently suspended over a joke pleading for Democrats to vote on November 7th, which was the Wednesday after the mid-term elections. Twitter, known for their selective suspensions, told the columnist his (unoriginal) joke was a violation of an unspecified rule present within their terms of service, though failed to actually cite the rule for verification.

The administrators, free to police their site without an impartial charter, a mandate for due process or representatives on behalf of both company and user, essentially forced a man to delete his tweet, without any proven justification, or his account would remain locked forever. The censorship culprit wasn’t big tyrannical government, but instead, a big corporation using intimidation to make their ultimatum clear, coercing someone to either take the word of the site as gospel or to fuck off back to the free market. 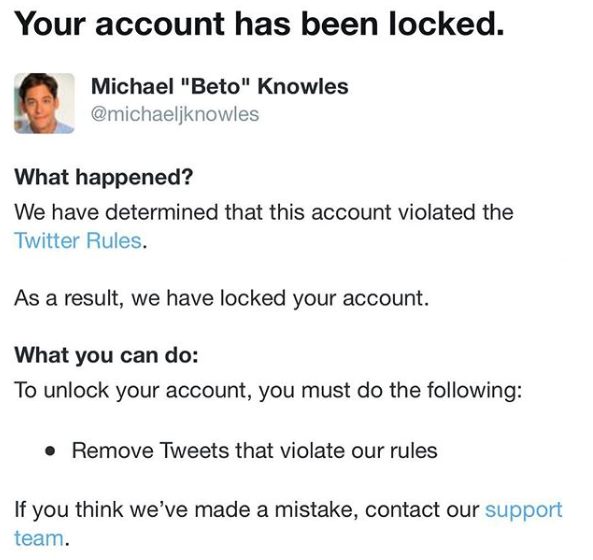 He then proceeded to cry about Twitter’s unfair speech practices, citing credible instances where Twitter tolerate not only the anti-Semitic posts of bigots the likes of Louis Farrakhan, who recently compared the Jewish people to “termites,” but their allowing of the recent terrorist threats being made against nearly a dozen Democratic donors and politicians, including former presidents Clinton and Obama, who were later sent intercepted explosive devices in the mail. The site’s priorities are clearly out of whack.

From this, one could get the mistaken impression that Knowles and his brand of modern conservatism — often championed around college campuses through partnered shows and organizations such as Turning Point USA, the Young Americas Foundation, PragerU, The Rubin Report, Louder With Crowder, among others — are taking a principled stance on the grounds of free speech and due process, this time within the context of tyrannical big business.

This would require conservatives to reconsider enforcing newly drafted consumer protection laws, such as the proposed Internet Bill Of Rights introduced by Rep. Ro Khanna (D-CA) on behalf of the new House Majority Leader Rep. Nancy Pelosi (D-CA), who decided to echo the constitution in outlining the online rights, liberties and entitlements of the public.

Republicans had all the votes to pass such legislation, which could protect their own voters from big tech, except nothing was done on this front before losing seats in the midterm elections.

This notion of principled resistance, however, was debunked by Knowles’ own website that seemingly defended the site’s censorship, agreeing with the view that “Twitter is, of course, a private platform and can execute its rules in any way it sees fit.” This sentence, conceding defeat to Twitter’s free market status, highlights the failure of modern corporate conservatism. If there was ever a time where the term “cuck-servative” need apply, where solutions to problems amount to waving fists in the air, not policy, this is surely it.

Their implied objection isn’t based on a fundamental belief against unaccountable institutions and their policing of speech, whether it’s in the public square or the private sector, but is instead a partisan defense of their own Republican team.

“Twitter [has] failed to take action against their own left-center users who made the same joke”, the article continues, showcasing several tweets from leftist users who also urged their rival Republican voters to instead go vote on Wednesday. 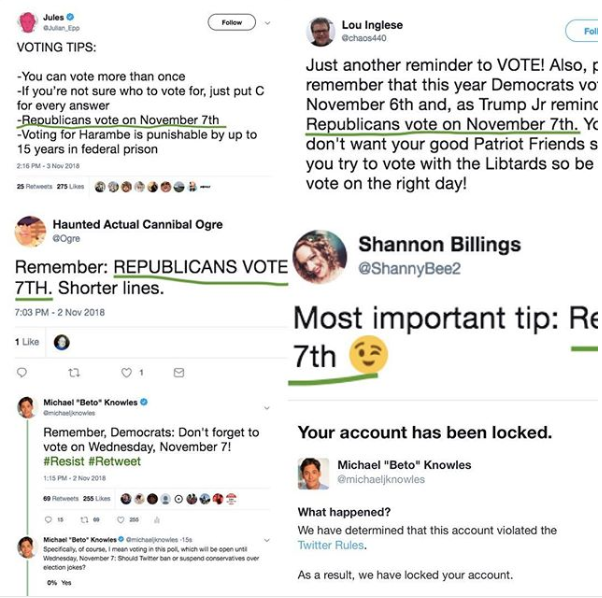 “Lots of left-wing accounts make the same election joke I did (without the punchline) and remain fully operational,” Knowles argued, “yet when a conservative jokes about this very phenomenon, Twitter blocks [just] three days before the midterm elections! Tell @Twitter to stop the censorship against conservatives!”

In his latest episode of The Michael Knowles Show, the comedian made a joking suggestion his removal was a potential violation of current federal election laws, similar to the “Russian bots” seen in the media cycle, though made no mention of new policies that could protect online free speech universally.

As the “largest conservative platform in the nation,” an outlet like The Daily Wire has the opportunity to showcase authoritarian values against freedom of speech not only infect the unaccountable government institutions, but major corporations as well… except this never happens, as shown in our exposé on the dark money ties preventing true free speech.

As demonstrated in a recent video by political commentator Shaun & Jen, outlets like The Daily Wire and PragerU, both of which are owned by the billionaire big oil tycoons Dan and Farris Wilks, often portray unregulated free market capitalism in a “literal cartoon-ishly simple” fashion where stick figures are shown trading money for goods and everything is right in the world. They’re easy enough for even the most uncritical of children to understand in less than five minutes. 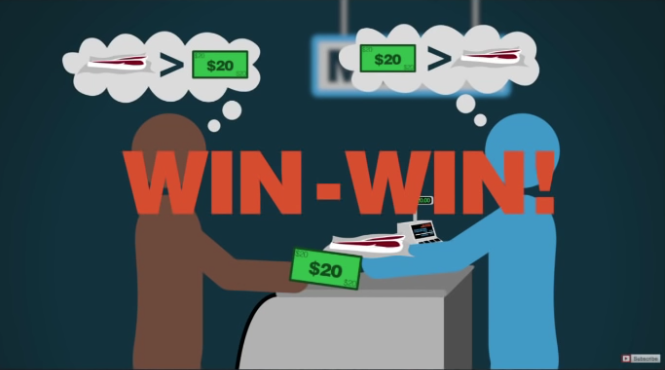 Capitalism, from its values to its faults, doesn’t just end at the point of sale between a shopkeeper and a random consumer. Twitter, Facebook and YouTube aren’t small platforms for people to post random things for a simple fee, but rather near-monopolistic institutions, worth billions in users and buying power, large enough to donate to political campaigns, actively influence public policy, sway elections through search engine manipulation and can police content “in any way they see fit” regardless of free speech values.

This isn’t a bug of unregulated capitalism, but a praised feature.

Instead of acknowledging these problems with the system, where their legitimate grievances of big tech censorship abound, their insight seems to start and end with virtue signalling, like the following tweets posted by Knowles’ conservative colleagues Ben Shapiro, Andrew Klavan and Kassy Dillion, who will condemn the ban as “unAmerican” despite their ideology of enabling such free speech violations in the first place. 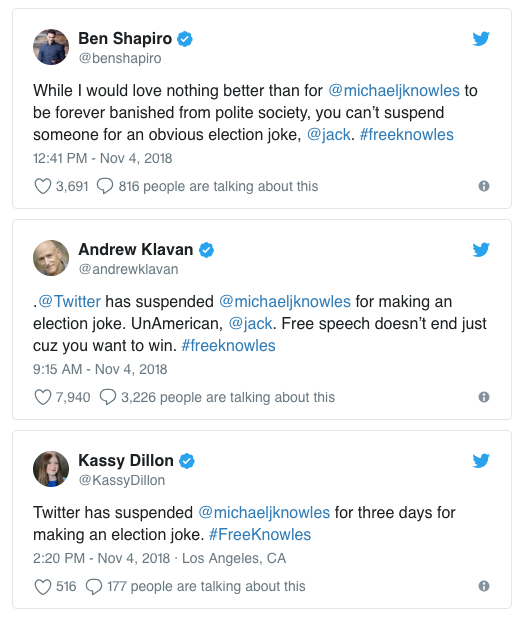 Under their ideology, this system is supposed to be beneficial for everyone, right? Well, it depends who the target is. If we’re talking leftists that are concerned with climate change as a result of big oil, the aforementioned billionaires can just explain away corruption with videos such as “Money in politics? What’s the problem?” and “What is crony capitalism?” where the villain remains only one party — the government taking the money — not the private corporation giving it away in exchange for more deregulatory power. 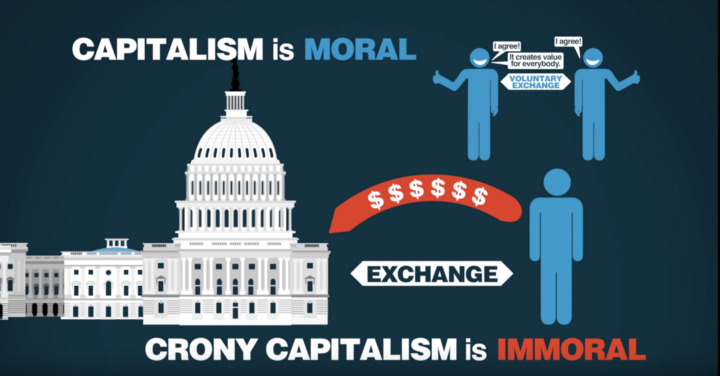 If we’re talking censorship, however, where Silicon Valley can pay politicians to stop state laws on net neutrality that could disproportionately harm traffic to conservative websites, or where YouTube is left untouched as they continue to selectively demonetize content based on arbitrary rules, suddenly conservatives are left speaking out of both sides of their mouth.

In March, PragerU’s lawsuit against YouTube and Google over their demonetization practices, brought forth on the grounds of protecting online free speech from selective political discrimination, was immediately tossed out of court. U.S. District Court Judge Lucy Koh wrote in her decision the channel had “failed to demonstrate that age restrictions imposed on the company’s videos are a First Amendment violation.” YouTube had easily won.

“PragerU’s videos weren’t excluded from Restricted Mode because of politics or ideology, as we demonstrated in our filings,” a YouTube spokesperson then said in a public statement. “PragerU’s allegations were meritless, both factually and legally, and the court’s ruling vindicates important legal principles that allow us to provide different choices and settings to users.”

“Defendants are private entities who created their own video-sharing social media website and make decisions about whether and how to regulate content that has been uploaded on that website,” Koh wrote, agreeing with their own views that enabled such restrictions to pass.

Such results should force them to reanalyze how their views enable censorship, allowing corporations such as Facebook, Twitter and Google to merely act within their self-interest, to increase their profits and to curate political content in a manner they deem suitable for their financial success, which is what a true free market economy would allow.

To prevent further violations, conservatives can’t look to old constitutional amendments or voluntary, benevolent corporations to be their savior — and they’re starting to realize it.

President Donald Trump, while an extremely divisive figure in politics, recently declared himself to be a “nationalist” during one of his notorious campaign rallies, also issuing warnings to big tech institutions by declaring “I’ve made it clear that we as a country cannot tolerate political censorship, blacklisting, and rigged search results,” making a promise to “look into” these consumer protection laws.

Nothing has come of these laws, of course, but the man speaks the right words that it really doesn’t matter. The New York Times is correct to say this free speech principle doesn’t apply to conservatives when it comes to the NFL, where the government coerced league leaders to penalize players kneeling during the national anthem, though agreement on big tech represents a shift away from blind GDP worship to bipartisan critiques of the system itself, which is a valuable silver lining to Trump’s current style of authoritarianism. The Republican party is united behind the president, according to national polls, but whether they support his establishment governing or populist words will decide how they’ll protect their online liberties.