Once upon a time, the United States believed in a certain code of morals. Regardless of a person's specific beliefs, there was a universal expectation that Americans were to behave according to a particular standard, a standard that ensured prosperity and peace for all.

Edicts like "love thy neighbor" and "do unto others as you would have them do unto you" were commonly known. The test of leadership- real, enduring leadership- was not how charismatic or arresting a personality was, but how strongly their moral compass guided them.

While America protects a person's right to worship however or whomever they choose (or the choice not to worship at all), our historical acknowledgment of Judeo-Christian principles influenced much of our culture and values. Even non-Christians accepted the basics, like honesty, respect for one's elders, and staying true to your principles and beliefs.

Without these kinds of things, a country and society can't really thrive. While we need to embrace the diversity of ideas, a sound foundation of morality and the acknowledgment of a high power are tantamount to Western society. Even if an individual chooses not to believe in God, acceptance of a few universal morals is required. And you cannot escape the reality that the United States was founded by people who believed in the Bible.

For some reason, modern counter-culture and progressivism seems to go hand-in-hand with a lack of religious faith. Maybe it's because liberals, for generations, tried to shirk traditions they considered shackles on their lifestyles. They didn't hate all spirituality though, just the kind that required commitment to a moral framework.

During the 1960's and 70's, you saw the counter-culture movement shy away from the church, God, and the Bible- common staples of American ways of life- yet they embraced whole-heartedly the mystic practices of Eastern religions. Was it because these ways were somehow better, or because they were just different from the values of their parents?

Regardless, it seems like that generation, while rejecting the moral foundations of their forefathers, still held to a vague sense of right and wrong. Free love gets you some goodness, at least for a little while (I certainly wouldn't have wanted to hang around the hippies once that Summer of Love vibe ended and the Charles Mansons took over). But today, thanks to the poor precedent set by their parents, modern progressives seem to lack even this basic sense of morality.

I grew up in the 90's, and it was clear that popular culture, media, and all forms of entertainment were promoting a generally amoral lifestyle. While it's true that teenagers especially love to rebel, this vein of godlessness was prevalent throughout all of culture, not just among kids. While in the past it was common to see TV shows where the characters prayed and went to church, that would have been completely alien by the time I came around. 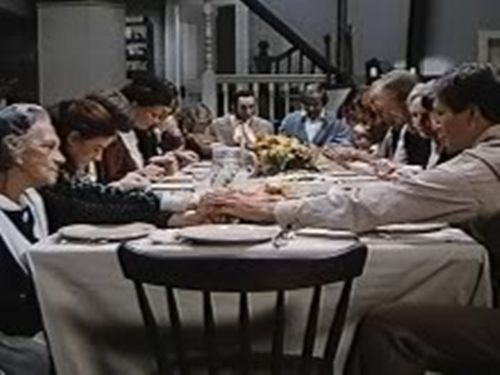 I mean, we had Seventh Heaven, but who was watching that? (And a show like that was particularly rare. When did you ever see Seinfeld or the cast of Friends thank God for their meals?)

Today things are even worse. My generation has grown up without even a basic appreciation for faith, to the point where if someone actually expresses a sincere faith in God or the Bible, they are vilified in pop culture. We've seen countless young pop stars start out claiming to love God, only for the vile cesspool that is the music industry to turn them into spectacles (I can make a list, but it would be too depressing).

It seems our mainstream culture goes out of its way to hunt down and destroy Christians, or anyone that espouses a sincere faith. Not long ago I wrote about how Buzzfeed tried to take down the Gaines family, the hosts of the popular show The Fixer Upper. They tried to slander them because they attend a church that opposes gay marriage.

That one sort of blew up in Buzzfeed's face, something they are quite used to by now. But that does not erase the audacity these liberal writers expressed in penning that article. Think about it: they actually thought they could destroy the careers of a successful husband and wife (not just their TV show, but their construction and design businesses), simply because their church held to the moral teachings of the Bible.

Worse still, Buzzfeed thought that the general public would be on their side, or at least enough modern progressives would be outraged enough that HGTV would pull their show, or a boycott would destroy them. Much like the media did with the bakery who didn't want to make a cake for a gay wedding.

Our society (or at least large parts that control the media) find moral faith so alien, they think it's okay to attack anyone who holds to it. Important institutions that make up our culture- entertainment, journalism, music, publishing- are being run by people so separated from our country's traditions, that they admit they don't even understand religion.

In an interview with WNYC’s “Fresh Air” The New York Times executive editor Dean Baquet admits his newspaper knows nothing about religion or the role it plays in people’s lives...

This admission will come as no surprise to anyone who’s ever attended a church service once in his or her life and read basically anything the NYT has published about religion. The newspaper has a long-running history of really bad screw-ups. For example, the newspaper of record apparently thought Christians think Christ’s body is still buried. (via The Federalist)

Wow. I mean. Really? That's, like, the most basic tenet of the Christian faith: that Christ rose on the third day. For a major newspaper- some consider it the newspaper of the U.S.- to not understand this simple aspect of the most fundamental faith of the country, is a shocking indictment.

That kind of ignorance of one of the major glues that holds this country together could explain the general hostility that liberals show toward Christians and people of faith (unless of course, you're a Sharia-compliant Muslim). Remember, Barack Obama criticized many Americans for clinging to their guns and religion. As if those things are somehow bad.

I'm sorry, how is clinging to religion a bad thing? Remember, this was our president for eight years. A man who claimed to be a Christian. Yet when it comes to his personal views, he looked down on Americans who "clung" to religion.

What else is there to cling to, that really matters in life? Money? Politics? Philosophy? You can fill your head with as much philosophy and rhetoric as you like, it won't help you put your head on that pillow. Clinging to family and friends can fill a part of that void, but even the best of us can let others down. The fact that there are many Americans who look to God for guidance and support should be an inspiration to our leaders and media, not a detriment.

While you can argue over whether or not President Donald Trump has a sincere faith in God, he's made it clear in the past how much he respects the people of faith of this country. Even still, his Vice President, Mike Pence, is a devout Christian, whose faith dictates much of his life.

In our morally bankrupt age, there are people out there who use this fact as a way to tear the man down.

The Washington Post wrote a lengthy article on Vice President Mike Pence’s wife, Karen Pence, from which came this YUGE! revelation by the author:

Mike Pence never dines alone w a woman not his wife, nor does he attends events w alcohol, w/o her by his side. https://t.co/BxfS0JzbAc

...The whole point of the profile is to show that Karen Pence is the Christian woman behind the curtain controlling Mike Pence. (via The Right Scoop)

Users on Twitter lashed out over the article, criticizing the very common sense decisions Pence makes to ensure he lives above reproach.

To me this implies he'd run off with another woman after sniff of the barmaid's apron https://t.co/r688mzfzR3

Once, it was expected that leaders lived by a higher standard. They understood that their behavior set the bar for those that followed them or served under them, therefore they had to live in such a way that no one could bring a rebuke against them. For as it says in the Bible, "You know that we who teach will be judged more strictly" (James 3:1). Clearly, Vice President Pence has put certain limits on his behavior so that not even the rumor of infidelity would reach him.

Our society is so backwards, that to some, this seems like a bad thing. That Mike Pence should be looked down on because he does not want to drink or spend time with a woman alone who is not his wife is almost unbelievable. Gee, I wonder why a public official would want to avoid rumors of adultery? Perhaps it's because we had a president that disgraced our entire country when he had an affair with an intern?

But for liberals, Bill Clinton is a respected hero, and someone like Mike Pence deserves ridicule.

It's even more troubling when you consider the left's consistent defense of the religion of Islam. While there are many decent, moderate Muslims in America (I'm related to some of them), we can't ignore the large contingent around the world that prescribe to a very hostile and oppressive faith. Yet liberals want to defend this group's right to practice their religion, even their head coverings, to the point of protesting with them in the streets.

Isn't that a bit strange? Secular liberals- who are quick to denigrate Christianity and Judaism- rally to defend a religion that in many ways is alien to their own lives? Perhaps this is the worst result of religious bankruptcy: being unable to recognize an ideological threat to your own existence.  Progressives are so quick to defend those they perceive to be victims, they can't see their own hypocrisy.

I would be remiss not to mention the many people who applauded Mike Pence for his faith and diligent behavior. Many spoke out that his actions would not only lead to a good marriage, but ensure the safety and security of both husband and wife. They applauded his commitment not only to his wife, but to his faith.

And that's the paradox we're faced with in modern America. While millions of citizens adhere to a religious faith (not just Christianity), our pop culture and media does everything it can to distance themselves from God. The basic, moral principles of fidelity, chastity, honesty, and integrity take a back seat to violence, sexual indulgence, and every vice you can stuff into a TV show.

Soon we'll be at a breaking point, where the vehemence of the anti-religious left will be completely incompatible with the convictions of many Americans. Maybe we're already seeing that; perhaps the ongoing death of the media is partly caused by this divide. But it will grow ever-wider, and those who oppose the very basics of moral faith will be forced to acknowledge one simple reality:

God's not dead in America.