From “alternative facts” to an illiterate education nominee, it’s been an interesting 72 hours full of a phantasmagoria of developments that have shocked, awed, and embarrassed Americans and global onlookers. This could be part of a strategy to overwhelm the media with ridiculousness to distract from coverage on policy, or perhaps bring about so many scandals that Trump’s behavior becomes the new norm, but only time will tell whether this will hold true.

Despite Trump’s claim that his inauguration would have “unbelievable, perhaps record-setting turnout,” this was quickly disputed by photos that surfaced as events unfolded. Images comparing Trump’s inauguration crowds with Barak Obama’s in 2009 started circulating, especially after NPR released side-by-side comparisons of aerial shots of the same area. Of course, for someone preoccupied with sizes, Trump would not stand for this and pulled out his old “fake news” defense to make himself feel better.

“I’m like, wait a minute. I made a speech. I looked out, the field was, it looked like a million, a million and a half people,” Trump said on Saturday at a speech he gave at CIA Headquarters. According to Trump, an unnamed television network estimated a turnout of 250,000 people. “Now, that’s not bad. But It’s a lie. We had 250,000 people literally around in the little ball we constructed.” In other words, 250,000 people have been given tickets to the swearing-in ceremony. “The rest of the 20-block area, all the way back to the Washington monument was packed,” according to Trump.

To be fair, Trump may not have intentionally been lying. His vantage point offered him this view: 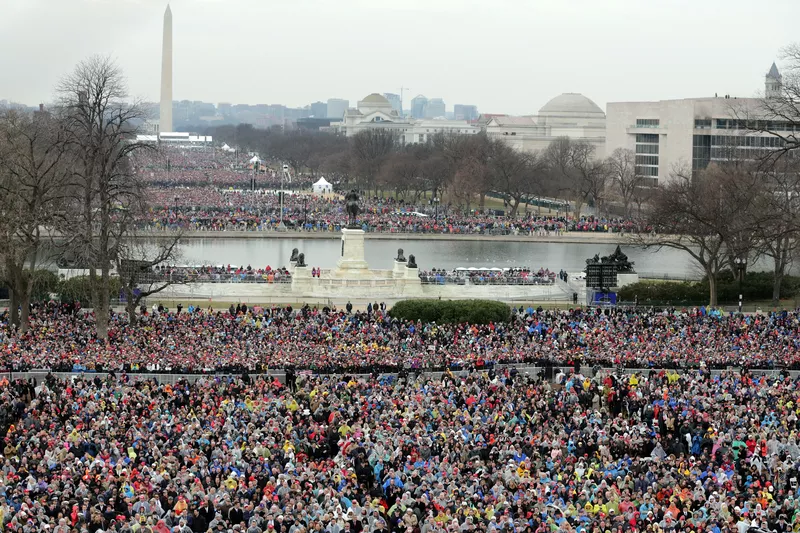 Whereas the National Park Earthcam recorded this: 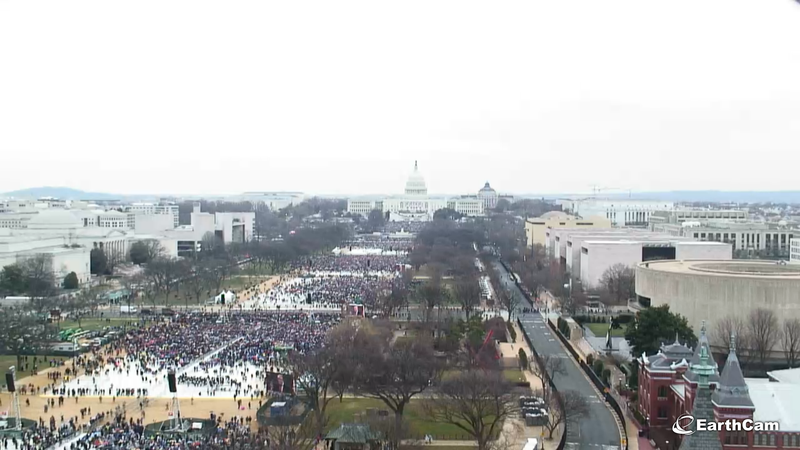 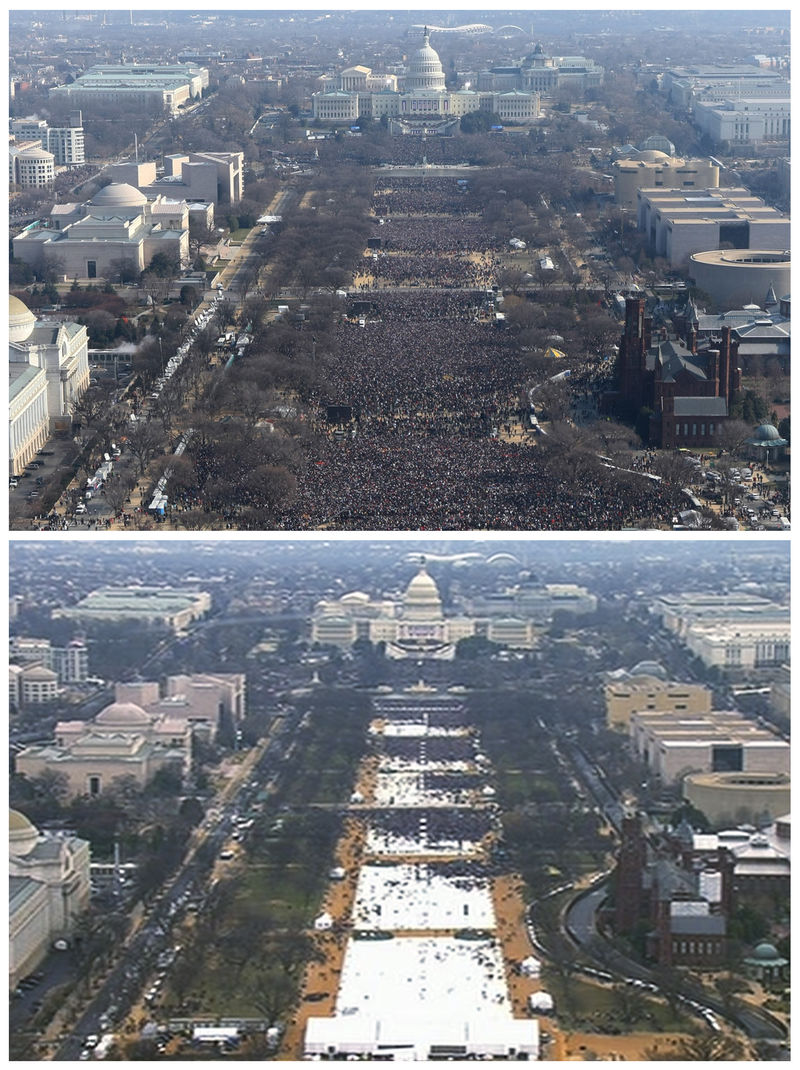 It’s the continuation of the lie that’s irksome. New White House press secretary, Sean Spicer, chose to give an angry lecture to the media from the press briefing room regarding the inauguration crowds- then promptly left without taking any questions. Great first official briefing, considering Spicer stated that, “This was the largest audience to ever witness an inauguration, period.” Spicer went on to make more false claims, such as citing inaccurate DC Metro rider numbers, floor coverings, and the use of fencing and magnetometers to the National Mall. I suppose it shouldn’t be a surprise that the Trump camp will continue to deny facts, so let’s move onto more pressing matters, such as Spicer describing Enrique Peña Nieto as the “prime minister” of Mexico, when in fact, he is that nation’s president. The briefing was akin to a car accident; no wonder CNN decided not to broadcast the briefing live. I’m far from a fan of CNN, but kudos to them for shielding people from the blatant lies Spicer was spouting; they instead ran a fact check on his statements and a full breakdown analysis afterward. Conservative Bill Kristol tweeted in response to Spicer: “It is embarrassing, as an American, to watch this briefing by Sean Spicer from the podium at the White House. Not the RNC. The White House.” It only got worse when Kellyanne Conway defended Spicer by telling reporters that “Sean Spicer, our press secretary, gave alternative facts.”

Alternative facts may very well be the entire basis the Trump administration is run on.

“For too long, we’ve been held back by burdensome regulations on our energy industry. President Trump is committed to eliminating harmful and unnecessary policies such as the Climate Action Plan and the Waters of the U.S. rule. Lifting these restrictions will greatly help American workers, increasing wages by more than $30 billion over the next 7 years…

The Trump Administration will embrace the shale oil and gas revolution to bring jobs and prosperity to millions of Americans. We must take advantage of the estimated $50 trillion in untapped shale, oil, and natural gas reserves, especially those on federal lands that the American people own.”

It’s not like 2016 was the warmest year on record or anything, or that of the hottest 17 years recorded, 16 of them have occurred since 2000. Oh wait. Perhaps we should forget that we are experiencing the sixth mass extinction event in 3.8 billion years with the ongoing Holocene extinction, or that a new scientific study confirmed that 60% percent of all primates are at risk of extinction, or that the global population of wild vertebrates (that’s mammals, birds, reptiles, fish, and amphibians) has declined by 58% percent, which can be linked to climate change. But that’s okay, because Trump’s plan seems to ignore climate change and focus on his energy plan. The site claims that the revenue from American energy production will in part be funneled back into schools.

That’s largely unhelpful though, considering that Trump’s cabinet seems to be mainly composed of anti-science, climate-denying, evolution-rejecting anti-intellectuals. Betsy DeVos, Trump’s nominee to head the Department of Education, became an even bigger laughingstock this weekend after her inauguration tweet was picked apart by anyone who passed school using their own skills and not money. It led to global mockery, especially after DeVos tweeted out a corrected version with additional mistakes. Considering that Trump can’t even spell ‘honored’ correctly and may have violated the Presidential Records Act in deleting his tweet’s spelling error, I’m justifiably horrified at what will happen to our education system in the coming years.

Unfortunately, things didn’t stop at these sad mistakes. In its first 48 hours, the Trump administration:

It’s been a busy couple of days for the new administration that proves the rhetoric and fact-denying from the campaign will continue in the White House. Rumor has it that today Trump will sign an executive action to withdraw the US from the Trans-Pacific Partnership deal (TPP) as well, so Trump apparently remembers some of what he said he would do. But I find myself hoping this term that a politician does break his campaign promises- for the good of the country, and protection of its population. If Trump follows through on his divisive and offensive promises, I’m not sure even an impeachment could undo the chaos he could cause.