I take public transit to work. Although I often grumble about the crowds or weather delays, it’s nice to know I’m doing a small part to try and cut down on greenhouse gasses. But along the same street, there are two additional bus routes that go directly to the university further up the street. For some reason, these pass by every 5 minutes, while I’m stuck waiting 15-20 minutes for mine. Sidenote: those buses typically only have half a dozen students on them. I can’t take those buses since I have to continue on, and many others can’t either, so the bus I take is normally packed. Unfortunately, there inevitably ends up being one or two idiotic people who, instead of taking one of the 8 other buses that have passed by during our wait time, make an incredibly busy bus stop in front of the university just for them.

I get really angry at these people. There are literally TWO separate routes to the university that get their own buses every 5 minutes, and yet you’re forcing the one bus that’s full to bursting- no seriously, sometimes I have to squeeze on through the back door- to stop in front of the university. Just for you. Talk about inconsiderate and self-centred.

Remember former Justice Antonin Scalia? His death was almost a year ago, but it was almost completely upstaged by what came next. You know, when then President Obama went to nominate his pick to end the 4-4 deadlock in the Supreme Court, and Republicans pulled one of the most ridiculous moves by refusing Obama’s pick. That’s right, they *gasp* protested against this right of the President.

Isn’t it funny how there’s no problem with protest when the Republicans are doing it? Of course, as previously covered by us, Republicans claimed that their no-nomination position was justified: Marco Rubio and Ted Cruz stated that their decision was based on “80 years of precedent,” that presidents should abstain from nominating anyone to the Supreme Court in an election year. Too bad that was a lie, especially as Republicans banded together within minutes of Scalia’s death for their position. While notable people were still offering their condolences to Scalia’s family and friends, Republicans instead discussed and then released their position on how to use this death to further their agenda. Yup, it’s exactly as distasteful as it sounds. I suppose though, considering that McConnell’s main political goal was not to govern or help the American people, but to block Obama, this isn’t that much of a shock. Given that the Republicans were blatantly ignoring the fact that numerous justices have been nominated by presidents, and confirmed by Senates, in election years, it’s pretty outrageous that people let them do this.

It was during Obama’s presidency that Scalia passed away, and it should have been his position to fill. Instead, Republicans cited an invented principle composed of tortured logic and disingenuous lies to steal a Supreme Court nominee. That’s right, steal. And last night, President Trump announced their his pick for the highest court in our nation.

Am I angry? You’re damn right. And any American who respects our judicial system should be too. And here’s what we should be pressuring our representatives to do, and what all Democrats should be doing.

Say no. There should not be a single goddamn vote for Trump’s nominee. Not. A. Single. One.

By all accounts, Neil Gorsuch is a fairly mainstream conservative. But after a year of Republican obstruction (and longer, when considering other moves the GOP pulled against Obama), it’s time for the Democrats to stop playing nice. Just stop playing.

Trump’s ridiculous reality-tv show style reveal last night was almost vomit-worthy. After inviting Gorsuch and the other finalist, Third Circuit Judge Thomas Hardiman, to both come to Washington, Trump apparently fancied himself a character on the Bachelor.

Of all Trump’s potentials, Gorsuch is the one whose ideology aligns mostly with that of the late Justice Antonin Scalia. Gorsuch has frequently expressed admiration for Scalia, and admitted to the public that he cried when learning of Scalia’s death. He’s basically a Scalia clone, strongly believing in originalism- the idea that the Constitution’s meaning has not changed since its enactment centuries ago. His anti-euthanasia and end-of-life issues stance will resonate with the conservative masses, and it’s only a short leap to assume he’ll be part of the pro-life movement. Gorsuch has perfect credentials as well: Columbia undergrad, a doctorate in legal philosophy as a Marshall Scholar at Oxford University, Harvard Law, clerk for two Supreme Court justices, and has been a federal judge for years.

Hailing from Colorado, he’s from a state that matters. Trump almost won that key swing state, and Trump may be counting on Democratic US Senator Michael Bennett from Colorado to support Gorsuch’s confirmation because of his positive approvals within the state. At age 49, he’s also one of the youngest nominees to the Supreme Court in history. He will have a long tenure ahead of him to further conservative agendas.

Yes, I’m acknowledging that he will most likely be confirmed. He’ll fill that vacancy on the Supreme Court. Although Senate Minority Leader Chuck Schumer can choose how far he’s willing to go to block this nomination, early reports state the Senate Republicans are considering the use the ‘nuclear option’ to confirm Gorsuch with a simple majority vote in the Senate. But this should not be an issue that the Democrats fold on. What Schumer and his fellow Democrats should be doing is raising a shit ton of noise and expending some considerable ammunition opposing this.

The Republicans so conveniently ignore the Constitution when it suits their goals, with most GOP senators refusing to meet with Obama’s nominee. They even made the unprecedented move to not even hold hearings on his nomination. Yet now that the tables have turned, the GOP is absolutely horrified at the possibility of Democrats rejecting any of Trump’s picks, Supreme Court or otherwise. 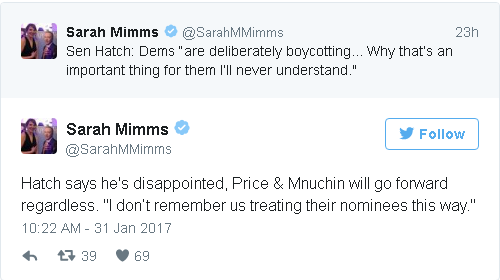 How very short their memories are. Pennsylvania Senator Pat Tomey even went so far as to say: “We did not inflict this kind of obstructionism on President Obama.” He added that the Democrats were committing “a completely unprecedented level of obstruction. This is not what the American people expect of the United States Senate.”  Of course, we can’t forget the constantly lying White House Press Secretary and the President himself:

Spicer went on to tell reporters that, before the Democrats “even heard who this individual is, you’ve got some of them saying, ‘Absolutely no.’ I mean, that just shows you that it’s all about politics, it’s not about qualification.” Trump even had the audacity to say he “hope[s] that the Democrats and Republicans can come together for once for the good of the country.”

Talk about being full of shit. Under the Constitution, this nomination belonged to President Obama, and they hijacked it in a power move that ended up working out for them. For the GOP to become self-righteous and attempt to shame the other side’s to play the same game they did.

Democrats don’t like thinking of and displaying themselves as obstructionists, but things need to change. They can’t continue to let the Constitution-shredding madman continue to operate unchecked. I’m not saying that Gorsuch and the Supreme Court nominee should be the hill they die on, but Democrats need to demonstrate that they will not let Trump and his administration continue their policy atrocities. Don’t concede the next two years.

This would be inexcusably wrong. I will acknowledge that. Stooping to the Republicans’ level of obstruction leaves an awful taste in our mouths. But the Democrats should staunchly refuse to meet or vote for Gorsuch until their demands are met. What they should fight for are Constitutional amendments.

If the past few months- and especially the last week or so- have demonstrated, there are certain ideas we have of how our President and government should behave, but these are not actually set in law. These are not set in the Constitution, and it’s about time that they were. Set a time period for Supreme Court nominations; there should be a deadline. Why should hearings for cabinet nominees commence without properly being vetted with an ethics review? Why isn’t the President subjected to an ethics review? Clearly define what a conflict of interest is, so even uneducated dimwits can understand what they entail. Make it clear that someone should not, and can not, be using the presidency of our country to make a profit for themselves and their families. And hell, make it unconstitutional to do exactly what I’m saying they should do. I wholeheartedly support the upcoming filibuster. This needs to happen.

Respect the presidency. Close those legal loopholes. Fight the dangerously out-of-control administration that seems to single-handedly want to destroy other branches of government and seize all control. This is about rejecting the idea that a political party can cheerfully garrote longstanding political norms in broad daylight, and expect the American public to go quietly along while they destroy the hard-earned democracy we pride ourselves on. We need to before it’s too late.