Depending on your news outlet of preference, yesterday’s Senate Judiciary Committee hearing of Christopher Wray, Donald Trump’s appointee as director of the FBI, was many different things.

If you read the Washington Examiner or watch Fox News, you likely have heard that Wray is a man who commands the highest level of respect in legal as well as political circles, with experience and accolades to match the magnitude of his prospective position atop the FBI.

If you are more inclined to keep Politico in your Chrome bookmarks tab or still subscribe to the New York Times, you likely put more stock in Wray’s vow to remain independent when it comes to investigations involving the ongoing Russia saga.

Regardless of the outlet, you probably heard mostly good things. But in politics, a positive consensus tends not to last very long, and a clearer picture of how FBI director Chris Wray will be assessed going forward requires a shifting lens, one that views complex issues from both the left and the right.

The Facts About Wray

Some things cannot be disputed, even in American politics circa 2017. As it pertains to Christopher Wray, nobody is calling into question the fact that he was born on December 17, 1966, in New York City, the son of a prominent lawyer named Cecil Wray.

Notably, Wray was nominated in 2003 as Assistant Attorney General in charge of the Justice Department’s Criminal Division, having joined the DOJ in 2001 as Associate Deputy Attorney General. Wray then served until 2005 as a subordinate to James Comey, then Deputy AG.

According to the Justice Department, Wray specializes in white collar law, including but not limited to fraud. A master of internal investigations, Wray was on the task force that ultimately recommended criminal charges for prominent members of natural gas seller Enron in the mid-2000s.

In 2005 Wray joined private law firm King & Spalding, where he has worked since, taking on clients in the private and public sectors, both international and domestic.

The Left Will Love: Wray’s Comments About Russia, Remaining Objective

By all accounts, Wray was nothing short of impressive in his hearing before the Senate Judiciary Committee Wednesday. He gave answers that were measured, yet reassuring in their conviction when delivered.

Even when run through what has become the routine, self-righteous morality-test questionnaire delivered by overpaid partisan stalwarts, Wray emerged unscathed, allaying ersatz skepticism with persistent charm and unquestionable rationale.

No Senate Judiciary Committee vetting would be complete without the resident sheriff of Affairs Pertaining to Putin, California Sen. Dianne Feinstein, thoroughly questioning Wray’s ability to do his job objectively.

That was not the only answer Wray gave, seemingly genuinely, that typified what members on both sides of the aisle hoped to hear:

“I will not allow the FBI’s work to be driven by anything other than the facts, the law, and the impartial pursuit of justice, period.”

“I believe to my core that there is only one right way to do this job. And that is with strict independence, by the book, playing it straight, faithful to the Constitution, faithful to our laws, and faithful to the best practices of the institution, without fear, without favoritism, and certainly without regard to any partisan political influence.”

“My loyalty is to the Constitution and to the rule of law. Those have been my guideposts throughout my career, and I will continue to adhere to them, no matter the test.”

Wray also mentioned that he would not characterize the investigation as a “witch-hunt,” though this virtually meaningless answer is the result of insignificant lime-lighting by the typically chatty Lindsay Graham.

Depending on how you view the Russia-Trump narrative, these comments, and Wray’s seeming commitment to remaining independent, may exhilarate or frighten you. Whether myth or well-cleansed cover-up, by his comments Wray appears to be the man that may lay the narrative to rest, for better or worse.

As a member of the Department of Justice, Wray received a swift promotion from President George W. Bush, becoming an integral part of legal matters at the height of American’s recent involvement in the Middle East. Some would say that a certain allegiance may be borne of such circumstances.

As a lawyer in the private sector, Wray consistently represented members of big business, the same sectors of industry that are frequently demonized as bastions of conservative greed. Some would say that the tasks inherent to being a top-flight lawyer for such firms and individuals may garner a certain level of empathy.

And, Wray’s acceptance of New Jersey Gov. Chris Christie’s request that he represent him in the Bridgegate scandal, successfully if possible, would indicate a certain allegiance to the party. He was successful in his defense of Christie, by the way. If only Wray could have represented Christie’s fall-people…

There are no apparent red flags regarding Wray’s potential for corruptibility in favor of the left, which is more than can be said for many supposed independents.

Yet, these links to the right, however tangential or inconsequential, contribute to another predictable development.

The Left Will Love: Built-in Storylines

No matter a man’s charm, appearance of inscrutability, or integrity, his flaws will be exposed, whether perceived or real.

If Jesus couldn’t shake the yellow journalists, neither can Chris Wray.

And you better know that they had their narratives locked and loaded mere hours after catching a whiff of Wray’s appointment, if not minutes: 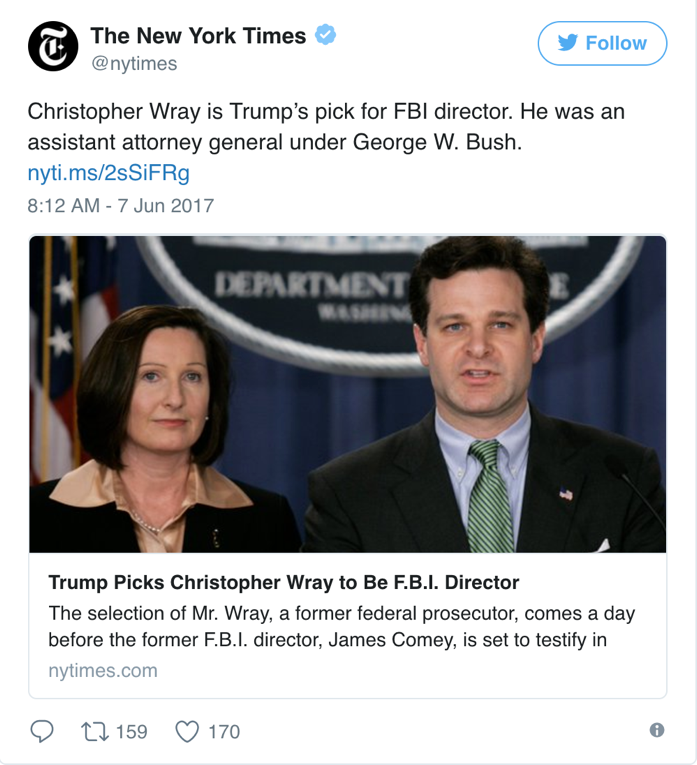 Because, his position under George W. Bush tells one all they need to know in 48 characters, right? 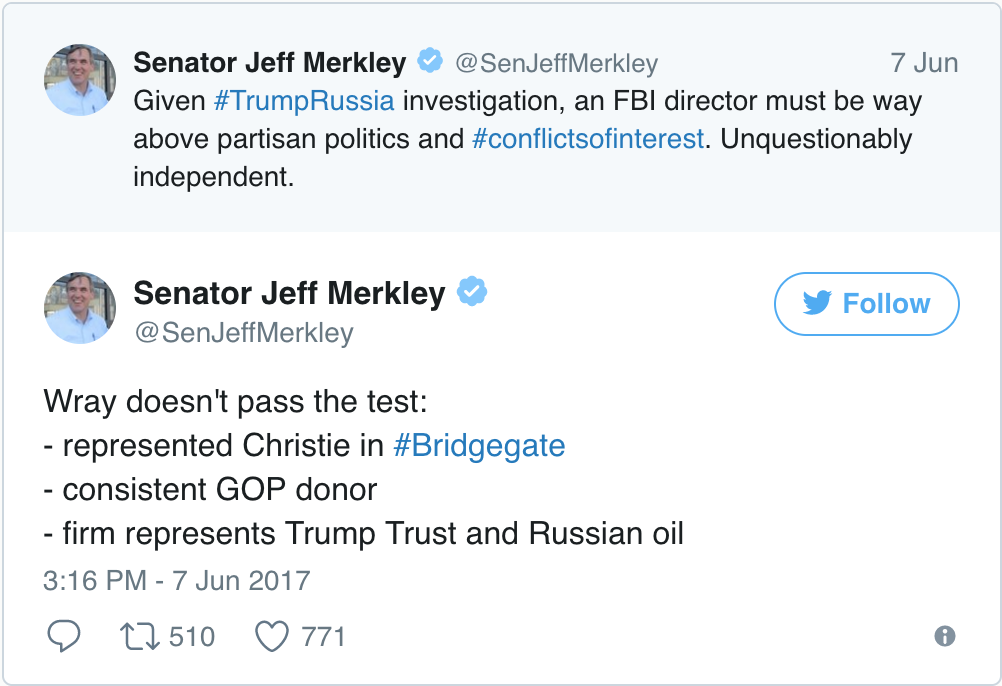 Senator Jeff Merkley: America’s proctor for the #conflictsofinterest test, to be administered via Twitter every time a Republican nominee is appointed. The problem with this test is that a Republican appointee can never pass, no matter what. They’re all trick questions.

Even issues which have been settled, such as the Christe-related cell phone debacle, are being cited as evidence of Wray’s unsuitability:

Unfortunately, there are more compelling narratives that will surely be soon embraced by the left. They include Wray’s law firm's ties to Russian state oil companies Rosneft and Gazprom. Though these ties are completely legal, their ease of incorporation into the left’s pre-existing narrative is a bit concerning to those who see the narrative as dangerous in its potential real-world consequences, even those based on false perception alone.

Connections between Rosneft and Secretary of State Rex Tillerson, CEO of Exxon in 2012, are also readymade to further any anti-Trump narratives tied to Russia. Gazprom’s leadership, who partnered with a Ukrainian currently under federal criminal indictment for racketeering, remains questionable in their decision-making as well.

Two issues pertaining to Wray’s conduct during the Iraq War, torture practices and disclosure of sensitive information attained in interviews to then Attorney General Tom Ashcroft, will also be low-hanging fruit with at least some basis in truth:

‘Wray generated controversy during his time at the Justice Department for briefing then-Attorney General John Ashcroft on FBI interviews with Karl Rove, as independent journalist Marcy Wheeler noted. Ashcroft later recused himself from the investigation.

Wheeler noted that Wray was also “on the border of a lot of torture decisions in 2004,” and that the ACLU’s database of communications about torture include fully redacted emails that Wray sent.’ (Daily Beast)

But none of these issues were enough to block Senator Feinstein’s commitment to affirming Wray’s appointment. He is a lawyer, a damn good one at that, and nobody said he was perfect. These ties, should they be as benign as most believe them to be and should Wray stick to his word in terms of remaining objective and nonpartisan, will prove irrelevant in the grand scheme of Wray’s legacy as FBI director.

The Right Will Love: Wray’s Competence

Say what you will about Christopher Wray’s choice in clients or which candidates he chooses to donate money to, but don’t call Wray bad at his job.

He has never been labeled as incompetent, whether in the private or public sector.

Chris Christie, for all his apparent involvement in Bridgegate, was essentially let off scot-free, thanks in no small part to Wray. He has provided advice to clients such as Johnson & Johnson, Wells Fargo, Chevron, Credit Suisse, and sports gambling company DraftKings. Such clients don’t come to novices for their legal advice, and they don’t spare any expenses when it comes to litigation.

For all of his expertise, competence, and experience, Wray has been paid handsomely. If there’s one thing that conservatives know walks the walk, it is a bankroll. The right is not in the business of vilifying the rich, they are in the business of figuring out how one got rich, and why.

In the case of Christopher Wray, he has been paid because he is very, very good at what he does. And now, he will name the U.S. government as his primary employer. That can be nothing but good news for the American people.

For Wray, he is certainly due for a pay cut. In the Trump cabinet, you will find no shortage of individuals who could be making much more, and stressing much less, in the private sector.

Proof of Wray’s effectiveness as an investigator, litigator, and overall lawyer lies in the numbers:

“Christopher Wray’s law firm has collected $2.1 million from New Jersey taxpayers since being hired by Christie in 2014, including $653,034 for work both during the six-week federal corruption trial and since then, according to bills obtained by the Asbury Park (N.J.) Press under a public records request.”

Considering the hours Wray racked up defending Chris Christie on the taxpayers’ dime, whatever salary he commands from his public service will be considered a bargain for the state:

“Christie said of Wray, who’s getting $340 an hour: "When I had to retain legal counsel during a very, very troubling, confusing, difficult time for me, I made one phone call, and that was to Chris Wray.’’

Don’t feel too badly for Wray in terms of a salary cut. He won’t be sent off with nothing to console him, either:

“When Wray leaves King & Spalding officially upon being confirmed as the new FBI director, he said he will receive the full return of his paid in capital by the end of July — $1.27 million.”

All of this money being thrown around has one common thread: Wray. Conservatives know that getting an $800,000-plus man on a public servant’s salary is no small deal.