If you think that outrage aimed at ESPN is about its employee’s opinion that Donald Trump, his cabinet, and his supporters are white supremacists, you’d likely be wrong. The outrage aimed at ESPN goes far deeper, and dates back much further, than the latest saga illustrating their hypocrisy when it comes to their employees’ political leanings.

There is no doubt that SportsCenter co-host Jemele Hill’s generalizing, inaccurate Twitter rant exposed her as ignorant to facts and racially biased in the extreme: 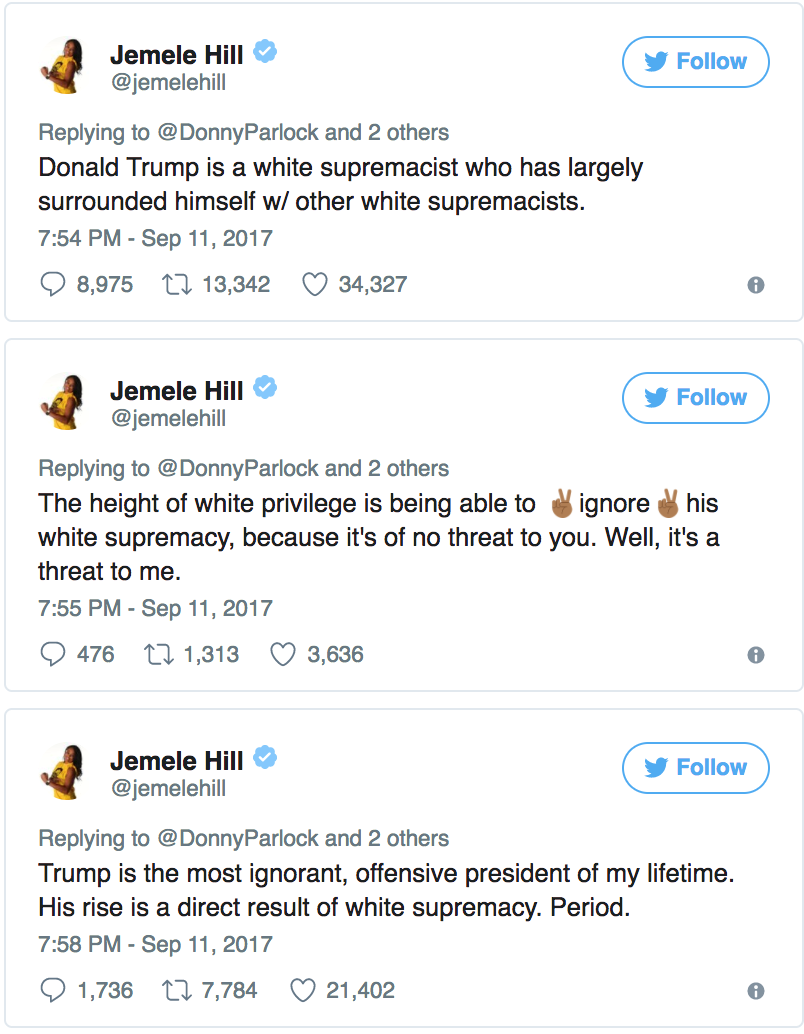 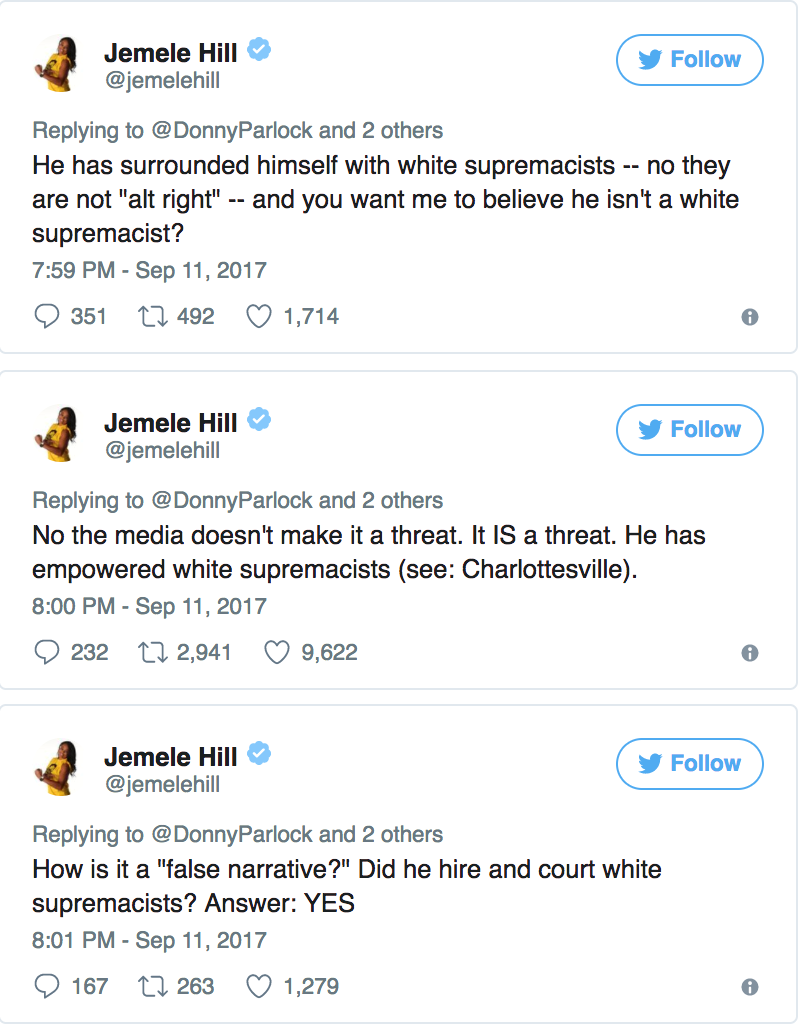 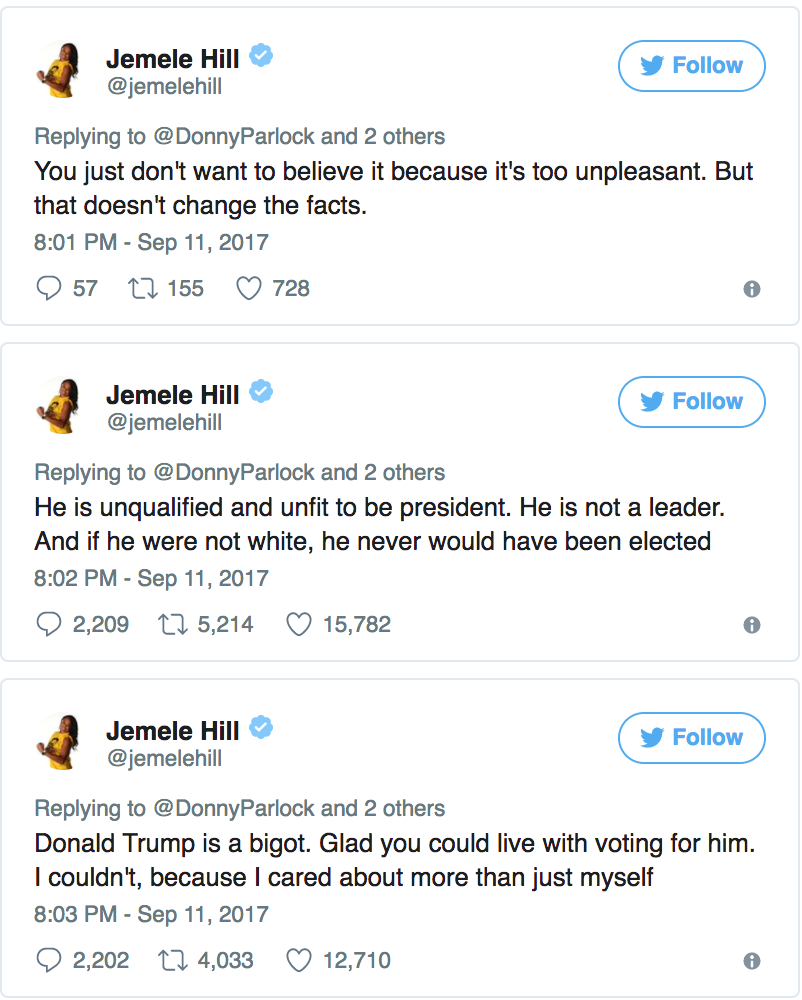 In a matter of 30 minutes, Hill directly accused the president of being a bigot, a white supremacist, unfit to be president, a ‘threat,' ignorant, and offensive. Further, she said that his election was carried out by racists who saw him as some sort of Grand Wizard representative of their quest to restore whites back to power.

Hill, clearly, is an idiot. Her rant comes straight out of the Black Lives Matter book of falsehoods, hyperbole, and slander against whitey. Anybody who was inclined to give a damn about Jemele Hill’s opinion on politics in the first place could be considered woefully misguided. Anybody who continues to give a grain of salt to Hill’s opinions– even when they fall under her supposed area of expertise, which you may need to be reminded is not politics– can be written off, just as Hill has been. Idiots abound, a fact that social media, internet columns, and comment sections have made abundantly clear. Their prevalence in the field of television media is particularly concentrated. Those who are familiar with Hill’s past displays of race-based ignorance should have been particularly unsurprised by this rant.

She has tweeted other anti-American nonsense with impunity before: 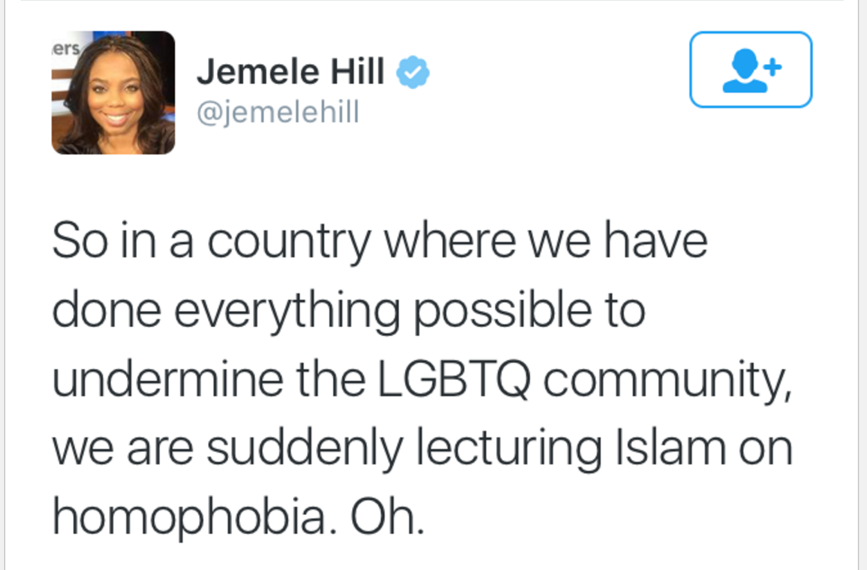 But part of what makes ESPN’s decision not to hand out any form of punishment to Hill as a result of her latest outburst is that she has been suspended in the past under similar circumstances.

In 2008, Hill wrote a column that contained this gem of insight:

"rooting for the Celtics is like saying Hitler was a victim.  It’s like hoping Gorbachev would get to the blinking red button before Reagan."

You could argue that Jemele Hill– a Detroit Pistons fan exemplifying the city’s long-held image of tolerance and racial accord– was merely attempting to maximize the image of this rival team as one to be loathed. But one cannot ignore that the Celtics, and the city of Boston as a whole, are synonymous with whiteness. In light of her most recent tirade, it’s tough to give Hill any benefit of the doubt. One can now assume that her vilification of the Celtics is driven on some level by racism and contempt for the city’s identity.

Based on her characterization of Donald Trump and his supporters, she likely sees Boston as a modern-day Wolf’s Lair.

This past transgression, and the consequences that followed, help to partially inform the reason why so many are upset that Hill has not received so much as a slap on the wrist from her employer this time around. Hill was suspended in the wake of her Boston comments, which many see as far less incendiary than the allegations levied against the President and his supporters. The specificity of her latest rant matters nearly as much as its falsehoods.

Hill has not issued an apology to the President or his supporters, the least that is expected of most public figures for saying things far less offensive and far less slanderous. ESPN claims that Hill apologized to them, and that is apparently enough for them not to suspend her. Enough, it seems, that ESPN did not even demand a public apology which, for many, is a condition without which they would not be allowed to keep their job. The criteria for what warrants an apology these days is broader than ever, and people have been suspended and fired for far, far less.

In fact, ESPN has suspended its own employees for far less. It suspended legendary anchor Linda Cohn, one of the few remaining familiar faces after the network’s latest round of job cuts, for saying this:

“I felt that the old school viewers were put in a corner and not appreciated with all these other changes,” she explained. “And they forgot their core. You can never forget your core and be grateful for your core group.”

When she was asked if it was due to ESPN’s liberal lean, she said, “That is definitely a percentage of it. I don’t know how big a percentage, but if anyone wants to ignore that fact, they’re blind.”

Cohn was suspended for giving an honest opinion. And, an opinion that many longtime sports fans who grew up watching ESPN share. But ESPN, who commissioned their own study that concluded ‘64% of viewers agree with their sports-politics mix’ persists in their tone-deafness.

Do they not understand that punishing anchors who criticize ESPN’s embrace of increasingly opinionated– but only if they share left-leaning opinions– employees, while letting said employees (see: Hill, Jemele) off the hook when they slander the entire right-leaning segment of America, is exactly why people see them as politically biased?

ESPN has not stopped at suspension when an employee speaks their mind in a way that does not mesh with ESPN leadership’s crystal-clear ideology. Notably and non-coincidentally, right-leaning, likely-Hall of Fame pitcher Curt Schilling was fired when he re-tweeted a meme that contained this factual statement:

He was fired! Paycheck gone, job lost, family cast into uncertainty. All because Schilling had the audacity to point out a fact about extremist Muslims, a sentiment that is relevant, accurate, and shared by many. He didn’t criticize or generalize about all Muslims, either. Quite the opposite, the relative scarcity of extremism was part of his point. Nuance and context are often lost on the modern ‘progressive,' as evidenced by Schilling’s termination.

Yet ESPN continues to feign bewilderment as to why conservatives and non-left leaning Americans see them as politically biased and frankly, unwatchable. All we want is sports highlights, but instead, we are treated to the political opinions of its employees on a regular basis. The outrage that arose from the network’s awarding of their annual ‘Courage Award’ to Caitlyn Jenner instead of Lauryn Hill, a young lady who continued to play college basketball despite facing an inoperable form of brain cancer, has continued.

And it is ESPN’s fault for, time and again, confirming that they extend different rights to employees depending on their viewpoints. Linda Cohn and Curt Schilling speak their mind, espousing opinions that aligned with right-leaning America. They were suspended and fired, respectively.

Jemele Hill literally called the President and his supporters white supremacists, and it was not her first brush with politically and racially incendiary controversy. All she had to do was issue a non-public apology, and all was forgotten.

And that is why ESPN is facing such outrage from people who could give a damn about Jemele Hill’s idiotic opinion. It is selective censorship, and it typifies the trend most Americans see enveloping the nation’s universities, media outlets, and the public’s overall mindset. As an avid sports fan, aside from live sporting events, ESPN’s popularity among fellow sports fans who see athletics as an escape from political BS has run dry. The statistics support this perception, as the network continues to lose subscribers steadily. ESPN used to be a reason to hang onto cable subscriptions with diminishing overall returns. Now, it has become one more reason to drop them.

Jemele Hill was recently made one-half of ESPN’s re-branding of SportsCenter, its flagship show. The network trotted out two black anchors with relatively little cache, rebranding the show as SC6, a Hillary Clinton-esque attempt at seeming ‘cool.' This surely has something to do with their lenient treatment of Hill. History tells us, though, that the network’s long-apparent political agenda is the greater reason for the disproportionate punishment of its employees.

ESPN, and their parent company Disney, axed many of the faces that helped build ESPN into the massive brand which the network itself is currently working its ass off to tarnish. Yet, it retains seeming droves of (notably minority) employees who are, quite simply, not as good at their jobs as those being fired. It has absolutely nothing to do with their minority status, it has to do with talent and experience. It is nearly impossible to point to valid reasons why younger, often awkward employees are thrown in front of the camera as the primarily white, older generation of ESPN anchors are let go.

At this point, it is fair to chalk it up to wrongheaded attempts at establishing ‘diversity.' It is the same reason a notable black employee has escaped even a forced public apology to the people she accused of Klan-like beliefs and motives. Diversity and the lengths which so many will go to pretend it has inherent value has become a form of minority privilege. In the case of Hill, call it what it is: black privilege.

It seems tired, but imagine the scenario was reversed. Imagine that Linda Cohn had accused Barack Obama of being an incompetent, white-hating black supremacist who posed a direct threat to white people everywhere. It is a completely fair comparison, and we all know how it would have ended.

Cohn would not only be fired from ESPN, she would be blackballed from the entire industry. But Hill is black, so she will get away with her racist, baseless, and slanderous comments that do not represent the views of many black people, as Hill likely thinks.

Just as ESPN does not reflect the views of the average American, and definitely not the average sports fan, Hill’s opinion holds little water outside of BLM-like circles. Just as ESPN has, Hill has likely dug a professional grave outside of the audience that agrees with her extremist view of white Americans. And, they brought it all on themselves.