Does Diversity Sell? Not If You Force It

What is diversity, really? And does it matter in our society?

Yeah, that sounds like the intro to some kind of terrible informational training video by a third-rate company. But in an era where everyone from politicians to food makers are crying out for more diversity, it's something we should really think about.

Diversity, broadly speaking, is the effort to make sure everyone is properly represented in our society. Society can be broken down into many subgroups: the workplace, entertainment, politics, military, etc. Traditionally, a "diverse" workplace meant making sure people of different races had an equal shake at getting a good job.

But, as is common with progressives, this idea mutated into something that actually harms people, rather than helps them. Diversity wasn't just about making sure black people weren't discriminated against in education and work (as was the original intent), but it seems that now every subgroup and micro-fraction of our culture needs to have equal representation in our country. A transgender, bi-polar, Eskimo owlkin should have just as much representation in our culture as a normal person. This, despite the fact that there is no such thing as a transgender, bi-polar, Eskimo owlkin.

A concept meant to protect against oppression has been co-opted to artificially control who and how we are seen in our culture. I mean, in a country that's 77% white, we are told we are evil if we don't have "enough" of other races in our offices, movies, and other facets of society. And I did not make up that number, according to the U.S. Census Bureau, 77% of Americans are white, 13.3% of Americans are black, and 17.6% of Americans are considered Hispanic. And the numbers drop rapidly with other races.

Those are the facts. They are neither good or bad. But the idea of providing a "diverse" spectrum in our society suddenly becomes an uphill battle, considering just how much of our population isn't "diverse."

It becomes even worse when you consider diversity is often used as a political tool. Activist groups and political parties use the concept of diversity- or the lack thereof- as a weapon to push for their ends. It's very easy to make a company, school, or form of media look anti-diverse; just say there are not enough black/Hispanic/gay people represented and you can taint them. Forgetting the fact that the numbers will always be against this nebulous goal of diversity, biased activists will always make people look bad for being "too" white or not having enough of other kinds of people in the mix.

This has led to a kind of artificial approach at securing diversity. There are numerous laws that are meant to protect minorities, women, and homosexuals in the workplace. Often these are abused to seemingly give certain groups greater advantages. You can try to argue that these are simply meant to "correct" years of advantages that white men have enjoyed, but the results are still the same.

Companies are often forced to meet certain diversity "quotas," being forced to hire someone simply because of their race, rather than their qualification (which, no matter how you slice it, is wrong). Some companies even prioritize minorities from the start, preferring to higher non-white people. I worked for one of these companies, which- had they met me in person first- probably never would have hired me. The only reason they responded to my resume was because there was a vowel at the end of my name.

But do these obvious biases in our workplaces actually do any harm? Is pushing for diversity really a bad thing, after all? Even if we tip the scales to favor minorities, isn't that just correcting decades (perhaps centuries) in which these folk have suffered under the evils of white oppression?

Of course not. Equality is more important that diversity. And providing a level playing field for everyone is better than giving a single group- no matter how small- an advantage.

Yet many of our corporations and companies in America- driven by empty-headed liberal CEO's- push to present themselves as diverse in an effort to soften their image. While CEO's in America are mostly white (with white women trending very well over the last decade), these companies have no problem pandering to customers with images of happy, diverse groups of people who enjoy their products.

Because they're not diverse where it counts (at the top), just where it looks good (in ads).

I don't have to show you one of the many, gut-turning Google ads to prove this, but I will:

Ah, yes. Be together, not the same. These kinds of messages are meant to give you a warm feeling, yet they often leave you feeling a little... weird.

We should love these kinds of messages, right? I mean they even had women in hijabs and everything! Google is so fucking diverse, we should just drop everything we're doing and buy as many god-damn Android phones as we can afford!!!

And that's where we enter problems. Does a massive company, that is making and wants to make billions of dollars, really care about diversity? Isn't the goal of a company to make money? Greed aside, a company cannot survive without earning a profit. So it makes sense that their primary goal is to get you to spend your hard-earned cash on their stuff.

Diversity has nothing to do with profit. It's about making sure that everyone is represented in our increasingly-unified, global society (despite the shocking ideological differences that will continue to divide the East and West until the end of time).

Diversity should transcend money and business; it pertains to the very fabric of our society, the way we treat one another, making sure that the dreams of the great leaders of the past are fulfilled so that we live in a beautiful tapestry of oneness, united by our differences.

If you believe that load of shit, you need to leave Sesame Street ASAP. The world is about money, folks. You can't build an empire, a company, or even a personal life, without cash. I don't like it, but them's the breaks. Considering modern ideals about diversity are predicated on a united world, this “let's hold hands and not worry about money, hippie kind of philosophy,” is doomed to fail. Cash and diversity don't mix.

Consumer philosophy teaches us that to win over a customer, you have to appeal to their nature. A person's nature is inherently non-diverse. So the best way to lure shoppers is to divide them up into things called demographics and advertise to them specifically. It's why Facebook is so rich. Clumping us all together for the purposes of diversity is actually counter to that goal.

Perhaps that's why people who lean toward Socialism seem to love diversity so much; they don't want to pay for things, or earn money, so the idea of artificially forcing companies and culture to represent every race equally sounds good to them- even if it doesn't work.

It's also why pictures like this seem so wrong: 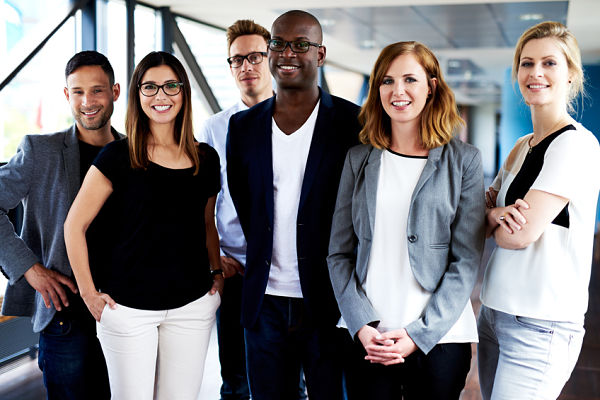 Wow. Every color of the rainbow. But something's off. Despite the different skin colors, they all seem the same? Perhaps because it's a posed stock photo, but perhaps it's also because- despite their different ethnic backgrounds- these people hold to the same ideas, lifestyles, and opinions.

So are they really diverse?

You may not care about McDonald's making more culturally-diverse commercials to push this agenda; a burger's a burger, right? But when long-beloved characters and stories are being warped to protect an empty goal of diversity, it tends to turn people off.

Because with all the belly-aching about diversity and inclusiveness, most people can see through to the real goal: social justice.

Reading between the lines of the signals from Marvel, it seems the company is pulling back on its push for greater representation and diversity in their titles and pursuing a strategy similar to what DC Comics dubbed “meat and potatoes” before their DC Rebirth relaunch.

A lot of people scoffed at Bleeding Cool’s reports as spin or rumormongering, but in a recent interview with ICv2, Marvel VP of Sales David Gabriel is blunt with his assessment of a Marvel sales slump that began last October. The reason given by Gabriel: people are “turning their noses up” at diversity. (via Bleeding Cool News)

Anyone that's been paying attention to the comic book industry in recent years knows that Marvel's attempts at "diversity" were just a thinly-veiled campaign to force social justice ideas into their comics (and onto their readers). This is largely because many of the creatives who work in the industry tend to be empty-head liberals- mostly white men who want to use superhero comics to virtue signal.

It's ironic, considering that Marvel movies are doing so well. This trend to rewrite and dramatically alter long-standing characters to meet the needs of progressives has not won over fans. While many long-time comic book readers are older men who want to keep their favorite characters the same, many newcomers are kids who- after seeing the last big Marvel movie- want to continue the adventures in the comics.

Then they find out that Iron Man has turned into an angry black teenage girl. Hmm, I wonder why comic sales are so terrible?

That's not to say that minorities and women shouldn't exist in comics. Every comic nerd can tell you that for decades there have been many well-known and beloved black and female superheroes (especially in the X-men series). But this recent attempt at bringing more "diverse" characters into the fold has nothing to do with diversity, but a clear political attempt to push liberal dogma onto readers. And readers don't like it.

Comics- like movies and other forms of entertainment- don't thrive when weighed down with political messages. They're at their best when embracing universal ideals that everyone can rally behind, like truth, justice, and the American way. Good overcoming evil. And, when not too hackneyed, true love.

Turning the fun and inventiveness of a character like Iron Man into something that can be used to push radical black activism? That's not going to win over readers. I doubt many people in Black Lives Matter put down the signs and clenched fists to read the latest Marvel comic. Unless of course, they own an Android tablet!

The real problem with the impending change from "diversity" to more traditional comics is that it seems that Marvel hasn't learned their lesson.

It's not that readers don't like diversity or female characters, dumb ass, they don't like forced diversity used to push an obvious social justice agenda.

But the numbers don't lie, and when people stop reading a comic because of how terrible it is, then you have a problem. This is also true in Hollywood, where the awarding-winning movies (usually with a strong social justice vibe) aren't the ones raking in the big bucks. And while we all love real diversity (i.e.: diversity of thought), forcing an idea onto people doesn't always work.

Companies need to respond to customers' buying habits. And when political agendas don't work, they need to wake up and realize that having a product that resonates with people is more important than pushing an ideal.

Perhaps we'll one day reach a happy balance, where a company can effectively protect diversity while still winning over customers. But that will take a nuanced touch and a refusal to let politics drive the decision-making.

I won't hold my breath.