After the horrific events which took place New Zealand, where a radicalized white nationalist killed 49 people in Christchurch’s local mosque, you’d naturally expect a strong-man figure like President Donald Trump to crack down on terrorism within his own borders. By the admission of members within his Department of Homeland Security (DHS), however, the government quietly “disbanded” a group of intelligence analysts who focused on America’s domestic terrorism.

After a report from The Daily Beast claimed the department disbanded the Office of Intelligence and Analysis (I&A), a group that was aiding local police through gathering intel on violent extremists, the DHS released a statement admitting to having “restructured” the team to new positions for unspecified reasons. The department also denies claims of having decreased its findings on domestic terrorism.

“The [I&A] has significantly increased (up 40-percent) tactical intelligence reporting on domestic terrorists and homegrown violent extremists wanting to commit violent acts against persons or property,” countered DHS Under Secretary David Glawe, speaking to CBS News. “Violent extremism to the homeland with triggers such as radical ideology white supremacy is an absolute top priority. The same people are working on the issues. We just restructured things to be more responsive to the I&A customers within DHS and in local communities while reducing overlap with what the FBI does. We actually believe we are far more effective now.”

Essentially, the government says there’s nothing to see here. The report, however, cites multiple officials both within and associated with the department who say there is, claiming findings have “dropped significantly” since the moves. While no decline estimates were provided by the sources, Sgt. Mike Abdeen, a member of the Los Angeles County Sheriff’s Department, told the publication his direct contact with the I&A has “dried up” for several months since the restructuring.

“It’s been very quiet lately,” Abdeen said. “It’s changed with the new administration. It doesn’t seem to be as robust, as active, as important — it is important, I’m sure, but it’s not a priority. It doesn’t seem like engagement, outreach, and prevention are seen as a priority as we used to see in the past. There were roundtable meetings in the past, there was more activity, more training, more seminars. Now it seems like it’s gone away.”

The former officials told the Daily Beast that the group was set to analyze events such as the Pittsburgh synagogue shooting which killed 11 people, the attempted #MAGA bombing of Democrats and media members against the president, and even shootings of Republican members of congress like Rep. Steve Scalise (R-LA). These were bipartisan attacks carried out on U.S. soil by extremist actors. Any disruption, whether via a complete disbanding or “restructuring” cuts, could be disastrous for public safety.

This isn’t an unfounded concern. While radicalization and outright terrorism is a bipartisan tragedy which plagues the political sphere, recent data published by the Anti-Defamation League (ADL) and other groups show the white supremacists are the leading force in this field. The propaganda efforts of white nationalists have increased by 182 percent since last year — a total of 1,187 distributions across the U.S.— which is significantly higher from the 421 total incidents recorded in 2017. The ADL also found rallies for white nationalist causes have also increased this year from 91 compared to the previous 76.

In the area of violence and terrorism, murders by white supremacist actors have reached 50 this year alone, which is a concerning 35 percent increase from the previous year. According to other findings from the Global Terrorism Database, there were a total of 65 terrorist incidents committed on U.S. soil, 37 of which were tied to fascistic and anti-government groups belonging to the right-wing. The number of fatalities by all groups has also sadly increased exponentially. 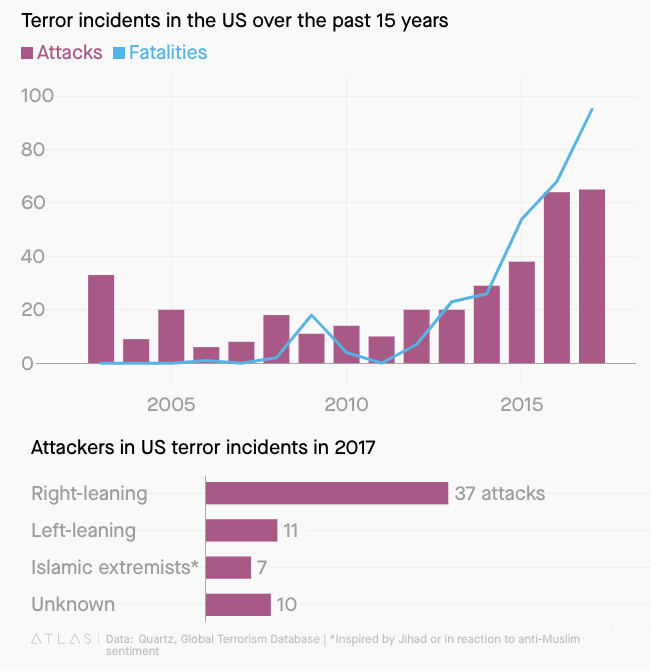 The reason for this increase seems to stem for unnecessary government gridlock. Multiple sources, current and former officials for the DHS, told The Beast this restructuring has led to the I&A being forced to coordinate with the FBI when sharing information with state and local enforcement—which, if true, creates a significant hurdle of inefficiency hurting Glawe’s narrative. This accusation, of course, was left unaddressed by the DHS. Two other former DHS officials claimed that while cooperation “eliminates redundancy,” it forces us to question the internal conflicts of whether the DHS or FBI are the ones actually preventing domestic terror investigation.

“When DHS is writing something that may be terrorist-related, they have to — regardless of whether or not personally they might want to — they have to work with the FBI,” said one of the former DHS officials working with the previous I&A team. “And because DHS doesn’t really have moxie and they don’t have a history of cultural and operational camaraderie when state and locals receive a joint product from DHS and FBI, it’s more serious and they know it’s well-written and well-sourced.”

This is assuming all individuals on the case aren’t the ones stifling the investigation, of course. Investigative reports from both The New York Times and The Intercept have showcased both these strong-man narratives of competing agencies and the various white nationalist links between the government’s highest and lowest enforcement teams showing enforcement can sometimes just be a sick joke.

Janet Reitman, the NYT journalist, delves into how various agencies had a “blind spot” to white nationalism infecting their states. Various findings from Intercept journalists Natasha Lennard and Alice Speri also established certain links between neo-Nazi and Ku Klux Klan gangs in the Los Angelas, Chicago, Cleveland and Arkansas police departments, either through direct membership or through the abuse of black citizens while officers were on duty.

Reitman’s piece cites an assessment from the DHS and the FBI warning of the growing white supremacist threat, painting the government as on the case protectors. The Intercept, however, found the assessment was disavowed by former DHS Secretary Janet Napolitano, enabling certain police departments to continue to ignore the problem’s rise. This loosened concern on white nationalist threats was reversed several years later when the I&A was refocused and the FBI also investigated similar, if not the same, white supremacist links to law enforcement.

It’s simply not enough for Sec. Kirstjen Nielsen, the current leader of the DHS, to provide the public with lip service on the severity of the white nationalist threat. “We, too, have seen the face of such evil with attacks in places such as Charlottesville, Pittsburgh, and Charleston,” she said in a recent speech, referencing the Christchurch massacre. “I want to make one thing very clear: We will not permit such hate in the homeland.”

If this is true, surely the government won’t mind proving as much through documented evidence and testimonies on the matter. Heck, increasing the I&A through more positions and funding could show their true colors. Otherwise, it’s the same old political theatre to save face. “You hear about how this administration says domestic terrorism is a clear priority,” concluded Nate Snyder, a former DHS official and an expert on countering violent domestic extremism, speaking with The Daily Beast. “But you can’t say that and then all of a sudden get rid of the unit that’s there to detect threats. You simply can’t have it both ways.”