You have to wonder if The Trump Administration is abandoning nearly all Obama era policies out of sheer spite at this point.

Last Saturday, The Associated Press reported that President Trump’s billionaire Education Secretary Betsy DeVos has a proposal to refuse full debt-relief to students who have been provenly defrauded by for-profit colleges.

Under former Education Secretaries Arne Duncan and John King, The Obama Administration’s policy relieved tens of thousands of students from over $550M in debt after it was proven that colleges were defrauding them of the education they advertised.

According to Trump’s department officials, who spoke to AP under conditions of anonymity, this DeVos proposal would only relieve “a partial amount” of defrauded student debt. This could have an impact on an unknown wave of students who should expect compensation for falling victim to fraud.

AP continue that The Department of Education may take into account the average earnings of students in similar programs and determine how much debt will be wiped that way, however, the rates and methods under DeVos’ leadership are still private and uncertain. 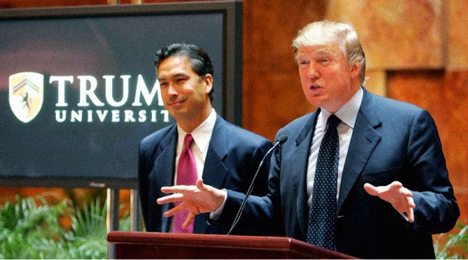 This becomes more curious when you consider two things:

Unless she’s going for a legacy that rivals Thatcher, I just can’t see being somewhat pro-fraud, somewhat pro-“The Swamp”, as a good political or representative move. But how about financially?

According to PRWatch, one of the few areas DeVos can claim she has any education experience is in one area… her ties to a student debt collection company.

Let’s consider this: In America, the student loan debt crisis last year reached an outstanding, growing amount of $1.3 trillion. That’s over half the cost of The Iraq War. This means the average 2016 graduate is around $37,172 in debt, and just one class of 24 students is in around $892,128 of collective debt.

To a Bernie Sanders supporter, that sounds insane. PR explains that student loan payments are surpassing groceries as the biggest monthly expense for many households. To pesky debt collectors, and their enablers in the billionaire DeVos family, that’s a lot of milk money to pocket from.

As secretary, DeVos is in a position to influence debt collection, servicing and recovery contracts, and the oversight of contracts. This is a conflict of interest when you consider the DeVos Family’s financial records with their private investment and management firm, RDV Corporation. This firm was most affiliated with LMF WF Portfolio, a company which oversaw the financing of a $147 million loan made to a debt collection agency that does business with the Department of Education, under the name of Performant Financial Co.

That’s already third dimensional corruption, if you will.

Now let’s turn to The Washington Post. They explain that 23% of Performant’s revenue comes directly from dealings with the Department of Education, which approved 14 contracts worth more than $20 million in 2016 alone. And wouldn’t you know, the company lost out on a contract bid last year that’s be protested with the Government Accountability Office.

What ever is DeVos to do caught between students and a rich place?

Now, since her report was filed with the Office of Government Ethics on January 20th, DeVos has divested personally from these institutions, but one should guess who will pay her nicely should she give “good government” to those who want their contracts.

Who will watch the watchmen, after all?

According to the Better Business Bureau, Performant racked up a staggering 346 complaints for conduct like calling debtors at work, calling family members of debtors at work, and potentially illegal behaviour.

Thanks to the Consumer Financial Protection Bureau, “the financial watchdog agency” organized by Massachusetts’ Senator Elizabeth Warren after the 2009 subprime mortgage crisis, numerous complaints from the DeVos-linked company have been recorded by defrauded students and pestered debtors.

It’s a company that desperately needs oversight. And not by one of their own.

Before her confirmation, journalist Scot Ross of One Wisconsin Now said:

“It is already unquestionable that Betsy DeVos is the most unqualified Education Secretary nominee in our nation’s history, but it is clear that if she is confirmed, she will make the student debt crisis exponentially worse. Allowing borrowers to refinance their federal student loans, just like you can a mortgage, is something that would immediately allow 25 million borrowers get lower interest rates at no net cost to taxpayers. If Betsy DeVos is personally profiting from the existing system, she will likely do nothing to help the hardworking student loan borrowers across Wisconsin and across the nation.”