#DeleteUber: The Company Might Be Digging It's Own Grave

“Stand by your principles and be comfortable with confrontation,” says Uber’s CEO, Travis Kalanick, “So few people are, so when the people with the red tape come, it becomes a negotiation.”

It’s pretty clear that Kalanick has built his company in the true spirit of his words. Uber is well-known for its defiant, confrontational attitude, but after the last month, it’s becoming more evident that this is blowing up in their faces. No one wants to be Uber right now.

Uber has long been held up as the gold standard in tech start-ups and innovation technology. They saw an industry that hadn’t been adapted in decades, fully defined the consumer need and offered a quick and easy solution. Unfortunately, Kalanick’s history of flouting regulations and aggressively fighting competition has started taking its toll. Although it’s estimated that he’s pushed his company to a $70 billion worth (about $15 billion more than General Motors), Kalanick’s public relations team has been tossed into the crisis fire enough times recently to turn them into steel.

Uber has regularly clashed with local regulators, competitors, critical reporters- even its own drivers. But their latest woes really all start with the #DeleteUber campaign. The hashtag dates back to 2011, but didn’t really pick up steam until 2014, and has now flared up spectacularly within the last few weeks. More than 200,000 customers deleted their accounts after Trump’s travel ban, and the perceived support Uber was expressing by refusing to join in solidarity with the taxi drivers’ hour-long strike. The NY taxi drivers started an hour-long strike to express solidarity with the protesters at JFK airport; demands for Uber rides during this time increased, and the company’s surge pricing- where fares increase automatically according to demand - kicked in, until Uber announced on Twitter that it would suspend the surge. Unfortunately, Kalanick’s earlier statement against the travel ban- dated before the protest was supposed to start- was ignored as many interpreted the tweet as support for Trump’s executive order, leading to the account deletions. Unfortunately, Uber’s main competitor, Lyft, vowed to donate $1 million to the American Civil Liberties Union, the civil rights group that fought the ban in court. 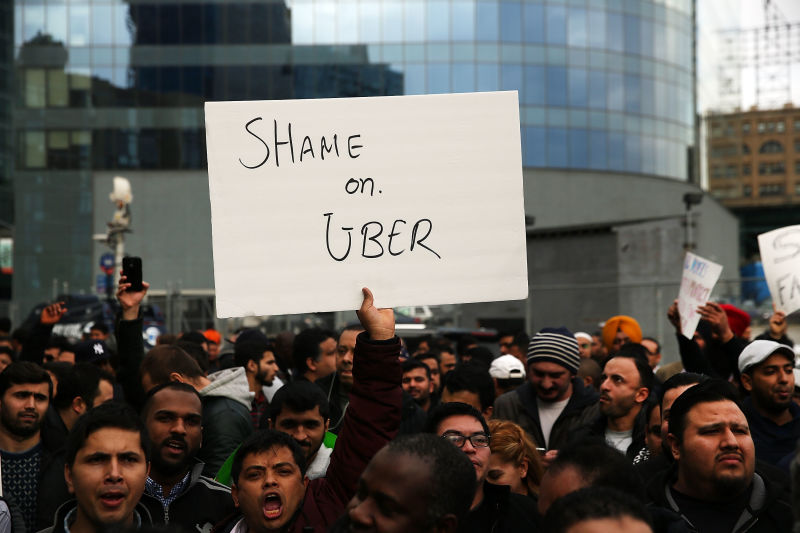 There was another matter that protestors and even his own employees zeroed in on: Kalanick had joined Trump’s economic advisory council in December. After Trump’s immigration order (aka travel ban), many staff members wondered why Kalanick was still willing to advise the president.

“What would it take for you to quit the economic council?” at least two employees asked at a staff meeting on the Tuesday after the #DeleteUber weekend. On the following Thursday, Kalanick gave his answer, stepping down from Trump’s advisory council. In an email obtained by the New York Times, Kalanick informed his employees:

“There are many ways we will continue to advocate for just change on immigration, but staying on the council was going to get in the way of that.”

As if that wasn’t bad enough, former engineer Susan Fowler then went public with some startling revelations about the company culture. In a Feb 19 blog post, Fowler shared that she had been sexually harassed by a supervisor and that her complaints were brushed off by Uber’s human resources department. She claimed that HR refused to discipline her manager even though he had harassed other women, and that she was told to expect a poor performance review if she stayed on the team.

Fowler left Uber in December to join a digital payments company, Stripe. After her post, though, Fowler was then forced to ask her Twitter followers not to disclose any personal information about her if contacted. Fowler alleges that a smear campaign appeared to be underway. Uber formally denied this in a statement, but Mike Isaac of the New York Times released a scathing piece detailing the long history of bad behavior inside the company last Wednesday. Many began to hop on the #DeleteUber wagon after the highly aggressive, “bro” culture at Uber was revealed; so many that some of them were met with a pleading message directly addressing the Fowler’s allegations. 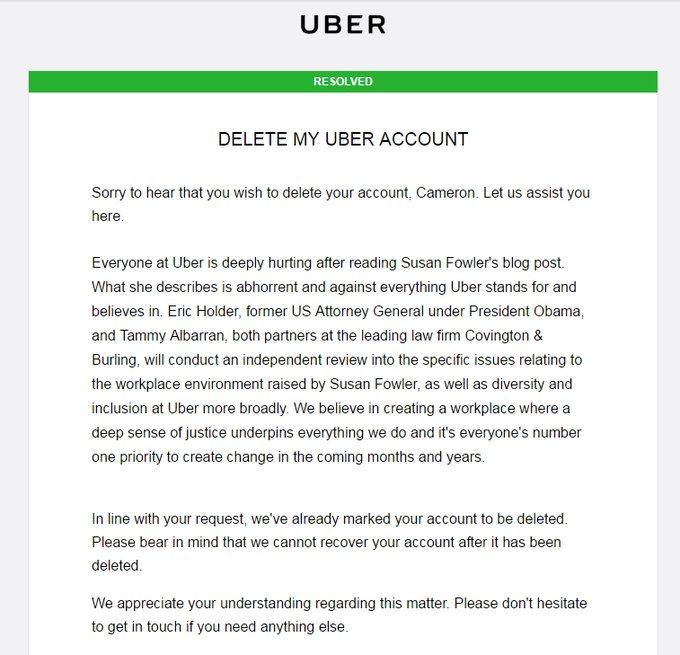 These quickly spread on social media, but Brooke Anderson, Uber spokeswoman, claimed that this message went out to fewer than 40 people. She characterized it as a “mistake.” In an open letter to Kalanick this week, Uber investors Mitch and Freada Kapor hammered the company for its “destructive” and “toxic” atmosphere. Several former Uber employees who spoke with USA TODAY described the company as a bellicose, frat-house environment where milestones were often celebrated with chest bumps. Men held push-up contests nightly at their desks, and then there’s the infamous joke Kalanick made about the company’s nickname being “Boober” for the female attention it got him. An older story has resurfaced of Uber deflecting responsibility when an Uber driver hit and killed a 6-year-old girl in between rides as well.

An image of Uber has now permeated the public, with numerous reports painting Uber not as a transportation-solving company, but as a place where Kalanick and fellow “ballers” making money to continue their frat-house lifestyles. Believe it or not, it gets even worse.

Last Thursday, Uber was hit with a lawsuit from Waymo, the self-driving car spinoff of Google. The suit alleges one of its former employees, Anthony Levandowski, downloaded more than 14,000 highly confidential and proprietary files shortly before his resignation in January 2016. He went on to found self-driving truck startup Otto, which was bought by Uber back in August for $680 million. Levandowski currently heads Uber’s self-driving car division. Waymo alleges this division is now using its proprietary technology.

“Instead of developing their own technology in this new space, Defendants stole Waymo’s long-term investments and property,” Waymo said in its complaint. In a separate blog post, Waymo wrote that it was seeking an injunction to “stop the misappropriation of our designs, return all trade secret information and cease infringing our patents.”

An Uber spokesperson said in a statement that the company had “reviewed Waymo’s claims and determined them to be a useless attempt to slow down a competitor, and we look forward to vigorously defending against them in court. In the meantime, we will continue our hard work to bring self-driving benefits to the world.”

Many are wondering whether Uber can recover from these constant hits. After a discombobulated 2016 in which Uber burned through more than $2 billion, it’s hard to imagine what course of action Kalanick is going to take next. Despite the fact that Uber has captured a majority of the ground transportation market and flipped the taxi industry- which Kalanick has snidely referred to as the Big Taxi Cartel- they still just aren’t making enough money. There are findings emerging now that rider fares only cover roughly 40% of a ride, with the remainder subsidized by venture capitalists. Uber tapped Wall Street banks for a billion dollar loan using their $70 billion company evaluation; no actual assets to present.

Kalanick’s confrontational attitude has pushed the company forward on little more than a bet: that Uber can exist on a playing field all on its own without regulations, carving a path to financial salvation by dominating the taxi market. But without a dramatic shift in the company’s business, Uber may very well collapse on its own. Unless they increase fares three-fold, somehow completely monopolize the taxi and ride-hailing market, or power through the lawsuit and roll out the self-driving car fleets, the public relations battle they are fighting with the constant hits is the final nail in their coffin.

Anyone else available to pick me up from work today?