It’s the same old Democratic Party, now with some new dirty tricks. In the wake of their stunning defeat to President Trump in the 2016 election, members of the establishment party and the progressive movement have been on a divisive warpath to shape America’s left-wing.

For months, in spite of Wikileaks’ and former DNC chair Donna Brazile’s evidence proving the 2016 presidential primary was rigged against progressive candidate Sen. Bernie Sanders (I-VT), establishment entities within the party have desperately tried to frame themselves as the purveyors of “unity” — while simultaneously framing progressives as the antagonizing, stubborn fringe who enable the president’s agenda. This faction, who curiously goes by the name of #TheResistance, couldn’t be further from reality. To the contrary, establishment Democrats, time and time again, have been caught red-handed as the controlled opposition for their Republican colleagues in power — and no entity has played this role better than the almighty Democratic Congressional Campaign Committee (DCCC).

It’s quite ironic to see a party, who lost over 1000 seats under the leadership of establishment Democrat Barack Obama and former presidential candidate Hillary Clinton (whom he endorsed), make demands of the progressives whose only representative was the Green Party’s Jill Stein — the woman who secured only 1% of the vote nationwide — rather than reform themselves. And yet the DCCC, in all their arrogance, have taken to doing the expected of egomaniacs: eating their cake and blaming others for the weight gain. Those looking for a real-world example of this, as reported exclusively by TYT Investigates’ credible journalist Michael Tracey, need look no further than a hypocritical internal memo released by the DCCC in the lead up to the 2018 mid-term elections. According to Tracey, who obtained the memo personally, the fundraising committee dictates that in order to receive support, the campaigns must agree “not to engage in tactics that do harm to our chances of winning a General Election.” Tracey goes on to explain the memo does not list what tactics are prohibited.

Furthermore, the committee dictates that candidates, regardless of differing political beliefs, are to organize an undefined “unity event with their primary opponents following a primary,” according to the memo’s demands.

This call for unity is consistent with the rhetoric and actions of DNC chair Tom Perez and Sen. Sanders, acting the lapdog in 2017 during their mutual participation in a “unity tour” across the country — odd, considering Tom Perez was implicated in the DNC emails released by Wikileaks, caught tossing ideas around to screw Sanders over with former Clinton campaign chairman John Podesta. For the DCCC, a Democratic Party entity, to demand unity, whether on paper or through a handshake, isn’t out of the ordinary. When faced with scrutiny, however, analyzing the lack of unity displayed by the DCCC administration themselves, these demands ring incredibly rich.

Reported early last week by The Intercept, it was the DCCC who took incredible steps to ensure the voters know what they want them to know about Houston, Texas’ metro-area District 7 candidate Laura Moser, the candidate running unapologetically as a progressive under the banner of the Justice Democrats organization.

Through the grim picture Democrats paint of progressives, you would have to believe Moser was the radical one calling for party division and selling points of attack for the opposition — and yet this isn’t the case.

In fact, it was the DCCC, the supposed hero of neutrality, who engaged in their own opposition research on Moser. They believe a fellow Democrat is the opposition — so much as to warrant an investigation on her to tell voters to steer clear at the request of the DCCC, while at the same time calling for party unity.

This research, of course, was later published on the committee’s website: 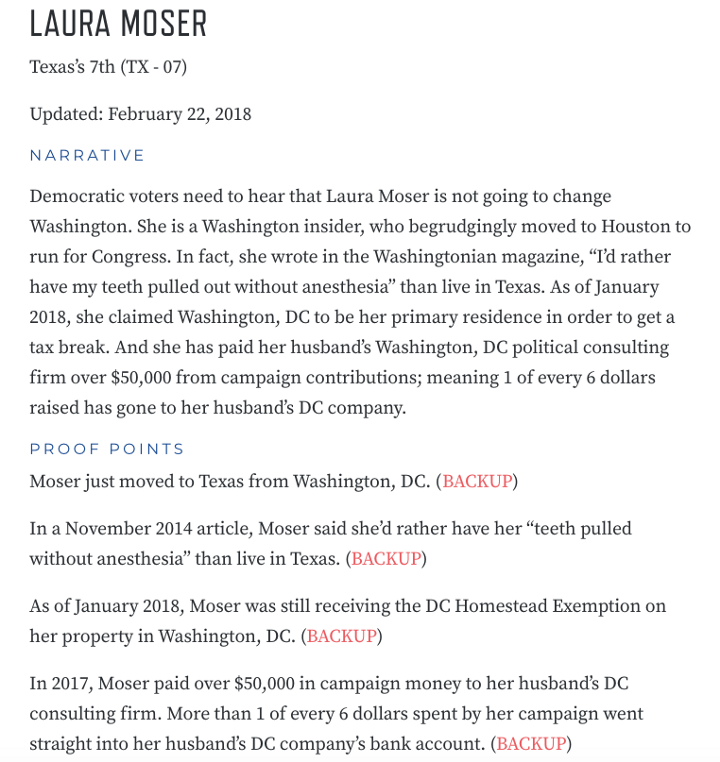 “Democratic voters need to hear that Laura Moser is not going to change Washington. She is a Washington insider, who begrudgingly moved to Houston to run for Congress,” warned the DCCC memo, an organization that swore to be impartial in helping to elect Democrat registered candidates.

Thus far, the committee has only published two opposition research memos — one against Moser, the other against the conservative Rick Saccone, the Republican running in an upcoming special election in Pennsylvania who they said is corrupt and “living large on taxpayer money and lobbyists’ credit cards.”

Their evidence for Moser’s corruption, evidently, is at best misrepresented, (they cite their own document as proof), and pure projection on the DCCC’s part. Their incredible charge is for self-dealing, writing in the memo:

This is true… except the money immediately left that bank account to invest in political ads — exactly what the money was intended to go towards. To buy ads, you have to store the money somewhere, and it’s not hard to argue the advertising firm’s bank account is better than Moser’s pocket. This is not illegal, it doesn’t have the appearance of illegality, and the firm they’re talking about is Revolution Messaging. Moser, being the husband to Arun Chaudhary, a partner for the online consulting and advertising firm, ultimately decided to place her trust in the same firm that represented the 2016 presidential primary campaign of Sen. Sanders — known for having taken no corporate PAC or SuperPAC money and averaging around $27 per donation at a time.

It’s a misrepresentation on the DCCC’s part to label Moser, a progressive journalist, some form of a “Washington Insider” based on the ethical way she’s transferring small-dollar donations into buying political ads. You would expect Washington insiders like the DCCC to know this by now, given their own track record on self-dealing is similar — and perhaps more unethical.

The Young Turks host Ana Kasparian rightly pointed out that a grand tradition among the DCCC is threatening a candidate’s funding if they don’t choose from the “consultant factory” of people on the party’s payroll — made explicit in the memo sent out to Democratic congressional candidates demanding “professional staff and consultants” be hired from their “comprehensive list of resumes.”

This memo was confirmed by James Thompson, the failed congressional candidate in Kansas in 2014, who spoke to The Intercept last month saying on the record the DCCC told him to “spend a certain amount of money on consultants, and it’s their list of consultants you have to choose from.”

Rep. Tim Ryan, a Democrat from Ohio. was also aware of the DCCC’s consultant ways of Washington, telling Roll Call after the 2016 elections that the DCCC “need to go on a consultant detox.”

This is significant because consultants make bank off media placements, deriving some percentage of money from their candidate as a fee for their alleged services (which we all know is bullshit speak). The Federal Election Commission (FEC) shows that consulting firm Mothership Strategies, founded by members of the DCCC, earned $3.9 million from the failed special election campaign for Georgia candidate Jon Ossoff last year — placing that money in the company bank account. The Intercept reports that $2.5 million of that Ossoff money then went into buying media ads. This isn’t necessarily illegal, though Ossoff does have his fair share of questionable donors, but rather illustrates the obvious hypocrisy of the DCCC. The only difference is Moser has a proven track record of wanting to get money out of politics, which would eliminate the jobs of these Washington consultants — unlike the other Washington nightcrawlers.

Moser has had the benefit of stepping foot on Capitol Hill and middle America, much to the denial of the DCCC. It didn’t just stop at the published dirt on Moser being a “Washington insider.” Members of the DCCC, such as the committee’s Communications Director Meredith Kelly, spoke publicly to the Texas Tribune to condemn her “disgust for life in Texas”:

“Voters in Houston have organized for over a year to hold Rep. [John] Culberson accountable and win this Clinton district. Unfortunately, Laura Moser’s outright disgust for life in Texas disqualifies her as a general election candidate, and would rob voters of their opportunity to flip Texas’ 7th in November.”

This, too, is an out of context misrepresentation of a Texan by one of Washington’s biggest organizations. As The Guardian delightfully fact-checks, the suggestion Moser hates Texas comes from an article she wrote during her time as a freelance journalist working for the magazine Washingtonian. They ripped a snippet out of her 2014 writing where she said she would “sooner have my teeth pulled out without anesthesia” than live in Paris, Texas — citing the time she spent with her grandparents.

Writer Lawrence Douglas, the professor of law working as a journalist for The Guardian, claims this article was about her preferences for big cities in Texas, rather than a critique of Texas on the whole. This is especially funny when you consider that Moser is running in Houston… the biggest city in the state of Texas - a fair bit away from the more rural Paris.

The suburbs seem kind to Moser, having out-raised both Lizzie Pannill Fletcher, the candidate backed by EMILY’s List — the PAC that seeks to elect left-wing women out of some form of vagina solidarity. The only candidate she has yet to stop is Alex Triantaphyllis, a former Goldman Sachs analyst running as a Democrat.

If we are to be generous, the DCCC will frame this as a justified attack on Moser because they don’t believe she can win in what they believe is Trump country — which says more about how THEY view Texas than anything to do with Moser or her out of context comments.

The Huffington Post noticed the district Moser is running in went for Clinton 49% to 47%— a significant gain for the Democrats in four years considering Mitt Romney won over Barack Obama by 21%. To say a left-wing candidate can’t at least have a shot in Texas is following the political rule that should have been thrown out once America was gifted President Trump. Anything can happen at this point.