Project Veritas, the right-wing investigative group founded by convicted fraudster James O’Keefe, will have their operations kept in the dark no more. According to a new report from The Intercept, a U.S. district court judge granted the American Federation of Teachers (AFT) the “right to discovery” of the group’s internal documents following their series of videos accusing the union officials of protecting child abusers within their ranks.

The ongoing legal battle, which began last September in the Eastern District Courts of Michigan, has been centered around the actions of Marisa Jorge, a political operative for the Project Veritas team, who gained source access by applying for an AFT summer internship using fake teacher credentials. Presenting herself as Marissa Perez, a student for the University of Michigan, Jorge was able to secure three months of secretly recorded conversations, access to internal union meetings, databases, among other confidential information on AFT private property.

O’Keefe, forming the non-profit group in 2010, is notorious for leading these kind of undercover investigations into liberal organizations, such as ACORN and Planned Parenthood, where deceptive practices, selective editing, and doctored footage are used to fit a desired political narrative. It was only this year when The Washington Post exposed the group for trying to feed newspapers a false rape allegation about Alabama’s former U.S. Senate candidate Roy Moore, at the time accused of rape and child molestation by eight women. The group, inserting themselves in the story, tried to see whether mainstream newspapers would take their bait without source verification. It’s one thing to deceive a subject to catch their authentic actions on camera, sure. It’s another to deceive the audience themselves.

AFT president Randi Weingarten and AFT Michigan President David Hecker released a joint statement using the defense that O’Keefe’s latest exposés are just like his others, claiming the series is a “heavily spliced” smear tactic to discredit educators and their unions. This deceptive reputation has plagued the credibility of Project Veritas’ reporting for nearly a decade, showing the group is more committed to conservative agendas than truth. 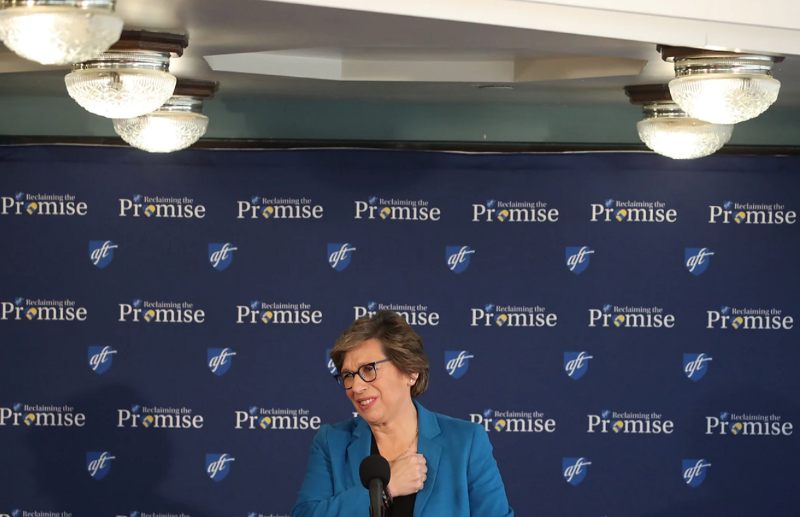 “In this particular case, following accusations of a teacher’s misconduct with a child of a woman he was dating years before, the union and district officials worked together to separate a teacher from service and make sure students were protected,” Weingarten and Hecker stated. “To this day, the teacher denies the accusations, and no charges have been filed. AFT Michigan continues to prioritize the well-being of students and the promise of high-quality public education in Michigan.”

This, of course, is what a defendant would say. But who’s telling the truth?

In their report, titled “BREAKING: Alleged Child Molester Paid Off in Union Negotiation by Michigan AFT,” Project Veritas were touting how they were able to obtain undercover footage and redacted documents “which reveals that the union protected a teacher after accusations of sexual misconduct with a seven- or eight-year-old girl arose.”

Project Veritas has not released full, unedited footage of these discussions.

The accused teacher, who goes unnamed, his face blurred throughout the video, was never charged with a molestation crime. The case, however, was tied to his name after the victim’s family filed a police report in 2006. This was prior to his employment at the alleged victim’s school, citing 2013 documents detailing how the case was settled with a $50,000 payout for his resignation rather than a straight dismissal, as reportedly requested by the superintendent. Even if we grant the group have selectively edited footage of the teacher and Johnny Mickles, the union official who represented the accused who’s shown throughout the segment, it’s a weak defense given the context is about the corroborated details in these obtained documents.

“When the student got to his class… apparently all these memories she had suppressed came out,” Mickles told the PV journalist. “She went to the superintendent and basically spilled her guts and the superintendent terminated the teacher. He was terminated but we negotiated a resignation for him. He didn’t lose his [teaching] certification. He got to be on leave until they drew up the settlement and then he got, like, the rest of the school year’s payout. [That’s] six weeks of pay I think… then he got a $50,000 payout.”

If we’re to actually believe O’Keefe, the AFT could, in fact, be the deceivers. That said, why should we believe them without knowing what all the facts are? Enter U.S. District Judge Linda Parker, an Obama appointee and actual graduate from the University of Michigan, who’s been tasked with handling this case.

In September, the AFT issued a restraining order against Project Veritas, attempting to block the group from publishing or disclosing any materials collected on their grounds. By December, Parker lifted the restraining order, saying the AFT had not sufficiently demonstrated it would be harmed by the materials and said any injunction “most certainly will infringe upon the Defendants’ First Amendment rights.”

“It’s going to get interesting now because we have the opportunity to dig pretty deep into Project Veritas and their activities,” AFT Michigan attorney Mark Cousens told The Intercept. “We can discover not only how they work, but what they did in Michigan,” citing how they’ll have access to information of Jorge and the materials she may have collected under her intern status. These revelations could bring to light whether O’Keefe is just playing his same old tricks, using edited falsehoods to smear his left-wing political rivals, or whether a teachers’ union failed at their jobs so badly that even conservative slacktivists can win with the truth on their side.

Their war on teachers’ unions doesn’t stop at the AFT. In May, Project Veritas released undercover videos of union officials in New Jersey accused of protecting teachers with ties to abuse. Their footage led to the suspension of two union presidents and New Jersey Democrats, including state Senate President Steve Sweeney and Gov. Phil Murphy, to call for more serious union investigations. Project Veritas claims “more undercover videos of teachers unions from ALL ACROSS THE COUNTRY in the coming days and weeks.”

Whether those videos are fake, however, is up for the courts of law and public opinion to decide.