CNN host Chris Cuomo called on California Sen. Kamala Harris to prove she was born in the United States after a pro-Trump conspiracy troll suggested she was not eligible to run for president in 2020.

Jacob Wohl, who is the youngest person ever banned from investment trading for fraud and now pushes debunked conspiracy theories about people like special counsel Bob Mueller using laughably bad fronts, pushed the new birther conspiracy against Harris after she declared her 2020 run.

“Kamala Harris is NOT eligible to be President. Her father arrived from Jamaica in 1961—mother from India arrived in 1960. .Neither parent was a legal resident for 5 years prior to Harris’s birth, a requirement for naturalization. Kamala was raised in Canada,” Wohl wrote, though the only requirement to run for president is to be born in the United States, which she was and Wohl admits.

“Just like the worst President in American History, Barack Hussein Obama, Kamala Harris was NOT raised in the United States,” he complained. “Is it too much to ask to have a President that was born and RAISED in America?” 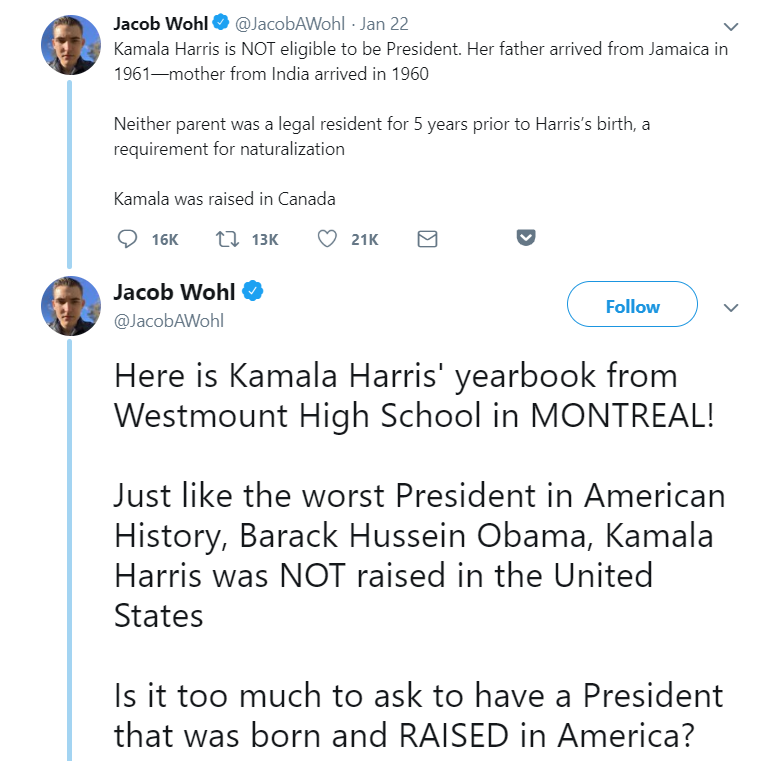 The tweet was stupid and easy to overlook among countless QAnon and other conspiracy theories spread by MAGA chuds on Twitter but it quickly blew up after Cuomo decided that it was a legit claim.

"And hopefully there will be no games where the issue keeps changing for righty accusers…and…the legit info abt Harris comes out to deal with the allegation ASAP. The longer there is no proof either way, the deeper the effect," Cuomo wrote in a tweet he soon deleted after getting an epic amount of backlash.

“Deleted my original tweet because it was taken literally the opposite way that I intended it,” he later claimed. “Sen Harris has no duty to justify any such accusation, let alone a birtherism attack. You accuse, you prove. That was my point. Apologize for confusion.”

Deleted my original tweet because it was taken literally the opposite way that I intended it. Sen Harris has no duty to justify any such accusation, let alone a birtherism attack. You accuse, you prove. That was my point. Apologize for confusion.

Reporters on Twitter slammed Cuomo for giving credence to a nonsensical claim.

WTF? What does Cuomo mean by "no proof either way"? She was born in Oakland, thus a U.S. citizen. This conspiracy theorist isn't even disputing that, just stating other completely irrelevant details. Why should Harris respond to every crank on the internet? https://t.co/ZS1Ry1lVFx

I am still waiting for Chris Cuomo to respond to the legitimate allegation that he wears a toupee.

The longer there is no proof either way, the deeper the effect.

Let us please, PLEASE, preeeeettttyyyyy please not engage this ridiculous birther shit being thrown at Kamala Harris. Have we learned nothing from the past few years?????

Cuomo goes on Twitter rampage to deny he said what he said:

Talking abt the accusers. Not the senator. Read, think...this is Twitter...don’t just assume things. Ask. They made the accusation. They need to back it up. Period. https://t.co/0DiOwNa4CN

That bullshit. It is on the ACCUSER to prove what they say about Harris. Not on her. That’s my point. That’s the only point here. https://t.co/rIQb3t6afB

No one ever owes an accuser proof of their accusation or rebuttal. That’s the point I am making. As for the second part, wait for the probe report and the conclusions will follow from there. https://t.co/BEduQbrNVT

I hear you. I don’t agree. I don’t see two sides here nor did I there. You accuse, you approve. Was never for Obama or Harris to respond unless there is credible, corroborated proof of the accusation https://t.co/EVTLyrxr11