Over the mid-January weekend, the controversial former intelligence analyst known as Chelsea Manning, a war crime exposing whistleblower who faced seven years of detainment and torture in a United States military prison, has recently announced her candidacy for the Maryland seat in the U.S. Senate.

Manning, soliciting campaign donations via her @xychelsea Twitter account with the caption “yup, we’re running for senate,” confirmed her bid by releasing a rather chilling, clearly homemade campaign video showcasing her agenda: values that lean pro-anarchism, pro-socialism, pro-revolution, as well as the endorsement of “fighting,” be it politically or physically:

“We live in trying times,” Manning slowly narrates, the video presenting footage of anarchist and neo-nazi violence from last year’s deadly “Unite The Right” rally in Charlottesville, Virginia. “Times of fear, of suppression, hate. We don’t need more or better leaders, we need someone willing to fight.”

“We need to stop expecting that our systems will somehow fix themselves,” she continues, presenting Democratic lawmakers in a meeting with Republican President Donald J. Trump. “We need to actually take the reins of power from them. We need to challenge this at every level. We need to fix this. We don’t need them anymore, we can do better.

“You’re damn right we got this,” she concludes, using her well-known hashtag #WeGotThis used by the FBI-defined left-wing domestic terrorists ANTIFA.

Already we’re presented with a serious case of, to use the progressive lingo, problematic irony. Manning already embodies what is being desired of candidates in progressive circles.

She’s even used her columnist position at the staunchly leftist newspaper The Guardian to propose legislation protecting whistleblowers just like herself. To call her an anti-establishment political dissident is obvious… which makes her implied calls for violence, through her tweets and use of footage of ANTIFA, known for assaulting and suppressing the free speech of political dissidents, such as conservative comedian Milo Yiannopoulos and far-right white nationalist Richard Spencer, all the more ironic.

If it’s her own torture, and the torture of other whistleblowers and brown people overseas, Manning appears opposed. And she would be right. Torture and violence, for those who need to be reminded, is wrong. When it comes to the progressive-backed torture of “deplorable” dissidents, however, it’s fair to question how a perceived anarchist like former Private Manning will respond.

A boot to the face, perhaps?

Considered a problematic figure among the Clinton left and Republican partisans, facing wrongful smears of being a “Kremlin stooge” for assisting Wikileaks, and a ‘traitor’ for leaking classified information pertaining to systemic U.S. war crimes in Iraq and Afghanistan (exposing footage which showed the death of Reuters’ journalists and first responders), Manning will rely on her progressive base for support.

Senator Cardin authored and released a 200 page masterpiece on Russian influence in western elections. Suddenly he has a primary from Kremlin stooge Assange’s Wikileaks primary source Chelsea Manning. The Kremlin plays the extreme left to swing elections. Remember that.

Chelsea Manning has decided to run for the U.S. Senate. The last place that traitor and cop-hater belongs is in the Senate. He's a disgrace to this country.

It’s no doubt they’ll be her needed target audience against the Democratic Party of Maryland’s incumbent, the 74-year-old career Senator belonging to the oh-so-dreaded straight white male race who goes by the name of Benjamin Cardin.

Why the sudden stress on their gender differences? Well, I invite anyone with questions to take it up with The Intercept’s co-editor Glenn Greenwald, himself being a (gay) white male progressive, who illustrates the framing of the Manning/Cardin primary before it’s even begun. His article titled “Centrist Dems Launch Smear Campaign Against Young Trans Woman, All to Keep an Old Straight White Man in Power”, demonstrates the role identity will play in their race, detailing how this “standard, banal, typical, privileged and mediocre politician,” with no real policy achievements to his name, will be shamed out by his record (the only thing that matters), as well as his inherited gender, sexuality, and race that the base finds boring and immoral.

Part of that record, as later pointed out by Greenwald, includes his support for illegal Israeli settlements at AIPAC, where he joins neoconservative Republican Senator Lindsey Graham in agreement. 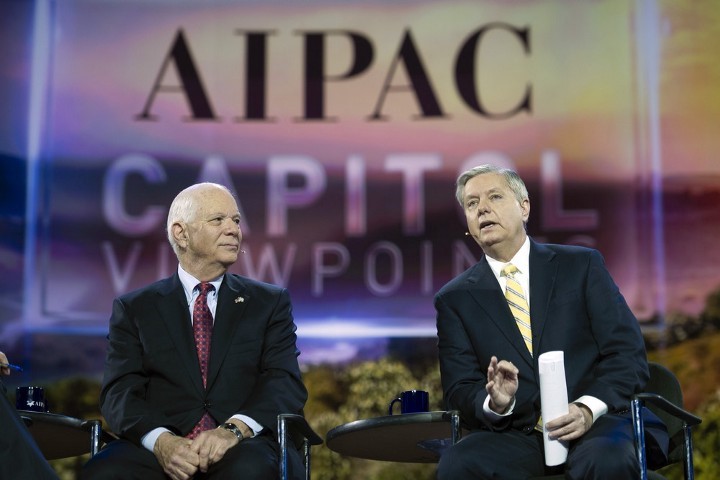 Cardin, however, is also no friend to free-speech dissidents. Whereas the progressive left punch and pepper spray their protestors — taking the boot to the First Amendment that guarantees spoken liberty — neoliberals like Cardin are much more polite about their authoritarianism, authorizing a bill that would make it a judicial felony to support any boycott of the state of Israel.

This, of course, was denounced by the ACLU on its face — an organization that has protected all dissidents from Manning, Yiannopoulos, Spencer, Nazis, BLM, you name it — and resulted in multiple co-sponsors opting out of support, such as New York Senator Kirsten Gillibrand.

This leaves Democrats, once again, with a lesser of two evils scenario where no guarantee of free speech and freedom from tyranny, be it social or political, is granted. Instead, they are left with choosing the identity of their masters, which would be about as much freedom as getting to choose which whip strikes you down.