The Case for Splitting California (It Might Be on the Ballot)

If there’s one state in the Union that meets the qualifications of a group of people in need of formal dividing lines, it’s California. While the West Coast is often pigeonholed as the Left Coast in the minds of more Easterly lying Americans, the reality of California’s demographics, varied industries, and ideologies is far more complicated than a single characterization.

In fact, a referendum that received 600,000 signatures, far more than the required 365,880 for a referendum to be included on the formal ballot, would seek to divide the state into three distinct regions. That referendum, logically dubbed CAL 3, has yet to qualify for the November ballot, with a few mainstream sources reporting accurately that it “may” qualify for inclusion in the voting process. There are still hurdles to be cleared, namely the signature validation process.

The measure was spearheaded by billionaire venture capitalist Tim Draper, who founded Draper University, a well-known for-profit school teaching entrepreneurship in Silicon Valley, among his other investments including a massive stake in Bitcoin. Draper previously attempted to push a referendum that would divide California into six states, but he failed to collect the requisite number of signatures for it to qualify for the 2016 ballot after nearly half of the 1.3 million he collected were deemed invalid. Apparently, Draper was more prepared to procure the signatures he needed for the latest ballot, and/or perhaps Californians are more receptive to the notion of a state divided into three parts instead of six. Certainly, in the wake of the increasing division post-2016 election, those in the state are feeling more divided than ever.

Whatever the reason, CAL 3 seems primed to qualify for voting in November, so let’s look at why such a measure makes sense.

The plan would divide the current state into three separate states: Northern California, Southern California and California. Those names would be subject to change based on the will of each state’s residents, according to the details of the proposal. These dividing lines, according to Draper, would preserve historical county lines while alleviating the issue of one government presiding over a massive expanse of land which many have come to see as unpractical and, for many, untenable. 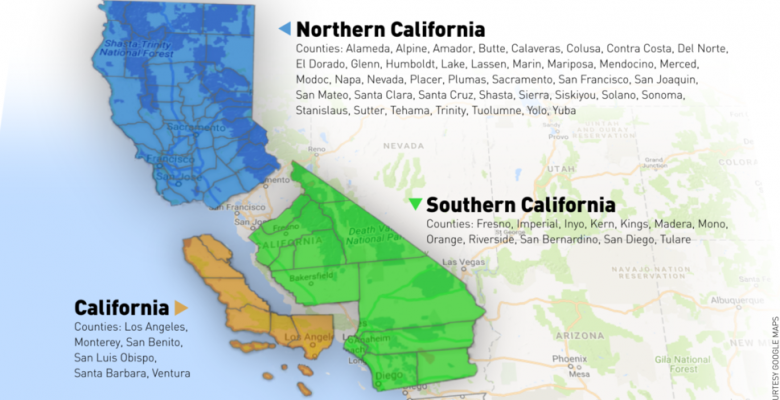 According to the proposal, these divisions are based on the different industries that predominate each respective region. The Northern California region, which includes Sacramento, San Francisco, San Jose, and more northern lying cities such as Eureka and Redding, is known first and foremost for wine production, forestry, and let’s be honest, pot. Meanwhile, Southern California, including San Diego, Anaheim, Palm Springs, and the towns dotting the Southern border, are sustained by both financial services and trade, especially cross-border commerce. The region currently proposed as ‘California’, including Los Angeles, Monterey, Santa Barbara, Ventura, Oxnard, and other western-lying coastal and slightly inland townships is known for its tourism and entertainment industries, especially Hollywood.

We also know that, with exceptions, large demographic swaths which fall along both ethnic and ideological lines would be separated by these new state lines. Southern California, with the military city of San Diego, as well as inland farming communities such as Bakersfield and Fresno, contains some of the largest populations of conservatism in the state. Meanwhile, the more southern-lying cities and towns in the Southern California region, such as Chula Vista and Escondido, are comprised of largely Hispanic populations. While these forces may be seemingly  opposed politically, each group would theoretically have more say within their state’s laws and political decisions than they currently do.

Meanwhile, the regions marked California and Northern California would almost certainly fall along more liberal lines, but with their own respective governments they would be considered less imposing of those views upon the cities – primarily lying in the Southern California region – who have felt they are being ruled by a government that doesn’t represent their values and beliefs for many decades.  Those who would find the status quo in their current state to be opposed to their way of life would now have a less geographically radical measure in place, to move to one of the two other states formerly included within the single state of California, even if that means embracing some geographical changes.

The petition has yet to be formally accepted. As Draper found out in 2016, the signature validation process can completely reverse what seems like the most likely course of action. Even if the signatures are validated, and Californians voted to divide the state – still an unlikely proposition – Congress would then have to approve the measure, which is equally if not more unlikely than the prior two steps toward a divided state of California. Since 1850, more than 220 proposals have been put forth suggesting that the state be divided, and it has yet to happen.

But, California is, like the nation since the Civil War, more divided than it’s ever been. And, critics of the split are failing to come up with any sensible argument to oppose it.

Steven Maviglio, a longtime Democratic Party political consultant who was a co-chair of the effort to oppose Draper’s 2014 initiative to split California into six states, says “Splitting California into three and creating three new governments does nothing to solve our state’s challenges other than tripling them.” (CBS Local)

Actually, it wouldn’t triple California’s problems, it would divide them in three. Surely Maviglio is thinking of lost tax revenue when he says this.

So, while the referendum for a three-part California is unlikely to pass, it’s hard to argue that it doesn’t make a heck of a lot of sense.