Burn the Flag, Lose Citizenship or Go to Jail

Someone needs to put a kiddie web-blocker on Donald’s phone. Among Trump’s other infamous tweets, Tuesday morning the President-elect suggested that Americans who burn the national flag should have their citizenship stripped away, or face up to a year in jail. I’m sorry Mr. President- you cannot take a person’s citizenship away for burning the American flag and you can’t fine them either. Perhaps you should read the Constitution- it’s the thing you’re swearing to protect in the upcoming presidential inauguration. 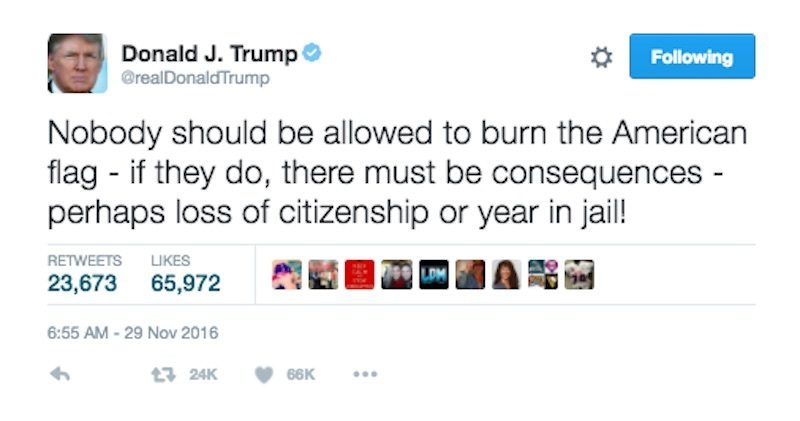 This isn’t the first time the United States has dealt with such controversy. A 1989 Supreme Court ruling, Texas v. Johnson, said that burning the flag is protected by the First Amendment. One of the Supreme Court Justices who was in favor of protecting the constitutional right in the decision was Justice Scalia, who died in February. This is the same person that Donald Trump said he would want to model his next Supreme Court candidate after.

When George H.W. Bush (Dubya’s daddy) was elected President, he called for an amendment to the constitution which would disallow flag burning, saying: “Flag burning is wrong, dead wrong,” and "as president, I will uphold our precious right to dissent, but burning the flag goes too far, and I want to see that matter remedied." In response to President Bush’s outcry and the Supreme Court ruling, Congress passed the Flag Protection Act, which banned burning the American flag. This act was also ruled unconstitutional by the Supreme Court, with the same majority decision of 5-4.

In 2005 Hillary Clinton co-sponsored and attempted to reenact the Flag Protection Act, but failed. This proposed revision made flag burning with the intent to disturb the peace or incite violence punishable by a $100,000 fine, and a year in jail. While it didn’t include the stripping of citizenship, it was bad enough. That’s right, cry your hearts out liberals. Your precious Hillary Clinton tried to have something similar passed over a decade ago. Maybe Democrats and Republicans aren’t so different after all.

Trump is most likely going to be selecting the next Justice with Scalia’s passing - hopefully, he or she will be willing to defend constitutional rights (whether this person is conservative or liberal), and not this guy. So in one sentiment, our new President claims that he’ll seek a conservative-leaning Justice who will defend the Constitution. In another, he puts a homophobic evangelist on his short list of picks. Stop confusing and scaring America with your ridiculous tweets, Donald.

History in the United States shows that no matter how badly decrepit tyrants want to ban burning the American flag, it is protected by the First Amendment. You know Donald, freedom of speech, the constitutional right that allows you to spew shit out of your mouth and slander countless people without punishment. Taking away an individual’s American citizenship is protected by the constitution, as well. In 1958, a Supreme Court decision rejected the notion of taking US citizenship away as a form of criminal punishment, on the grounds that it violates the Eighth Amendment – protection for the people against cruel and unusual punishment.

So there you have it, it’s as clear as day – if Trump supported an act that would fine/jail an American and strip his or her citizenship, he is supporting something that is in clear violation of the First and Eighth Amendments. Perhaps you should read the Bill of Rights before you’re inaugurated Donald, it may help you realize the only true purpose of a US President: To protect the freedom of American citizens. I’ll even paste both amendments for you below. We all know how you hate to read walls of text:

Congress shall make no law respecting an establishment of religion, or prohibiting the free exercise thereof; or abridging the freedom of speech, or of the press; or the right of the people peaceably to assemble, and to petition the government for a redress of grievances.

Excessive bail shall not be required, nor excessive fines imposed, nor cruel and unusual punishments inflicted.

In response to Donald’s tweet, “progressive” left activists began burning flags in front of Trump International Hotel in New York (via Reuters). This protest included members of the Revolutionary Communist Party, not to be confused with the Communist Party of the United States. These commies also burned flags at the Republican National Convention in July. God Bless America! 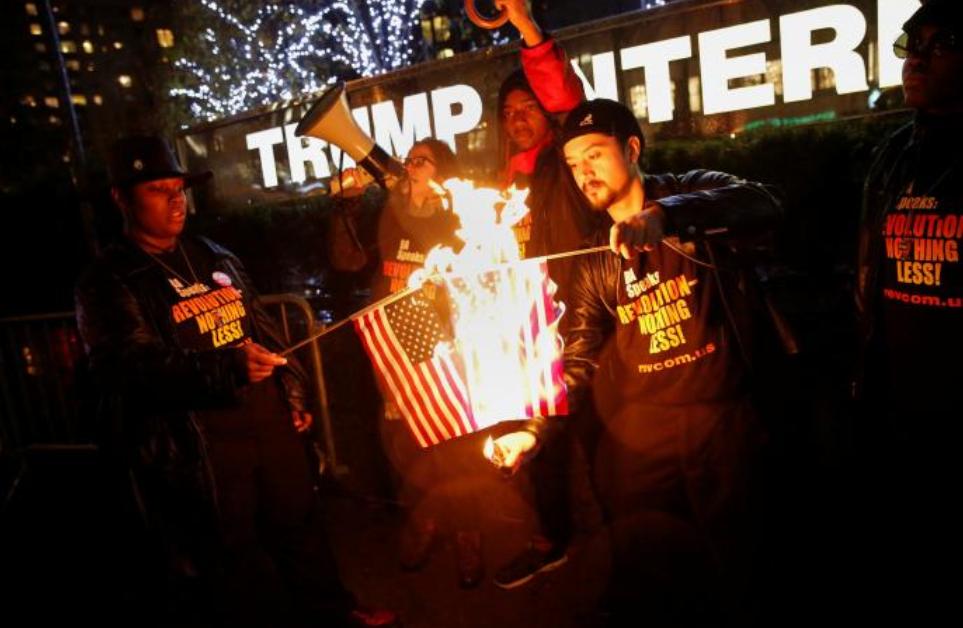 Do you see what you’ve done, Mr. President? You’re causing panic among the American people. You’re instilling fear in the hearts of the nation. You’re causing protests that include burning the great flag that we all know and love. If you tell Americans that we can’t do something (especially when it’s legal), we’re going to do it. Mobs of citizens differ very little from children in that sense: Don’t tell us that we can’t do something, or we will do it right in your face and challenge you to punish us for it. I don’t believe that these people are choosing to burn the American flag because they hate America. These people love this nation- they just happen to hate their government. The easiest way to show that hatred is shocking, and that’s the intent, is to burn the flag that represents the putrid State of the Union.

This is a polarizing time in American history. A loud-mouthed salesman trash talked his way to the Presidency. He’s promised great things for America, including the rebuilding of our infrastructure, jobs, a booming economy, and more. Over half of Americans hate him, claiming that he is a bigot, sexist, and unfit to rule as Commander In Chief. Those who wish to see Trump hanging by a noose mostly voted for a “moderate” life-long politician, and are flabbergasted by the presidential election results.

Our nation is split – it is divided. President Trump needs to unify the country as soon as possible, not threaten protesters with fines, jail time, and the stripping of citizenship. Please, Mr. President, I implore you: stop with the bullshit and bring Americans together. Appointing idiots to dismantle agencies and threatening people with jail time and exile isn’t going to cut it. We need to stand together to Make America Great Again. Take a quote from the iconic Republican President Abraham Lincoln, and let it sink in: “A house divided against itself cannot stand.”