In the era of #MeToo, where powerful politicians and producers have been ostracized for their alleged sexual misconduct, even big tech’s highest institutions aren’t safe from accountability.

Last week, members of the Silicon Valley’s elite issued announcements their company would be ending the rule of “forced arbitration”, a practice which prohibits workers to settling their claims of sexual harassment and assault internally through a third-party arbitrator effectively preventing due process in a court of law.

Following this month’s infamous Google Walkout, where 20,000 company employees and political activists across the globe protested the tech monopoly’s continued protection of accused sexual abusers within their ranks, CEO Sundar Pichai published a memo promising to make arbitration an “optional” process for employees to report their claims of sexual misconduct.

In less than 24 hours, Facebook released a similar announcements stating these practices, which studies show often lead to a biased result in favour of the corporation, is no longer a binding requirement. These tech giants follow the steps of Microsoft, Uber, Lyft, and BuzzFeed who also changed these same lawsuit restrictions earlier this year. 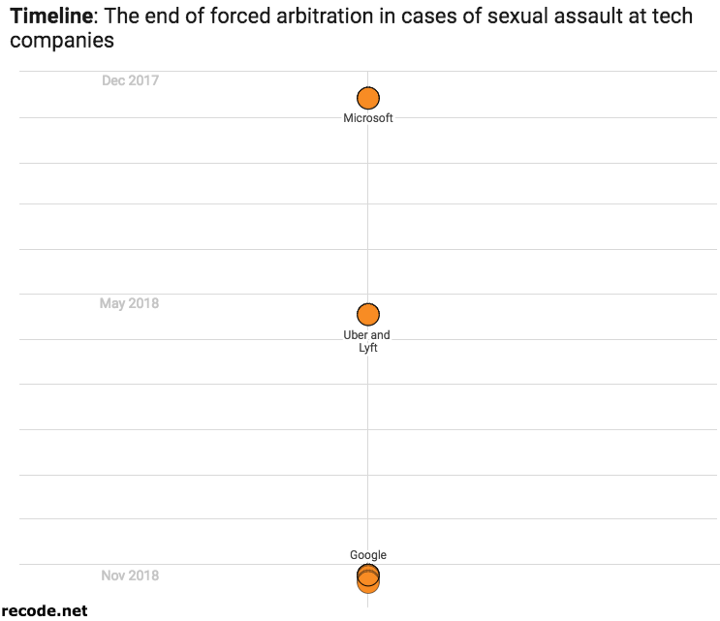 Readers shouldn’t deny this is good news on multiple grounds, whether you value individual liberty, worker’s rights, legal representation or justice for those victimized by their fellow citizens. Advocates, however, view the change as not only a late addition to greater employee representation, but a sign of ignorance for the so-called bigger issues in their message.

“The tepid policy change shows that leadership still does not understand how closely discrimination correlates to harassment,” said Tanuja Gupta, a Google employee and walkout organizer, in an email to Gizmodo. “Google chose to continue to preserve the present day structural imbalances of power that let harassment and discrimination flourish in all its forms.”

What Gupta’s referring to is perceived issues of discrimination, citing the recent inclusion report from Google which found a lack of diverse representation when it comes to the ratio of workers accounted for on intersectional bases in race, sex, gender, sexuality, eye colour, etc.

Is it curious that 2.5 percent of Google’s employees are black and 31.4% are female, meanwhile the top leadership is 74.5 percent male and 66.9 percent white? Sure, though this isn’t by design. Hiring on these intersectional grounds is itself considered a form of discrimination, whether it’s the majority or minority, which places Google in a tough position given the rate of minority applicants is, of course, minor by comparison.

From this, Google should ask the questions raised by James Damore, the company’s former tech engineer turned controversial political figure who authored the pro-diversity memo which suggested the company self-reflect as to why females don’t choose the tech industry when given their equal liberty. After all, it’s not gatekeeping when the gates are open and few even dare to enter. So why aren’t more women interested?

Aside from his arguments regarding the average psychological trends between the sexes, which obviously vary across individual cases, he stated “[Google’s] culture of shaming and misrepresentation” is responsible for being “unaccepting of anyone outside the echo chamber”.

We can consider this the feminist narrative of the “tech bro culture” where arbitration could fairly be considered their PR scapegoat for a normalized “rape culture”. It’s not radical to say Google’s limiting the rights for disproportionate assault victims isn’t a good look for their supposedly inclusive environment, and the employees started to notice.

“The Google walkout sent shivers down the spines of many companies that didn’t want to be the next in line,” said Cliff Palefsky, a California lawyer, speaking with The Intercept. “It demonstrated the power that tech workers have at this point in history.”

Through this recent elimination, big tech isn’t sending the signal of genuine concern for the victimized workers. If this were true, such an unrepresentative process would have been abolished in years past. Once the most unregulated fields in corporate America was placed under the spotlight, from activists to journalists alike, companies decided to save face to take control of the narrative.

“There’s no question in my mind these were very carefully considered decisions where they considered the upside risk of litigation, the downside risk of losing workers, and the potential for improved morale this might create,” said Joseph Sellers, a Washington-based employment lawyer, who released a statement earlier this week.

“In fact, even the positive news coverage is itself part of the calculation. I don’t see this as the beginning of a wave of excluding sex harassment or workplace discrimination claims from arbitration agreements,” he continued. “I’m not sure there are other industries where this kind of change in the rules would so fundamentally affect people’s attitude about their employers.”

This isn’t a problem exclusive to big tech. Journalist Susan Antilla writes this has been a legal precedent since the 1990s when major corporations, from Wall Street to Silicon Valley to the manufacturing, “have insisted that as a condition of being hired, an employee must agree to forego access to public courts and instead abide by mandatory arbitration in the event of a dispute over anything from the size of a bonus to age discrimination to assault”. It’s a sleight-of-hand trick where a worker’s economic opportunity entails submissive coercion to their internal justice system, which is ironically unjust.

This isn’t a bug of the free market, it’s a feature (hidden within the fine print).

“The Economic Policy Institute found, earlier this year, that since 1992, the share of non-union workers subject to mandatory arbitration has risen from just over 2 percent to more than 55 percent,” Antilla continued. She notes several US states, such as Maryland, New York, Vermont, and Washington, have limited these coercive practices, which could contradict the overarching Federal Arbitration Act if contested, according to lawyer Jonathan Hiles. This legal struggle, which extends back to the days of 1991’s Gilmer v. Interstate, is surely an uphill battle. The cultural fight, however, secured a willful repeal of such practice from those with a vested interest in its preservation.

#MeToo should consider this a great victory for workers denied their court day for being forced to sign the dotted line for work. Their voices were surely heard. “Being shut up was key to the whole system,” said Nancy Erika Smith, the attorney who represented Fox News anchor Gretchen Carlson in her harassment lawsuit against Roger Ailes. “I think the employer is going to have to struggle with doing things right for a change.”