U.S. Education Secretary Betsy DeVos is quite a wild west character. In the mind of this would-be-gunslinger, where a weapon lies behind every corner of American life, the plan for safety is simple – fight fire with fire. It should have come as no surprise when The New York Times and The Washington Post revealed her latest bright idea: allowing federal education funds to go towards putting guns in the hands of the nation’s teachers.

What could possibly go wrong? Besides the DOE’s trampling over established tax protocols and legal precedent, of course. In 2015, Congressional lawmakers passed what’s known as The Student Support and Academic Enrichment Grants (SSAEG), the $1 billion education fund intended to enrich impoverished American schools via access to mental health treatments, technological innovation, artistic ventures, and various other means specifically aimed at creating academic opportunities. In an unprecedented move by the government, this enrichment now includes arms sales — a reversal of longstanding laws that prevent school funds going towards weaponry.

In fact, TIME cited the recent case of The STOP School Violence Act, a piece of domestic security legislation from early March which allocated $50 million a year towards the nation’s public school districts so long as funds aren’t invested in firearms. Due to that gridlock, this particular pool of money is being left untouched. The same can’t be said of these SSAEG funds, which were passed through Congress under The Every Student Succeeds Act (ESSA).

Instead, the government is trying to argue that, due to the unspecified nature of SSAEG on gun restrictions, there’s simply not enough there to stop DeVos from seeing her anarcho-libertarian gun-filled playground come to life. The reason for these gun sale omissions being that nobody in their right fucking mind would have believed that society would reach the point of arguing about whether it’s right to arm school teachers.

“When Republicans and Democrats came together to pass the bipartisan Every Student Succeeds Act, we were clear that these grants were intended to help foster safe, healthy and supportive environments that improve student learning — not prop up the N.R.A. and gun sales,” Ms. Murray said in a statement provided to The New York Times.

She was joined in a rejection of the proposal by Sen. Chris Murphy‏ (D-CT):

The Dept of Ed funding bill is on the floor right now and I’m introducing a last minute emergency amendment today to stop Devos’s plan to arm teachers.

My lord - we can’t let this happen.

“My lord — we can’t let this happen,” Murphy said.

The government claims it isn’t happening. Following the scandal surrounding GOP devotees and notorious comedian Sacha Baron Cohen, who recently tricked gun-rights activists into supporting child soldier programs intended for those over three years old on his series “Who Is America,” it’s understandable why the government remains hush on initiatives aligning children with firearms.

“The department is constantly considering and evaluating policy issues, particularly issues related to school safety,” Liz Hill, a spokeswoman for the Education Department, told The Times. “The secretary nor the department issues opinions on hypothetical scenarios.”

But this hasn’t stopped multiple inside sources within the DOE issuing leaks of their pro-gun plans to the press. These department officials, supposedly protected under anonymity, told The Times it’ll be the first time the government will “have authorized the purchase of weapons without a congressional mandate,” according to their internal discussions.

They argue the program’s cited “drug and violence prevention” could be a tough narrative to spin for the Trump administration. It’s likely they’ll simply just polish off the NRA talking point of “the only way to stop a bad guy with a gun is with a good guy with a gun” and file this under their “improving school conditions” obligation. The evidence suggests a guns-in-schools plan will only result in a more dangerous environment, not a safer one. Just examine any ol’ study which finds: Where there are more guns, there are more gun deaths. 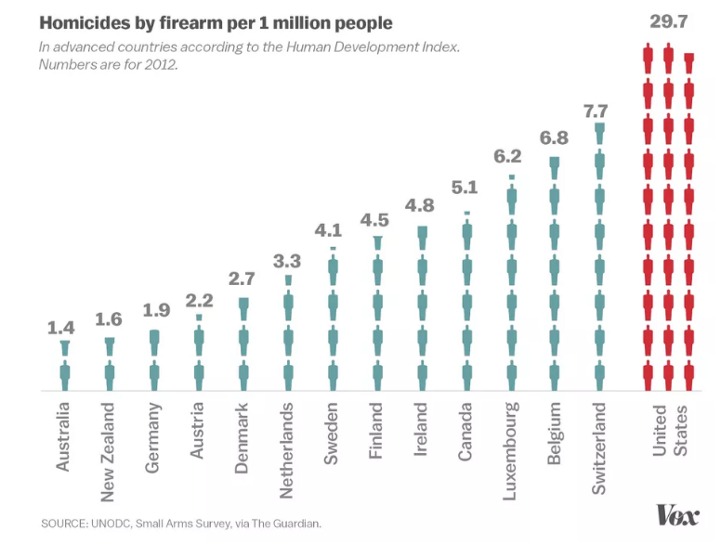 According to a recent Vox investigation, “mass shootings actually make up a small fraction of America’s gun deaths, constituting less than 2 percent of such deaths in 2013”. They continue to cite a recent CNN story which found that “the US makes up less than 5% of the world’s population, but holds 31% of global mass shooters.”

You must also admit that being only 5% of the world and nearly a third of all of its mass shooters is a problem.

Consider that same Vox investigation found among the countries and territories with the highest numbers of civilian firearms, the U.S.’ next competition is Yemen — yes, that failed state of a country that’s currently embroiled in both civil wars between Islamist-Jihadist factions and forced famines at the hands of imperialist foreign policy. The analysis, brought forth by Small Arms Survey, doesn’t paint America as that shining city on a hill. Unless the shine is from persistent gunfire.

“Within the United States, a wide array of empirical evidence indicates that more guns in a community leads to more homicide,” David Hemenway, the Injury Control Research Center’s director, wrote in the book Private Guns, Public Health. This is supported by a cited 2013 study by a Boston University School of Public Health researcher which found, “after controlling for multiple variables,” each percentage point increase in gun ownership correlated with a roughly 0.9 percent rise in the firearm homicide rate.

It shouldn’t need to be debated that if you aim for the wild west, you’re going to have the wild west. If you’re a principled conservative or libertarian who shrugs and calls this the price of individual freedoms, that’s a tenable position we can debate. You lose respect when you can’t admit freedom is a messy reality to bear. Otherwise, those weapons sales will be locked and loaded with your money in just a matter of time.